Iranian comment on foreign military forces in the Gulf 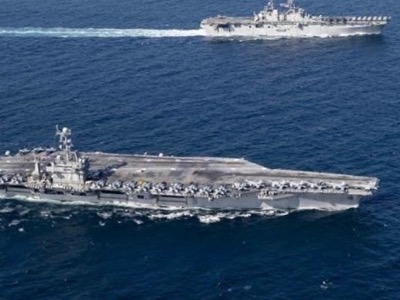 I am writing to you with regard to the recent alarming security situation in the broader Persian Gulf region. There are indications that certain circles from outside of this region – through fabrications, disinformation, fake intelligence and fake news, relying on the support of their allies in the Middle East as well as dispatching naval forces to the region – are pursuing their illegitimate interests by sowing further division and creating more mistrust between regional countries in the Persian Gulf, as well as fomenting insecurity and escalating the already high tension in this volatile region. If unchecked, the current situation might – sooner or later – go beyond the perimeter of control and thereby lead to another unnecessary regional crisis.

The Islamic Republic of Iran has repeatedly warned about the mischievous intentions of such circles and the wide-ranging regional and international ramifications of their objectives. In turn, Iran has always rejected and continues to reject conflict and war. Iran will never choose war as an option or strategy in pursuing its foreign policy. It should, however, be obvious that if war is imposed on us, Iran will vigorously exercise its inherent right to self-defence in order to defend its nation and to secure its interests.

In light of the above and at a time when the region is in turmoil with no bright prospect in sight, the international community in general, and the United Nations in particular, cannot and must not remain indifferent with regard to addressing the root causes of the current state of affairs. If the issues are not thoroughly addressed, the eruption of any possible conflict will soon cross over from the regional level and will definitely have serious and extensive implications on international peace and security.

Inaction – a lose-lose approach – is not an option and can lead to a disaster that must be avoided. The only solution is in fact the adoption of a win-win approach through active engagement. Accordingly, in the view of the Islamic Republic of Iran, the current complex security environment in the region can be eased and ultimately addressed exclusively through constructive engagement and dialogue between the littoral States of the Persian Gulf. Such a regional dialogue should be based on mutual respect as well as generally recognized principles and shared objectives, notably respect for the sovereignty, territorial integrity and political independence of all States; the inviolability of international boundaries; non-interference in internal affairs; the peaceful settlement of disputes; the impermissibility of threat or use of force; and the promotion of peace, stability, progress and prosperity in the region.

As has been stated by Mohammad Javad Zarif, Minister for Foreign Affairs of the Islamic Republic of Iran, the establishment of a collective forum for dialogue in the Persian Gulf region to facilitate engagement is long overdue. By promoting understanding, regional dialogue can lead to agreement on a broad spectrum of issues, including confidence- and security-building measures; combating terrorism and violent extremism; and ensuring freedom of navigation and the free flow of energy. It eventually can include more formal non-aggression and security cooperation arrangements.

In this context, and recalling that paragraph 8 of Security Council resolution 598 (1987) has entrusted the Secretary-General to examine “measures to enhance the security and stability of the region”, you, by operationalizing this paragraph, could furnish the necessary international umbrella for launching such a regional dialogue.

It would be highly appreciated if you could have the present letter issued as a document of the Security Council.

Permanent Representative of the Islamic Republic of Iran to the United Nations.