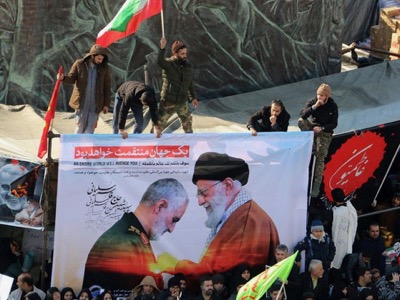 Upon instructions from my Government and pursuant to my letters dated 3 and 7 January 2020 regarding the terrorist attack perpetrated by the armed forces of the United States of America against Martyr Major General Qasem Soleimani in Iraq, I would like to inform you that, on 8 January 2020, in the early morning hours (Tehran time), in exercising our inherent right to self-defence in accordance with Article 51 of the Charter of the United Nations, the armed forces of the Islamic Republic of Iran took and concluded a measured and proportionate military response targeting an American air base in Iraq from which the cowardly armed attack against Martyr Soleimani was launched. The operation was precise and targeted military objectives, thus leaving no collateral damage to civilians and civilian assets in the area.

Seriously warning about any further military adventurism against it, Iran declares that it is determined to continue to, vigorously and in accordance with applicable international law, defend its people, sovereignty and territorial integrity against any aggression.

I should also avail myself of this opportunity to reiterate the full respect of the Islamic Republic of Iran for the independence, sovereignty, unity and territorial integrity of the Republic of Iraq.

I should be grateful if you would have the present letter circulated as a document of the Security Council.

Permanent Representative of the Islamic Republic of Iran to the United Nations.

Iranian comment on foreign military forces in the Gulf