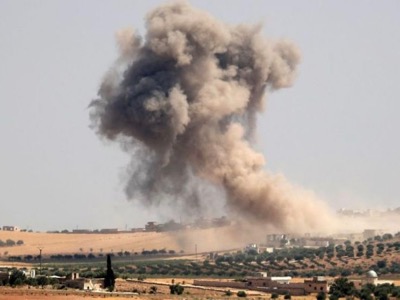 According to reports, at 15.00 on August 31, two USAF aircraft carried out a raid on the command centre of the Hurras al-Deen armed group located 7 km northeast of the city of Idlib. US Central Command spokesman Lt. Col. Earl Brown said the operation targeted “al-Qaeda leaders responsible for attacks threatening US citizens, our partners, and innocent civilians.” He added that “the removal of this facility will further degrade their ability to conduct future attacks and destabilise the region.” Lieutenant Colonel Brown further said that the United States and its “allies and partners will continue to target violent extremists” because “northwest Syria remains a safe haven” for terrorists.

At the same time, the Russian Defence Ministry’s Centre for the Reconciliation of Opposing Sides in Syria said in a statement that the US air strike was carried out in violation of the Idlib de-escalation agreements and that Russia and Turkey, which have military experts in the region, had not been notified of the planned attack. Besides destruction, witnesses report numerous casualties, among them children, in Maarat Misrin and Kafer Haya following the US-led air strike.

Shortly before the air raid in Idlib, the US Department of State issued a statement on the outcome of talks between Secretary of State Mike Pompeo and the UN Secretary-General’s Special Envoy for Syria Geir Pedersen, according to which “the Secretary expressed concern over the horrific effects of attacks by the Assad regime and its allies against civilians, humanitarians, and infrastructure in Idlib, and he underscored the need for an immediate return to a ceasefire.”

The US’s inconsistent and contradictory actions in Idlib are puzzling and alarming. On the one hand, US representatives are using all the available venues, including the UN, to demand an end to the escalation of tensions and the suffering of civilians in Idlib, disregarding the unprecedented concentration of terrorists from the UN Security Council’s list of terrorist organisations there. On the other hand, the United States has conducted an air strike that has caused numerous casualties and major destruction. Are US bombs “better” than Russian ones? Are the terrorist targets attacked by the US more legitimate than the terrorist facilities destroyed by the Syrian government forces supported by Russian aircraft? We believe it is reasonable to expect that the UN humanitarian experts will take into account the consequences of the US operation in Idlib when preparing their reports and that they will duly inform all members of the UN Security Council of the effects of that operation on civilians and civilian infrastructure, and also assess its compliance with international humanitarian law.