The Carnegie Endowment for International Peace

Created in 1910 at the initiative of iron manufacturer Andrew Carnegie, the foundation named after him became, in one century, one of the richest think tanks (center for research, propaganda and spreading of ideas, generally of a political nature) of the world. Headed by a long succession of former secret service leaders and closely linked to some 50 transnationals, the Carnegie Endowment carries out research in the field of international politics and promotes “liberal” economic policies in Russia and Latin America.

Regarded as the richest man of the world in the early 20th century, Andrew Carnegie embodies the American dream in the course of the industrial revolution. Born in Scotland in 1835, in a family of weavers, he immigrated to the United States with his family in 1948. After working as a miller in Pittsburg since he was 13 years old, he entered the Railroad Company of Pennsylvania where he immediately had different responsibilities.

During the Secession War (1861-1865, or American Civil War) he supervised the railroad transportation of troops from the North and, at the end of the hostilities, he made a fortune after he left the Railroad Company and started to build iron bridges to replace the wooden ones. Always in favor of technical progress, he quickly abandoned this activity to engage in the production of steel, thus becoming the most important blacksmith master of the world.

Being a typical industrialist, Andrew Carnegie defended the right of his workers to form unions as he imposed very hard working conditions. As a supporter of the social Darwinism of Herbert Spencer, he was convinced that most of the people can make a fortune if they have the necessary education and courage, although he thought the rich were obliged to help the poor.

He financed the construction of 3,000 public libraries that he offered to local communities and he founded an institute of technology in Pittsburg, today known as the Carnegie Mellon University. Also convinced of the value of international law to solve conflicts among nations, he financed the construction of the Peace Palace of The Hague, destined to serve as venue of the International Court of Justice.

Linked to the Republican Party, in 1910 - being 75 years old - he decided to create the Carnegie Endowment for International Peace (CEIP) on the advice of his friends Elihu Root (former War Secretary of William McKinley and former State Secretary of Theodore Roosevelt) and Nicholas M. Butler (Rector of Columbia University). Carnegie was very fond of Root, who had been one of the main promoters of the Court of The Hague, and he appointed him director of his foundation. Shortly afterwards, in 1912, Root was granted the Nobel Peace Prize.

However, his conception of peace has to be placed in the context of that time. William McKinley started the war against Spain to “free” Cuba and the Philippines, while Theodore Roosevelt (Nobel Peace Prize in 1906) annexed Panama, and invaded Santo Domingo and Honduras. All of this, of course, was done in the name of the fight against European colonization.

Originally, the foundation was divided into three departments:

- International Law and Resolution of Conflicts.

- Causes and Consequences of the War. 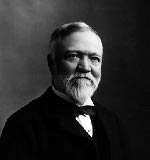 No matter how it was, these efforts could not stop the process that led to World War I.

Carnegie died in 1919 after he sold his iron and steel factories to banker J. P. Morgan and Butler succeeded Root as general director in 1925. The Carnegie Endowment was very active in favour of the signing of the Briand-Kellog Pact against the war and Butler obtained the Nobel Peace Prize in 1931.

In parallel with these events, in 1919, Elihu Root created the Council on Foreign Relations (CFR) for which the Endowment gave most of the funding [1]. 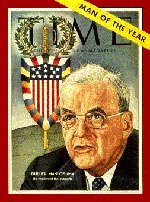 John Foster Dulles
named “Man of the Year by the Time Magazine (United States) in 1954.

In 1946, Butler left the scene, making the way for John Foster Dulles (President of the National Council of Churches, ambassador to the United Nations and future State Secretary), while Allen Dulles (former OSS leader and future director of the CIA) was elected as president pf the CFR. The activities of the brothers were strongly supported by the Rockefeller Foundation which John Foster presided over in 1948.

By the early 1970s, Thomas L. Hugues (former director of the State Department Secret Service) became President of the Carnegie Endowment for International Peace (CEIP), while Milton Katz (former OSS agent and then in charge of the joint programs of the CIA and the Ford Foundation) [2] and, later, John W. Douglas (former deputy Secretary of Justice) held posts as directors.

The Carnegie endowment stopped its flagship publication, the law magazine International Conciliation, and acquired Foreign Policy, a magazine founded by Samuel Huntington [3] , whose headquarters was moved from New York to Washington.

In 1971, the Endowment founded the Arms Control Association and the following year it created the German Marshall Fund of the United States, a transatlantic think-tank subsidized by the Federal Republic of Germany. In 1981, it set up the Institute for International Economics, a research center on the positive effects of globalization.

In 1991, as the Soviet Union collapsed, Morton I. Abramowitz (former director of the US State Department Secret Service) was elected President of the Carnegie Endowment and he appointed Robert Carswell (former agent of the Secret Service Office of the Navy and main negotiator during the hostage crisis in Iran) its director. 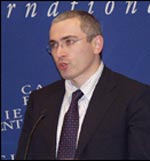 Mijail Khodorkovsky
speaking at the Carnegie Center in Moscow shortly before his arrest.

In 1993, the Carnegie endowment opened an affiliate in Moscow that advised Russian President Boris Eltsin in the process of privatization of the ex-Soviet economy through people like Yegor Gaidar, which earned it the nickname of «Trojan Horse» of the CIA. The Endowment also created the G-50 group, which brought together the heads of 50 transnationals operating in Latin America. This club gives advice to different governments and promotes the Free Trade Area of the Americas (FTAA) [4] It is headed by Venezuelan former Minister of Industry and Trade Moisés Naím, who is also director of Foreign Policy. 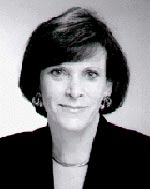 In 1997, Jessica T. Matthews (former director of Global Affairs at the National Security Council), was elected president of the Endowment and she quickly appointed William H. Donaldson (member of the Skull and Bones [5] and close friend of the Bush family, future president of the Securities and Exchange Commission - SEC) as director. This new team began to work in the transformation of Foreign Policy into a magazine for the public and tried to set up in China a subsidiary similar to that in Russia. For this purpose, they established relations with the Institute of Strategic Studies of the Party School in Beijing and with the Academy of Social Sciences of Shanghai.

The Carnegie Endowment is currently one of the richest foundations of the United States. It employs 150 researchers and publishes numerous reports. Foreign Policy is now published not only in English but also in Arabic, Spanish, Greek, Italian, Portuguese and Turkish with a total of 170,000 copies. It is the only American think-tank specialized in foreign policy intended for a global public.