The War of Civilizations

One year after the plundering of the Baghdad Museum, the Iraq puppet Government Provisional Council maintains that the extent of the robbery was overrated and that the Coalition forces have recovered almost all the stolen objects. The truth is quite another. With the Pentagon’s complicity, a gang of traders seized what best they could during the fall of the regime. Later, they organized wide indiscriminate excavations in archeological sites, especially Assyrian and Babylonian. Additionally, the U.S. forces have destroyed a large number of Omeyan and Abaside monuments during recent urban clashes against the resistance. Does the geopolitical remodeling of the Middle East pass for the destruction of cultures? 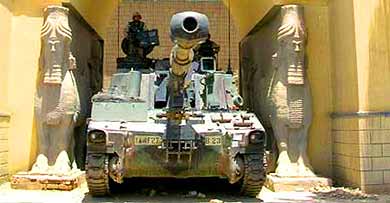 In a statement dated Thursday May 20, 2004 to the German news agency (DPA: Deutsche Press Agentur), the Minister of Culture of the Iraq Government Provisional Council Mufid Jazairi pointed out that they still had no news about the 9 000 to 10 000 works of art stolen from the Baghdad Museum.«We are going to find many of the works of art when the security conditions improve», he optimistically added [1].

Furthermore, the main museum pieces - a collection of jewels of the 8th Century known as the “Nimrod’s Treasures”, were shown with great splendor last July 3. During three hours and in the presence of hundreds of foreign journalists, ambassador L. Paul Bremer III and the Coalition’s archeological council eruditely explained that out of the 180 000 museum pieces only 3000 were missing of which just 47 had a unique value [2].

Jacques Chirac’s statements, which branded the thefts of the Iraqi museums as crimes against humanity, and then UNESCO’s volatility [3], were but hysteric demonstrations of anti-Americanism.

The incriminations against an art trading group - the American Council for Cultural Policy (ACCP), which we disclosed a year ago - were therefore defamatory (See French article “Who planned the plundering of Iraqi national museums?” Voltaire, April 17, 2003). At least, this is what the occupation forces and their collaborators would like us to believe. This is the soothing propaganda that some of our colleagues are using again.

Actually and contrary to the U.S. official releases, the issue is far more serious than what we had indicated. The plundering of the Iraqi works of art was well planned in advance and performed in complicity with the U.S. troops.

This simultaneously includes systematic raids of the preserved pieces in the national museums, and, particularly, industrial excavations in archeological sites. Besides, the Coalition forces have destroyed several monuments and locations, sometimes due to ignorance and very often deliberately.

In order to understand what is at risk in this controversy, let’s recall the period prior to the war. A decade ago, Saddam Hussein’s brother-in-law Irchad Yassine was in the trade of discretely exporting Iraqi works of art. Since 1994, U.S art traders, grouped around lawyer Aston Hawkins [4] within the ACCP, gained ownership of this network.

Yassine would sell them the main pieces of the Assur Museum. They were also interested in the art of all the regions in conflict, mainly Afghanistan. Upon the announcement of the war, they would receive orders from very rich clients who specified in a catalogue the museum pieces they wanted to buy.

Scientists from the world over rallied in order to prevent the announced plundering. Colin Powell asked his adviser Thomas Warrick for an opinion. In the Spring of 2002, the latter would submit a report entitled Project for the Future of Iraq where he pointed out that a period of anarchy would ensue after the collapse of Saddam Hussein’s regime and that traders would avail themselves of it to plunder the museums. Powell sent out the report to the White House and the Pentagon [5].

During that period, the number of mails sent by scientists to political leaders was increased. Also prestigious experts such as McGuire, Gibson (Oriental Institute, Chicago University) or the Director of the British Museum Neil Macgregor became involved.

As the tragedy seemed inevitable, French parliamentarian Didier Julia - also an archeologist - visited Iraq in February 2003 to persuade the national curator to protect their heritage [6]. He arranged the transfer of thousands of works to caves which were later bricked up. Julia, who disguised the purpose of his trip, was harshly criticized by his party - the UMP - where he was accused of collusion with the Saddam Hussein’s dictatorship.

The Elysium palace published a communiqué to feign its “astonishment”. In fact, the parliamentarian, whose action was supported by French scientists, particularly those at the Archeologia-Magazine, had previously informed Jacques Chirac of this and enjoys the “leniency” of his service [7].

Just as it was announced, Baghdad fell victim to anarchy after the fall of the President. The Coalition forces only ensured the protection of the Oil Ministry and the headquarters of the repression service [8]. Experienced thieves leaped on the national museums and stole everything that could be taken.

They also plundered libraries and started fires to prevent any inventory from being done about the stolen property.

Dishonest businessmen and journalists were arrested here and there, but the ACCP network was not harassed, so that in practice the Coalition guaranteed them the monopoly of the trade as well as top profits. In June 2003, the Coalition finished removing the rubble of the Iraq National Bank, destroyed by bombing, and reached the strong-rooms where they found part of the art works hidden by Iraqis and French.

The antiques director Nawada al-Mutawali, revealed the place where the rest had been deposited and then the collections were restituted. However, there are a few thousands missing [13], especially seal rings and cuneiform boards which had remained in the museum and were being the object of study as well as some important pieces, a list of which has been informed to the Interpol.

During this period, the group of traders connected to the Defense Department has gone on with their stealing. Not in the museums any longer but in the archeological sites. Indiscriminate excavations have continued to take place everywhere. Dozens of thousands of objects have been dug up and brought out of the country and sold in parallel markets. Ironically, the country’s boundaries have been officially closed [14].

The thieves act carefully so as not to spoil the merchandise but they don’t worry about the context of their findings. They’re only interested in the esthetic and commercial value. For archeologists, this is a new calamity. These objects are deprived of their history and their discovery will not contribute any new knowledge about the disappeared civilizations [15]. The Coalition’s cultural adviser, Italian ambassador and archeologist Piero Cordone, is trying to stop the indiscriminate excavations but he abandoned the idea when his convoy was attacked by U.S. soldiers who killed his interpreter [16].

For the Iraq people and the memory of humankind, the tragedy doesn’t stop there. If it is true that the Coalition forces took precautions not to bomb historic sites [17], they did destroy a large number of them later and nobody knew it, which is proof of an ignorant vandalism and savage revenge.

Without any doubts, the biggest scandal was to cover Ur with concrete. The U.S Air Force built a military base on the site where the city of Eridu had existed for six thousand years, the place where biblical Abraham had lived. Rightfully or not, the Iraqis interpret such destruction as a final vengeance of the Israel-U.S. troops against Babylonia.

They remember how Ariel Sharon’s troops proceeded to systematically destroy the archeological sites when they invaded Lebanon. Moreover, during the recent clashes in the south, not against Saddam Hussein’s dictatorship this time but against the people’s resistance, the Coalition forces have destroyed a large number of Islamic, Omeyan and Abaside monuments.

In the course of urban clashes, the U.S. army has been clearing the field by destructing buildings. In the face of the historically unprecedented plundering and destruction, there is nobody else left to turn to and question but Washington’s attitude.

Does the geopolitical remodeling of the Middle East pass for the destruction of the entities and the local cultures?

[6] Former student of philosopher Martin Heiddeger, Didier Julia is a philosopher and Egyptologist. Autor of the works about Fichte and director of the Dictionnaire Larousse de philosophie. He is Gaullist lawmaker for Seine-et-Marne since 1967

[8] However, a 5-page memorando signed by General Jay Garner on March 26, 2003, indicated a list of sites that had to be protected. In it, the National Museum appeared in the second place. This was not respected, since Garner’s orders were effective only after the fall of the regime. See “Troops were told to guard treasures“, by Paul Martin, in The Washington Times April 20, 2003

[13] In a statement to the 49th International Assyriology Meeting held at the British Museum on July 11, 2003, Colonel Bogdanos admitted that close to 10 500 pieces from the Baghdad Museum were missing, while during his press conference he had only mentioned 35. See Update by Colonel Matthew Bogdanos on the situation at the Iraq Museum. This document can be downloaded in Doc. Format

[14] As these pieces had not been listed in an inventory, it was imposible to know their exact number. However, taking into consideration the increased number of sales registered in the West, of pieces allegedly found in barns, experts can make estimates