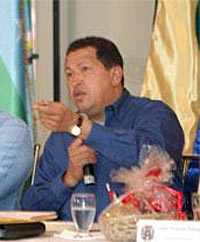 Venezuela’s President Hugo Chávez responded to recent statements by high-level US officials, reaffirming Venezuela’s desire for dialogue with the US despite serious political differences. “A high-level functionary of the US government has said that they would like to have constructive relations with Venezuela...Welcome!” said the President during a Tuesday evening television address.

Earlier that day Assistant Secretary of State for the Western Hemisphere Roger Noriega told a meeting of the Council of the Americas in Washington, D.C. that the United States has sought “constructive bilateral ties,” with Venezuela in the past, and is “still open to a normal working relationship with his government,” said Noriega, adding that from now on the US would change its strategy of permanent confrontation with Caracas.

“But we will not and must not let any solitary leader’s very personal agenda distract us from pursuing our positive program in the region,” warned the Assistant Secretary of State. The Council of the Americas is an advocacy group representing private US business interests throughout the Americas.

US-Venezuela relations have been tense since the US recognized a coup against Chávez in April, 2002.

When he was subsequently returned to office by massive popular mobilizations and loyal elements of the military, Washington declined to admit any wrongdoing, with then-National Security Advisor Condoleezza Rice suggesting that Chávez himself was to blame. Documents recently obtained through the Freedom of Information Act by lawyers Eva Golinger and Jeremy Bigwood from www.venezuelafoia.info reveal that the CIA had prior knowledge of the coup, but declined to warn Chávez.

Also speaking to the Council of the Americas, US Secretary of Defense Donald Rumsfeld said that the US will not invade Venezuela to remove Chávez from power. Rumsfeld also responded to a question from the audience alleging that the Venezuelan people appear to be incapable of removing Chávez themselves, suggesting perhaps the US should step in to “bring some sanity there.” “You indicated you don’t think anything can happen unless the United States does something. I don’t know that I agree with that,” replied the Defense Secretary. According to Rumsfeld, “down deep inside” most Venezuelans would like to be living in a free and widely respected country. “And my guess is they will again in my lifetime,” he said. Venezuela’s approach to government is “not a winning approach,” added the Defense Secretary.

Chávez welcomed these comments as optimistic, noting that Washington emits similar signals towards Venezuela “every once in a while.” “Hopefully no one will come out with further statements this evening insisting on disrespecting our country,” said Chávez.

“We also want to have constructive and positive relations with every country in the world,” said the Venezuelan President, “in conditions of respect for differences, equality, and without subordination or imposition of any kind...because this is a free, sovereign country and here there is a dignified people that merit respect,” he added. Noriega’s and Rumsfeld’s comments came on the heels of Secretary of State Condoleezza Rice’s first Latin American tour in which she visited Colombia, Brazil, Chile, and El Salvador.

The trip itself was seen by some analysts as an attempt at winning over South America’s emerging Left caucus including Brazil, Argentina, Chile, and Uruguay, all countries that have close ties to Venezuela and have so far been resistant to US attempts at isolating Chávez. On Monday, Chilean Interior Minister José Miguel Insulza was confirmed as Secretary-General of the 34 country Organization of American States (OAS). Insulza’s competitor, Meixan Foreign Minister Luis Ernesto Derbez pulled out last Friday when it became clear that he would lose Monday’s vote.

Insulza had been actively promoted by Venezuela, whose spirited campaigning on Insulza’s behalf is likely responsible for getting him the support of the Caribbean, a region usually expected to vote automatically for the US favorite. Insulza’s victory was also seen by many analysts-and the Venezuelan government-as a victory for Venezuela and a defeat for the US, which Rumsfeld’s and Noriega’s softer comments appeared to reflect.

Nonetheless, given Rice’s pressure on Insulza shortly before Derbez’s withdrawal, the election was likely not as much of a defeat for Washington as it first appeared.