The Opus Dei Sets Out to Conquer the World

It was during the dictatorship of General Francisco Franco in Spain that priest José María Escriva de Balaguer founded and established the grounds of the Opus Dei [7]. As Franco’s spiritual advisor [8] and thanks to the organization he founded, Balaguer chose and trained the elite members of the Franco dictatorship until he controlled the essence of powers. Later, Balaguer was sent to the Vatican and from there he worked to spread his power to Latin America. The Opus Dei carries out a gigantic campaign to tame those Catholic priests regarded as “guilty” of appreciating Marxist analyses and opposing military or Catholic dictatorships. 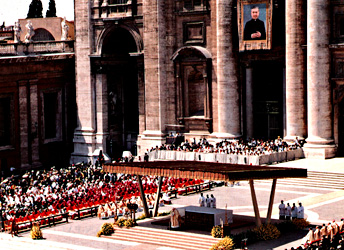 Officially, the Opus Dei is only an international Catholic organization. Its work would be limited to the spiritual activities of its 79,303 members (1,506 priests, 352 seminarians, and 77,445 laypersons). The members that the Opus Dei chooses are the cream of European and Latin American society. They include owners of big multinational companies, press and finance magnates, as well as heads of state and government. The Opus Dei demands discipline and complete obedience from them. Also, while it pretends to ignore their “personal” political activities, it can use them to impose its values to the peoples.

This sect was founded on October 2, 1928, by a young Spanish Catholic priest of modest origin, José María Escriva de Balaguer. It was an effort of these followers to achieve saintliness by participating in establishing a theocratic regime, in which Escriva would be the prophet. The civil war was for them the ideal and unexpected opportunity to establish the Catholic state of their dreams. Escriva became the spiritual advisor of General Franco. Together, they would restore the old principle: “Cujus region, ejus religio” (such government in a state, such religion in this state).

The objective of the Opus Dei was to choose and to train the elite members of the Spanish dictatorship to control the essence of power. Thus, in the 1960s, the pro-Franco government of Admiral Carero Blanco was described as “one-colored”: out of its 19 ministers, 12 belonged to the Opus Dei. Although Escriva de Balaguer had no direct responsibility in the government, “Father” Balaguer never stopped giving his advice to the Generalissimo. It was him who recommended the re-establishment of the divine right monarchy and Franco was proclaimed president for life.

Balaguer envisioned being proclaimed regent after the death of the Caudillo. For that purpose, he had himself ennobled in 1968 under the title of Monsignor Escriva de Balaguer, Marquis of Peralta. However, the plan changed. The following year, Franco appointed Prince Juan Carlos I of Borbón (today, King of Spain) to succeed him. Anyway, Monsignor Escriva de Balaguer had other ambitions. By the end of World War II, he traveled to Rome and, once there, he tried to consolidate and extend his power to Latin America. Oratories and chapels of Opus Dei were installed in Spanish embassies, something that would facilitate contact among local elites. Escriva de Balaguer also gave spiritual advice to those who wanted to fight Communism and to strengthen the Catholic faith in their country. It was in these circumstances that Balaguer rushed to Santiago de Chile in 1974 to celebrate Thanksgiving with three of his “spiritual sons”: General Pinochet, Admiral Merino and General Leigh.

Another of Balaguer’s concerns was to spread his “Work” in Europe but Spain’s diplomatic isolation partly limited him. His objective was to again create an anti-Communist International (like the one created by Franco, Mussolini and Hitler during the Spanish civil war), to get Franco’s Spain out of its isolation and to favor European construction.

In 1957, he had Archduke Otto von Habsburg-Lothiringen found the European Center of Documentation and Information (CEDI) in Madrid, and, thanks to two other of his “spiritual sons”, Alcide de Gaspari and Robert Schuman, Balaguer played a role in the drafting of the treaty of Rome, first foundation for the creation of the European Community. Like Francisco Franco, “Father” Balaguer died in 1975. It was a mistake to think that the Opus Dei would disappear with them in hell. A height of this sect was seen three years later, in 1978. Taking advantage of the intrigues that paralyzed the Holy College, the Opus Dei managed to convince the cardinals to elect one of its preachers as Pope: the archbishop of Cracow, Karol Wojtyla, known as John Paul II. From that moment on, the Opus Dei was able to use the diplomatic apparatus of the Vatican and the religious reorganization of the Catholic Church for its own advantage.

John Paul II created an office exclusively formed by priests of the Opus Dei and devoted himself to dismantle any resistance in the heart of the Church. With that purpose, he isolated – “for health reasons” – the Superior of the Jesuits, father Pedro Arupe, and appointed a new provisional administrator of the same order, Father Dezza – who was a member of the Opus Dei - to replace him. However, he did not dare to dissolve the Society of Jesus. As part of a gigantic process of ecclesiastical control, he also tried to control Latin American priests who shared or appreciated Marxists analyses and who opposed Catholic dictatorships.

Two people served Balaguer’s policy with zeal: Monsignor Josef Ratzinger, prefect of the Order for Doctrine and Faith, and Monsignor Alfonso López Trujillo, president of the Pontifical Council for the Family. A surveillance center was set up in Bogotá, Colombia, with a powerful computer of strategic capacity that was connected to the Vatican. All data and political activities of the Latin American priests and religious people were registered. It was due to that intelligence data and information that the “death squads” assassinated father Ignacio Ellacuria or Monsignor Oscar Romero in El Salvador. Among other things, John Paul II promulgated a new code of canon law, whose main architect was the prelate of the Opus Dei, Monsignor Julián Herranz-Casado, who was later appointed president of the Pontifical Council for the Revision of the Legislative Texts.

It was him who gave the “Work of God” a statute that matched its ambitions: “The Apostolic Prelature”. From that moment on, the Opus Dei members escaped the authority of the bishops in the territories where they reside. They only obey their religious superior, prelate or the Pope. This organization has become a control instrument of local churches that serve the temporary power of the Vatican – something that reminds of another sect in the past that ruled with religious terror in the Spain of the 16th Century before imposing and exporting its fanaticism to the universal Church: the Inquisition [1].

The Pope entrusted the administration of the “Order for the Cause of the Saints” to another member of the Opus Dei: Rafaello Cortesini. John Paul II began the canonization process of Escriva de Balaguer and proclaimed his beatification on the day that marked his birthday, May 17, 1992. This masquerade caused a controversy in the Roman Church. All testimonies and stories that opposed the “cause of the saint” were rejected unheard while 6000 letters in favor of his beatification ware included in the file. This letters came, mainly, from the 69 cardinals, 241 archbishops, 987 bishops and many heads of state and government.

[1] Inquisition: Ecclesiastical tribunal that was established to judge and punish the crimes against faith.

The Roman Curia and the Body of Christ

The Vatican wants to join the Schengen zone