The presidents from the now five member nations of Mercosur attended Tuesday night’s event in Caracas for the official inclusion of Venezuela in to the South American trading block. Over the course of the evening each president signed the “Protocol for the Adhesion of the Bolivarian Republic of Venezuela to Mercosur” and took their turn at the podium to welcome Venezuela to the trading block and to express their optimism, their hopes, dreams, fears, and the challenges that lie ahead. 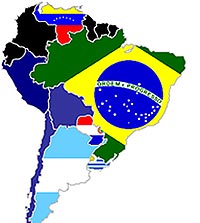 “The incorporation of the Bolivarian Republic of Venezuela into Mercosur is truly an historic event… we are convinced that the integration is the great political enterprise of our time. We are talking about a project that has profound roots in our history, but above all it has a great projection towards the future. It is the strategy that corresponds to our countries in the context of an advanced world, in which, every day more, the problems that our people suffer, cross borders.”

“Productive development, fair trade, the struggle against poverty, against marginalization, for equality and the social citizen, the strengthening of democracy, security and peace, the defense of the human rights are all objectives that you can’t just achieve though the effort of isolated states. It demands, without debilitating the independence of any of the nations, a new concept of sovereignty”

“Through experience we have learned that the simple exclusive logic of the market does not bring us to a horizon with beneficial development for all. We know that it is very important to free up the market with dignity and equality, because the free market does not guarantee our development with inclusion. Integration is much more than liberalizing trade, it is taking on the objective of creating a great political community which promotes production, within the competitiveness that is common to that region, and it converts itself into a strong interlocutor in the discussion on the international stage.”

Brazilian President Luiz Inacio “Lula” da Silva asked to increase the communication between the countries, and announced that they are one step closer to their dreams of integration:

“What we are demonstrating today, with the inclusion of Venezuela into Mercosur, demonstrates that our forefathers were not far off, as Bolivar, his dream lives in our hearts and minds of the people of Latin America. Today, we are one step closer to making that a reality… I think that the signing of the protocol that we signed today is more than a document that guarantees more than just trade between us. It is more than a document that permits our businessmen to do business. The document that we signed today is the is the concretion of a dream of millions of people, millions of Latin Americans who have, over many centuries, died believing that it is possible to achieve integration.” Nicanor Duarte, President of Paraguay, one of the smaller Mercosur countries, expressed his optimism but also his challenge not to repeat the “economic expropriations” of the “first world” within Mercosur:

“I am sure that the presence of Venezuela will revive the commitments that we have and will be a challenge so that there exists more equilibrium, so that we have more cooperation, because if we unite only so that the market interests prevail, if we only see in regional integration the growth of our trade balances, or our own economic thoughts, without the desire of a better well-being for all, in which all of us can participate in the riches which we produce and which we have, I don’t believe that in the end our dreams will materialize.”

“We don’t just need common foreign tariffs, we need a common project, a common sense for history.” Tabaré Vázquez, the president of Uruguay, announced that of course there have been disagreements, but “where aren’t there disagreements?” and that the disagreements are a sign that they are working and consolidating their integration.

“In the processes of integration, the small countries also count. Small in their dimensions, small with their economic level, small perhaps with their riches, but enormous in what they represent in their society, in their people, in their dreams, in their hopes, in their rights and also with their obligations. It’s not easy to carry out a process of integration, also we should, with all of our might, be respecting the sovereignty of each country that makes up this process and attempt to strengthen this process of regional integration. And that’s why we are here and I am enormously happy… to be here tonight renovating the commitments of the Republic of Uruguay in terms of Mercosur which is a strategic priority… and we should work hard not to condemn our people, as Gabriel Garcia Marquez says, to ‘one hundred more years of solitude.’”

In a possible sign of things to come, Bolivian President Evo Morales also attended Wednesday’s event and spoke before the enthusiastic crowd.

“For me this is truly a very historic moment, because never had the people, the indigenous people thought to we could be at this level, participating in an event so important. I remember a couple of years ago I was in this place as a leader, we never thought we would be here, present as President, so that is why it’s such happiness and strengthening for my people and for the historically marginalized and excluded.”

Hugo Chávez spoke last and stressed his belief that the “FTAA and Mercosur are absolutely incompatible.” “500 years of colonialism, we think that’s enough and this event today is, and I say this from the depths of my heart, an answer from the legacy of Bolivar… I believe that we are laying, here, today in Caracas, a fundamental cornerstone for the new freedom of the people of South America. For the people of our America.”

“None of our countries, alone, not even Brazil… could carry out a true integral project of development… Unity is absolutely imperative…”

“It is important to remember that Mercosur was born in the era of neo-liberalism and it was born as a simple treaty of free trade, or with this mission of eliminating tariffs of free trade, but no, if we apply free trade between Brazil and Uruguay (or Paraguay or Venezuela), the small Uruguay will disappear, and they will disappear immediately. We are talking about fair trade, because that is what we are demanding from the developed world. That’s why we don’t want to go to the FTAA [Free Trade Area of the Americas] and that’s why at Mar de Plata, we said that we are burying the FTAA…”

Why it is urgent to break the Bank of the South paralysis?

The Common Market of the South: the long and difficult path to integration