Communities print their own currency to keep cash flowing 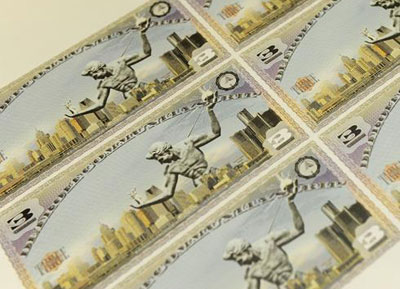 A small but growing number of cash-strapped communities are printing their own money.

Borrowing from a Depression-era idea, they are aiming to help consumers make ends meet and support struggling local businesses.

The systems generally work like this: Businesses and individuals form a network to print currency. Shoppers buy it at a discount — say, 95 cents for $1 value — and spend the full value at stores that accept the currency.

Ed Collom, a University of Southern Maine sociologist who has studied local currencies, says they encourage people to buy locally. Merchants, hurting because customers have cut back on spending, benefit as consumers spend the local cash.

"We wanted to make new options available," says Jackie Smith of South Bend, Ind., who is working to launch a local currency. "It reinforces the message that having more control of the economy in local hands can help you cushion yourself from the blows of the marketplace."

About a dozen communities have local currencies, says Susan Witt, founder of BerkShares in the Berkshires region of western Massachusetts. She expects more to do it.

Under the BerkShares system, a buyer goes to one of 12 banks and pays $95 for $100 worth of BerkShares, which can be spent in 370 local businesses. Since its start in 2006, the system, the largest of its kind in the country, has circulated $2.3 million worth of BerkShares. In Detroit, three business owners are printing $4,500 worth of Detroit Cheers, which they are handing out to customers to spend in one of 12 shops.

During the Depression, local governments, businesses and individuals issued currency, known as scrip, to keep commerce flowing when bank closings led to a cash shortage.

By law, local money may not resemble federal bills or be promoted as legal tender of the United States, says Claudia Dickens of the Bureau of Engraving and Printing.

"We print the real thing," she says.

The IRS gets its share. When someone pays for goods or services with local money, the income to the business is taxable, says Tom Ochsenschlager of the American Institute of Certified Public Accountants. "It’s not a way to avoid income taxes, or we’d all be paying in Detroit dollars," he says.

"We’re a wiped-out small town in America," says Lyle Estill, president of Piedmont Biofuels, which accepts the Plenty. "This will strengthen the local economy. ... The nice thing about the Plenty is that it can’t leave here."