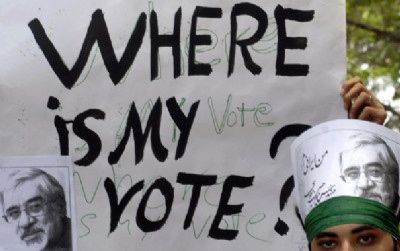 The Voltaire Network articles by James Petras and Thierry Meyssan, denouncing the "green revolution" in Iran as a US-sponsored manipulation to destabilize that country, have swept across the world igniting considerable controversy. Several media rebuked these pundits’ analyses alleging that their inherent "anti-americanism" prevented them from appreciating the great uprising of the Iranian people fighting for their freedom. As for the US, the Department of State denied being aware of any interference of any kind (in the photo: Tehran demonstrators brandishing posters ... in English). On that basis, the Republican opposition sharply criticized the inaction of the Obama Administration.

It now turns out that, in an interview by Farred Zacharia, broadcast by CNN on August 9, 2009, US Secretary of State Hillary Clinton acknowledged what her department had theretofore denied: the United States played a very important role in the pseudo "green revolution" in Iran.

Here is the transcript:

— Fareed Zakaria : So let’s talk about some of those policies. On Iran, there are a number of people, as you know, who argue that the President and you were too slow to condemn what seems to have been fraud in the elections, too slow to offer support to people on the ground because you wanted to preserve the option of negotiating with Iran. Can you really negotiate with Iran at this point?
I understand, in general, one negotiates with all kinds of regimes. But practically speaking, right now, with Ahmadinejad having been inaugurated in a very disputed atmosphere, won’t you be legitimizing him if you negotiate with him?

— Hillary Clinton : Let me start with the first part about our reaction. There was another very important aspect. We did not want to get between the legitimate protests and demonstrations of the Iranian people and the leadership. And we knew that if we stepped in too soon, too hard, the attention might very well shift and the leadership would try to use us to unify the country against the protestors. That was a – it was a hard judgment call, but I think we, in retrospect, handled it pretty well. Now, behind the scenes, we were doing a lot. As you know, the young – one of our young people at the State Department got Twittered, “Keep going,” despite the fact that they had planned for a technical shutdown. So we were doing a lot to really empower the protestors without getting in the way. And we’re continuing to speak out and support the opposition.