The Dalai Lama and Obama: a meeting between two Nobel laureates in deceipt

The time when Obama spoke of a G2 relationship between the United States and China to rule the world is behind us. In just a matter of days, the Obama administration proliferated its provocations against China: arms sales to the separatist region of Taiwan, the announcement by the Director of National Intelligence of an imminent cyberwar against China, compounded by the announcement that the chief of Tibetan separatists will be received by the White House. In this article, Professor Domenico Losurdo takes a new look at the desire of the United States to dismantle China. 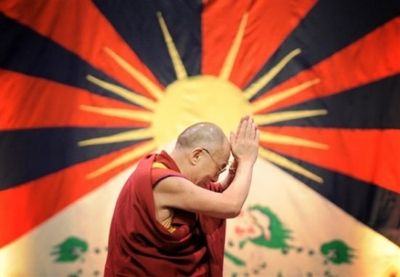 The news is now official. The Dalai Lama will soon be received by president Obama at the White House. The meeting between these two soul mates was inevitale: twenty years apart (1989 and 2009), they both received the Nobel Peace Prize, and both received this distinction ad maiorem Dei gloriam [1], or, to be more precise, for the greatest glory of the “nation elected” by God. 1989 was the year when the USA won the Cold war and were on the point of dismantling the Soviet Union, Yugoslavia and also - they hoped - China. Under such circumstanches, the peace champion crown could have gone to none other than the conniving monk who already for thirty years - encouraged and financed by the CIA - had been fighting to dispossess China of one quarter of its territory (Greater Tibet).

By 2009, the situation had radically changed: the leaders of Beijing had managed to avert the tragedy that others wanted to inflict on their country. Instead of being thrown back to its dark decades of oppression, humiliation and often condemned to mass death by starvation, back to the "China Crucified" that historians have written about, a fifth of the world’s population had experienced an extraordinary surge, whereas the decline and discredit stalking the only remaining super power, which in 1989 still believed it had the world in its hands, were clearly and relentlessly emerging. In the circumstances prevailing in 2009, the Nobel Peace prize came to glorify the person who - thanks to his eloquence and ability to project himself as a man of change coming from the bottom of the social ladder - had been chosen to bring new luster to the United States empire.

In fact, the real significance of the Obama presidency is there for everyone to see. There is not a single region in the world where US militarism and war policies have not intensified. A fleet was sent to the Arab-Persian Gulf, equipped to neutralize a possible Iranian response to the wild bombardments frantically being prepared by Israel, also thanks to the weapons provided by Washington. In Latin America, after having encouraged or promoted the coup d’etat in Honduras, Obama is installing seven military bases in Colombia, re-establishing the presence of the Fourth Fleet, and taking advantage of the humanitarian emergency in Haiti (the severity of which is a consequence of the neocolonial domination that the United States have exerted there for two centuries) to massively occupy the country: with a deployment of troops which also serves as a serious warning to countries in Latin-America. In Africa, under the pretext of fighting “terrorism”, the USA is vigorously reinforcing their military structure: its actual purpose is to obstruct as much as possible the supply of energy and raw materials needed by China, with a view to strangling it at the appropriate moment. In Europe even, Obama has sought the expansion of NATO to the East, and is intent on undermining Russia; any concessions are merely formal and only aim at isolating China to the extent possible, it being the only country which is likely to challenge Washington’s planetary hegemony.

Indeed, it is in Asia that the aggressive character of the new United States presidency emerges in all its starkness. It is not only the fact that the war in Afghanistan has expanded into Pakistan, resorting to drones (and their train of “collateral damage) far more massively than at the time of the Bush junior administration. But it’s developments in Taiwan that are of particular relevance. The situation was clearly improving: the contacts and exchanges between continental China and the island had started again and were developing; relations between the Chinese Communist party and the Kuomindang were restored. With the new weapons sale to Taiwan, Obama intends to achieve a very precise goal: if it is not possible to dismantle this Asian giant, it should at least be prevented from reunifying peacefully.

Right on cue, a seasoned veteran of containment and dismemberment policies vis-à-vis China turns up in Washington. Just at the right moment His Holiness re-enters the scene, having sent his blessing to the gun-runner who is sitting in the White House even before setting foot in the United States. But isn’t the Dalai Lama universally acknowledged as a champion on non-violence? In connection with this refined manipulation, I would like, if I may, refer the reader to a chapter in my new book titled "Non-violence: A demystified history", edited by Laterza (Bari-Rome), which will be available in bookstores as of 4 March 2010. For the moment, I shall limit myself to disclosing only one aspect. Books authored or co-authored by ex-CIA agents reveal a truth which should always be kept in mind: non-violence is a screen invented by US intelligence services who are mostly involved in "phycological war".

Thanks to this "screen", His Holiness has been shrouded in a sacred aura while concurrently being involved, since his escape from China in 1959, in promoting an armed rebellion in Tibet, sustained by massive financial means, a powerful organizing and multi-media machine and a huge arsenal provided by the United States; a rebellion which nevertheless failed for lack of support on the part of the Tibetan population. To this day, former CIA operatives write about it is an armed revolt which enabled the USA to accumulate invaluable experience for their wars in Indochina, in other words for colonial wars - and I add - which rank among the most brutal of the Twentieth Century.

Now, the Dalai Lama and Obama are about to meet. It was in the logic of things. This meeting between the two Nobel Prize laureates of deceipt will be rather amicable as should be expected from a meeting between two personalities which are linked by elective affinities. But it does not hold anything good in store for the cause of peace.

[1] Latin expression and motto of the Society of Jesus: "for the greater glory of God".

History of philosophy professor at Urbino University (Italy). Since 1988, he has directed the Internationale Gesellschaft Hegel-Marx für Dialektisches Denken and is founding member of the Associazione Marx XXIesimo. His last published work in Italian is La non-violenza, Una storia fuori dal mito (Laterza, 2010); in English is Liberalism: A Counter-History (Verso Books, 2011).

Who is Liu Xiabobo?
What the Nobel Prize jury didn’t tell us