Why did Israel attack civilians in the Mediterranean?

Israel weighed in advance the consequences of its attack against a humanitarian convoy of ships carrying aid to the Gaza Strip. What were its objectives in triggering a world diplomatic crisis, and why did it defy its Turkish ally as well as its U.S. protector? 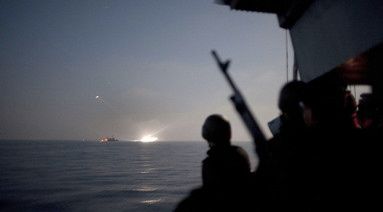 The attack launched by three Israeli Saar missile patrol boats on 31 May 2010 against the "Freedom" flotilla in international Mediterranean waters denotes a headlong rush on the part of Tel Aviv.

The "Freedom" flotilla stems from an initiative by human rights activists [1] [2], supported by the Turkish government. Its aim was to take humanitarian aid to Gaza and, in so doing, to break the blockade illegally enforced by the Israeli army against more than 1.5 million Gazans.

Under international law, the decision to accost a civilian vessel in international waters is an "act of war". Legally speaking, Israel’s acts constitute the appropriation of the vessels and their cargo, the kidnapping of the passengers, murder or possibly even assassination, if one accepts the reports relayed by Turkish television according to which the commandos were in possession of a list of people that had to be eliminated.

This act of war against vessels flying Greek and Turkish flags was carried out to reinforce the blockade, which is itself a violation of international law.

By choosing the argument of "self defense", the Israeli authorities have explicitly claimed sovereignty over international waters up to 69 nautical miles off the coast of Palestine, on the pretext that this annexation - whether temporary or permanent - is essential for the continuation of the blockade, which in turn is necesarry for the security of the State of Israel.

By boarding a Turkish ship and killing passengers, Tel Aviv opted for a military response to the diplomatic crisis that has pitted it against Ankara since January 2009. Israel expects this decision will provoke a crisis within the Turkish Army command as well as between the latter and the Turkish government. However, it could also lead to a complete break in military ties between the two countries, even though Turkey has been Israel’s closest regional ally for over half a century. Turkish-Israeli joint exercises have already been canceled indefinitely. Moreover, this crisis could also affect trade relations between the two countries, despite the fact that Turkey is a vital partner for the Israeli economy.

However, it was imperative for Tel Aviv to undermine Turkey’s credibility at a time when Akara has been moving closer to Syria and Iran with a view to constituting a new tripartite regional authority [3]. As a first step, Israel had to sanction Ankara for its role in the Tehran protocol negotiations on Iran’s nuclear industry.

As for Turkey, which had anticipated a forceful Israeli intervention but not a lethal one, the time is ripe to fill the role of advocate for the Palestinian people, in accordance with the neo-Ottoman doctrine predicated by the Minister of Foreign Affairs, Professor Ahmet Davutoğlu. Without waiting for Prime Minister Recep Erdogan’s return from his current trip to Latin America, the Turkish ambassador in Tel Aviv was recalled to Ankara and a crisis unit was set up around the Deputy Prime Minister, Bülent Arınç. Immediate contact was established with the governments of the 32 countries whose nationals were on the convoy. All Turkish diplomatic staff was mobilized to brief a maximum number of states and international organizations on the situation. During a press conference, Mr. Arınç requested the immediate return of the three Turkish vessels and their stolen cargo, and in particular the release of the hundreds of kidnapped and sequestered Turkish citizens. He chose to describe the attack as an act "piracy" (not war) offering the Netanyahu government the opportunity to portray the events as a "mistake" rather than a policy decision. In keeping with this logic, President Abdullah Gul demanded that the Israeli courts should try those responsible for this massacre.

From Chile, Mr Erdogan stated: "These acts are totally contrary to the principles of international law; they are terrorist acts perpetrated by an inhuman state. I am speaking to those who endorsed this operation: you support bloodshed; we support peace and humanitarian law".

In the afternoon, as a member of NATO, Turkey seized the Atlantic Council. If Ankara fails to receive an appropriate response from the Israeli government, it could decide to qualify the attack as an act of war and seek military aid from member states of the Alliance under Article 5 of the North Atlantic Treaty.

The Netanyahu government has urged its citizens to leave Turkey, while spontaneous demonstrations before Israeli consulates have been multiplying and crowds are calling for revenge.

On 26 May 2010, Israeli Prime Minister Banjamin Netanyahu received White House Chief of Staff Rahm Emanuel in Tel Aviv. The latter handed his host an invitation from Barack Obama that was declined by Israel five days later.

As for the U.S., this case is reminiscent of the USS Liberty (June 8, 1967). During the Six Day War, the Israelis attacked a U.S. Navy electronic surveillance ship, leaving 34 dead and 171 wounded. Tel Aviv presented an apology for the mistake made in a battle situation; while accepting it officially, Washington regarded it as a deliberate breach. At that time, the Israeli intention was to sanction the U.S. for its criticisms of Israel.

This time, the attack on the freedom convoy could represent a retaliation in light of Washington’s vote in favour of a resolution by States signatory of the Nuclear Non-Proliferation Treaty enjoining Israel to declare its nuclear arsenal and to accept inspections by the International Atomic Energy Agency.

The Israeli decision to attack civilian vessels in international waters came after the assassination in the Emirates a Palestinian leader by a Mossad cell, the discovery of a vast network of falsified copies of passports to the embarrassment of Western states; and after Israel’s refusal to attend the international follow-up conference on the Nuclear Non-Proliferation Treaty. This set of facts can either be interpreted as a succession of exploits on the part of a state which is confident of its impunity - in this case, it could amount to just one more exploit or one too many -, or as an escalation following a brief public friction with the U.S. administration - signifying that Israel is asserting itself as the leader of the Zionist movement by showing that Tel Aviv decides and Washington complies.

Travelling in North America, Prime Minister Benjamin Netanyahu decided to end his Canadian visit and cancel his visit to the White House. He had a telephone contact with President Obama who asked for an explanation.

The United Nations High Commissioner for Human Rights, Navi Pillay, stated that the Israeli operation had absolutely no legal justification. The U.N. Special Rapporteur on Human Rights in the Occupied Palestinian Territories, Richard Falk, made it a point to emphasize that beyond the violation of the freedom of movement at sea, the blockade remains the fundamental issue. "Unless prompt and decisive actions are taken to challenge Israel’s attitude vis-à-vis Gaza, we will all be complicit in a criminal policy that threatens the survival of a beleaguered community," he said. The Security Council was urgently convened the same day at 6 p.m.. The Turkish Minister of Foreign Affairs departed for New York [4].

Source : “Why did Israel attack civilians in the Mediterranean?”, by Thierry Meyssan, Voltaire Network, 1 June 2010, www.voltairenet.org/article165593.html

Source : “Why did Israel attack civilians in the Mediterranean?”, by Thierry Meyssan, Voltaire Network, 1 June 2010, www.voltairenet.org/article165593.html