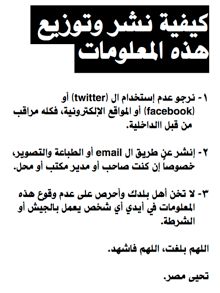 The United States had anticipated a revolution in Egypt for some time, even if they predicted it would occur at the death of their puppet, Hosni Mubarak. Consequently, they were standing ready to step in.

From the first week of demonstrations in Cairo, Washington detached a team from the Albert Einstein Institution. A manual, already used in other countries, was translated into Arabic and disseminated to shepherd demonstrators towards the Facebook and Twitter services set up the the State Department and the CIA.

The manual provides precise instructions regarding the itinerary of the marches. It contains diagrams and aerial views that differ from the aerial representations made by the Egyptians, who rarely use maps in any case. The aerial photos are credited, when in Egypt copyright rights are not respected.

The manual offers tips on how to dress for protection against tear gas, but displays a western model which overlooks local dress traditions.

On one of the illustrations, the character on the right was altered to show a veiled woman, whereas the central character was changed from a military into a policeman. A poster reads: "The police and the people against injustice. Long live Egypt". The message being put across was clearly one of popular unity and fraternity with the police, but the conjunction in Cairo was made with the army. Unwittingly, the revamping of the illustration reveals the haste and heedlessness with which the manual was adapted to Egypt.

Moreover, the manual lays down the objectives that the United States intended to impose on the movement: the toppling of Mubarak and civilian governance. In particular, it aimed to bar any slogans against imperialism or Zionism or those calling for the liberation of Palestine.

In the end, the scheme turned out to be a dismal failure.

Otpor! leader was working for Stratfor

Thomas Schelling and Robert Aumann, the Nobel Prize winners who see war as a game
Scandal