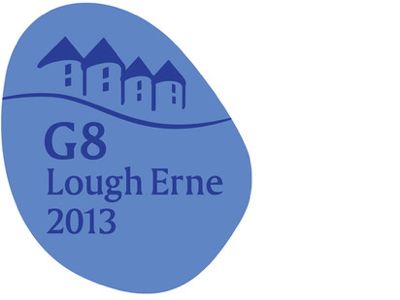 Following their discussion on the global economy this afternoon, G8 leaders at Lough Erne, Northern Ireland, have concluded:

Promoting growth and jobs is our top priority. We agreed to nurture the global recovery by supporting demand, securing our public finances and exploiting all sources of growth. The fight against unemployment, particularly long-term and youth unemployment remains critical in our domestic and collective agendas.

Global economic prospects remain weak, though downside risks have reduced thanks in part to significant policy actions taken in the US, euro area and Japan, and to the resilience of major developing and emerging market economies. Most financial markets have seen marked gains as a result. However, this optimism is yet to be translated fully into broader improvements in economic activity and employment in most advanced economies. In fact, prospects for growth in some regions have weakened since the Camp David summit. While countries have taken steps to avoid the worst of the tail risks that faced the world economy in 2012, vulnerabilities remain in 2013, highlighting the need for countries to press ahead with the necessary reforms to restore sustainable growth and jobs.

Downside risks in the euro area have abated over the past year, but it remains in recession. Additional strengthening of the architecture of the European Economic and Monetary Union, including through the development of the agreed elements of a banking union, is strongly needed to contribute to further reducing financial fragmentation, and continued strengthening of banks’ balance sheets. Fiscal sustainability and restoring financial stability need to go hand in hand with well-designed growth strategies, including growth-oriented structural reforms. The US recovery is continuing and the deficit is declining rapidly in the context of a continuing need for further progress towards balanced medium-term fiscal sustainability and targeted investments to enhance growth. Japan’s growth will be supported by its near-term fiscal stimulus, bold monetary policy and recently announced strategy for promoting private investment. However it will need to address the challenge of defining a credible medium-term fiscal plan. Some of our central banks have continued to use highly accommodative monetary policy to support their domestic economies, including through unconventional means such as quantitative easing. Russia is experiencing low unemployment and a favourable fiscal position, but more moderate global growth and volatile commodity prices will be a challenge.

• In light of this background we are committed to taking further action now to restore confidence, encourage investment and job creation, support the recovery and reduce global imbalances. We agreed today that:

• Decisive action is needed to nurture a sustainable recovery and restore the resilience of the global economy. Advanced economies need to balance supporting domestic demand with reforms to tackle structural weaknesses that weigh on growth, while implementing credible fiscal plans. We reaffirm our commitment to cooperate to achieve a lasting reduction in global imbalances, which surplus and deficit countries must address.

• Monetary policy should continue to support the recovery and be directed towards domestic price stability, according to the respective mandates of central banks.

• Restoring medium-term fiscal sustainability remains a priority. Fiscal policy should allow for near-term flexibility to accommodate economic conditions including through focusing on the structural deficit as appropriate. The pace of fiscal consolidation should be differentiated for our different national economic circumstances.

• Structural reforms are key to improving sustainable growth and long-term living standards, enhancing competitiveness, providing well-functioning credit channels for investment including by small and medium sized enterprises (SMEs) and strengthening confidence. Urgent and specific measures are needed to create quality jobs, particularly for the young and the long-term unemployed. We are all committed to make the necessary reforms in our own economies to support stronger financial systems, healthy labour markets, jobs and growth, and bolster world trade.