Why Not Stop Attacking Russia?

A cursory perusal of what big media says leads one to "understand" that, even if it is no longer Soviet and no longer proclaims the dictatorship of the proletariat, the Russian bear is still almost as wicked and dangerous as at the time of the USSR. Is this a reflection of reality or an image that the media complex is trying to anchor in our minds? In the article we reproduce today, Karl Müller explores the why of this campaign. 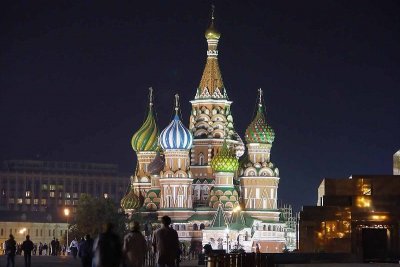 Some argue that the international situation has eased in recent months. We avoided a war between the United States and its allies and Syria. There was also an agreement with Iran. Moreover, the United States, which over the past 20 years led the "West" in a series of wars against international law, would meanwhile have become so weak that they would no longer be able to lead other major wars. In addition, the allies of the United States, beginning with other NATO member states, most of which are also members of the European Union, would not be able to engage in wars without the USA.

It is easy to lose sight of the fact that Washington has moved its aggressive intentions towards the countries of the Pacific and the members of the European Union (under the direction of Germany?) - under cover of the NSA affair - will act as supplements to the United States in the Middle East and Africa.

The numerous reports on the "tense" situation in Asia, currently between China and Japan, play different roles. On the one hand, they can serve as propaganda against China and secondly they will constitute a kind of alarm to "prove" the importance of the U.S. presence in the Pacific to the Europeans but also, and this is their ultimate goal: the preparation of a war against China.

We are not talking, at least publicly, about the policy of the European Union, of Germany notably, vis-à-vis Eastern Europe and Russia. And while NATO states and the European Union have set a goal - from 1990-1991 -, that is to say since the demise of the Warsaw Pact and the Soviet Union, despite their promises to the Soviet government of the day - to "appropriate" the East from the West always incorporating more Eastern European states into the Atlantic alliance as well as the EU to weaken Russia and enslave her gradually. There is evidence of all these maneuvers in the book “The Grand Chessboard. America and the World”, published in 1997 and authored by Zbigniev Brzezinski, personal adviser to various American presidents.

In the 1990s , it seemed that everything was going as planned with Russian President Boris Yeltsin. Russia was gradually sinking into chaos, which spread over all aspects of life in the country, and was on the verge of bankruptcy, politically and economically and socially. In her book “The Shock Doctrine: The rise of disaster capitalism”, published in 2007, Naomi Klein showed in great detail how they sought to submit the Russian economy to control the country, notably to capture its raw materials, through American "advice" and the false theory of the benefits of unfettered capitalism, controlled by US financial interests.

The NATO war against Yugoslavia in 1999 marked a turning point. It became impossible to not perceive that the US conception of "a new world order" had all the traits of imperialism whose goal was to submit the world to the "single world power ."

In 2000, and with the arrival of a new president, the new Russian government tried to change course by loosening the US grip on the economy and wealth of Russia, but also on the society and the country’s politics - a very delicate and difficult project because of the many difficulties that arose.

Compared to the situation in 2000, the progress made by Russia until 2010 is remarkable: the social product has doubled, foreign trade has quadrupled, debts abroad are reduced to one-sixth of their initial value, wages have increased 2.5 times after inflation, annuities tripled, the poverty rate has fallen by more than half, unemployment has gone from 10% to 7%, the number of births increased by 40 %, deaths have decreased by 10%, infant deaths fell by 30%, life expentancy increased by 5 years, the crime rate has decreased by 10%, murders fell by 50% and suicides by 40%, alcohol poisoning fell by more than 60%.

The "West" was not eager to help. On the contrary, the means used to attempt to break Russia became less obvious but even more treacherous. And whoever dared to openly challenge these attempts by promoting countermeasures, as in the case of the Russian government for many years, was very unpopular in the West.

Mainstream Western media have played and still play an increasingly doubtful role in this campaign against Russia. While the policy of the European Union, especially Germany, slides on two parallel tracks because of economic necessity and attempts to combine anti-Russian rhetoric with profitable economic relations, it does not hold true for the unbridled media.

Contrary to what they do in the case of China, a country that is courted because of its economic performance (and the extent of its market), the Western media disclose only and permanently negative information about about Russia. This campaign reached such intensity that the unwary media consumer can only think ill of this country. The negatives cover all areas of life and aim to bring back most of the old prejudices against Russia.

And this despite the continuous action of the Russian government who, for the last 13 years, has consistently proposed cooperation with all countries and for the benefit of all parties.

It is not for the love of the Ukrainian people, but because of a geostrategic purpose, that the European Union has been trying for several years to separate Ukraine away from Russia and to bring it back to the EU itself. We now know that the "orange revolution" in 2004 was in fact an operation of what is now called "Smart Power" in coordination with the European Union and against Russia. This attempted coup was unsuccessful and today the projects of the European Union have not led to the desired result. So, as was to be expected, we now hasten to hide this new failure by claiming that Moscow threatens and blackmails Kiev.

Furthermore, Russian President Vladimir Putin met with Pope Francis in Rome for 35 minutes. Contrary to the affirmation of the main media, the Vatican press felt that the interview was held in a "cordial" atmosphere. The Russian president did not visit the Pope as a religious leader of the Russian Orthodox church, but in his capacity as head of state. It is true that as such he has always emphasized the importance of values ​​in promoting progress in the development of his country, but also in the field of international politics.

Unlike the West, where the emphasis is on a model of utilitarian and materialistic politics, the Russian government seems to rely on a conception oriented on the foundations of the Christian church, that is to say putting man and the world in the center of its actions. Where do we still find this in the West? What Western government still claims this design in favor of the family, religion and the nation for the benefit of people and progress? Who in the West is concerned that without stable relationships with "the other" the development of the personality disintegrates in superficiality and indifference when there is lack of support and loss of identity? Presumably the Pope and the Russian President fully understand each other in the diagnosis of the state of mind of the West and its false theories as well as the way to overcome these errors.

We will not pretend that Russian families are intact, that the people live according to the precepts of religion and the nation offers its citizens all of the necessary support. But insofar as we recognize that we still have a long way to go, we remain benevolent holding out a helping hand, insofar as it is desired. As for those who want to destroy the family, religion and nation, they will do exactly the opposite.

We should however be aware that this is not the way that will bring more peace to the world. On the contrary, the policy of disintegration causes conflicts. Are we willing to pay the price? Is it the will of the people?

We have seen how tempers flared in Germany at a meeting on November 23 in Leipzig, whose theme was "For the future of the family. Will we remove the peoples of Europe?" A group of violent protesters brutally attacked this conference, especially participants who were part of the Russian Parliament. The police that were present allowed this to go on for a long time.

There was a time when we were friendly and respectful of others and differing opinions. What about today?

Less war in the new year?
The Bundeswehr, an "Army in Action"