While NATO member states and the Gulf Cooperation Council (GCC ) persist in presenting Syria as a dictatorship, the country continues its reforms. On June 3, it will elect its President of the Republic, while the war continues to ravage a part of its territory. Damascus is doing everything possible to ensure that this election is democratic and blameless, while its attackers have instructed their media to minimize the coverage and their jihadists to disrupt the procedings. 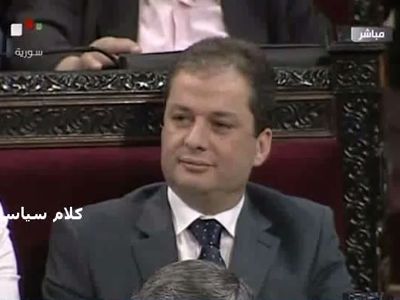 While Bachar el-Assad has not indicated whether he will seek a new mandate, Aleppo’s Communist deputy, Maher Hajjar, has announced his candidacy.

The adoption of a new electoral code by the Council of the Syrian people has provoked the hysteria of NATO and GCC powers.

Even before the vote, Lakhdar Brahimi presented his version of the failure of negotiations in Geneva 2 to the UN General Assembly on March 14. He ended his speech by saying : "I have more serious doubts that the presidential election and a another 7-year term for President Bashar al-Assad will bring an end to the intolerable suffering of the Syrian people, will stop the destruction of the country and restore harmony and mutual trust in the region". [1]

What bee had the Special Representative of Ban Ki-moon and Nabil al-Araby in his bonnet ? On the one hand, he considered the election of Bashar al-Assad a fait accompli though he had not yet made a decision on his possible candidacy, on the other hand how would the Presidential election determine the outcome of the war ?

It is that, for Lakhdar Brahimi, as well as for his agents, the only important thing is to achieve a victory for NATO and the GCC in Syria. This position was explained by the remaining 11 of the 70 States initially making up the "Friends of Syria" assembled on April 3 in London. Their final release is focused on exposing the ballot as a "mockery of democracy" to "continue the dictatorship". [2]

But how would an electoral code modeled on that of the great European nations be a "parody" ?

For the United States, the issue does not even deserve to be discussed. Thus the spokesman of the State Department, Jen Psaki, declared on April 21st that it was enough to look at the history of Hafez el-Assad to infer that his son Bashar was opposed to any free elections. [3] Notwithstanding that Washington did not have any such complaint when the founder of modern Syria supported the liberation of Kuwait, since when does one condemn a man for the behavior attributed to his father ?

The dye is set : The Friends of Syria have instructed their media to minimize coverage of this election, if not to ignore it completely, and their jihadists to disrupt it.

According to the "Friends of Syria", it is impossible to organize credible "elections in the middle of a conflict, only in areas controlled by the regime, with millions of Syrians deprived of their rights, displaced from their homes or in refugee camps". [4] But why therefore welcome the presidential election in Afghanistan (40 % of citizens are refugees abroad ) and recognize in advance the validity of that of the coming election in Ukraine ?

According to member states of the "Friends of Syria", out of 45 million Ukrainians, 2 million live in Crimea "under Russian military occupation"

and another 2 million are in the self-proclaimed "People’s Republic of Donetsk" that is boycotting the elections. Indeed, the only difference between the Ukrainian situation and that of Syria, is that the new authorities in Kiev, from the coup, have been chosen by NATO while those of Damascus were attacked by it.

In reality, the Assad administration has already organized several multiparty elections in 2012 and 2013 : the municipal referendum on the new Constitution and legislative elections. The first two proceeded very satisfactorily, but the third had more problems : firstly because it was difficult to manage displaced populations in the country and secondly because the opposition parties had no experience and often do not understand the need to forge alliances to get elected.

Back to the point of "Friends of Syria" on the impossibility of holding elections with so many refugees. Though there are a lot of Syrians displaced inside the country, it would be interesting to know how many Syrians have fled the war abroad, even if they have all the opportunity to vote in their consulates. The United Nations ensure that out of 22 million citizens, there would be 3.2 million divided into Jordan, Lebanon and Turkey. But these figures are unverifiable and when one goes to Lebanon, one sees that most of the "refugees" are not really refugees : before the war, they were 560 000 Syrian immigrant workers. The law prohibited them from bringing their families without work permits.

Today, they can bypass this law and family reunification happens under the guise of being "refugees." Furthermore, they collect $ 300 per adult per month from the UN and often more from charitable foundations. Since they are proud, they continue to work, under the table, which comes to represent a good standard of living (in Lebanon, $ 300 per month is the salary of a teacher). Not to mention the Syrians who, with the support of their government, cross the border each month to collect their allowances and then come home. There are no accurate statistics allowing one to say who these "refugees" are because the Future Current Movement of Saad Hariri is opposed. As formerly with Palestinian refugees, he relied on an influx of Syrians mainly Sunni, so as to alter the Lebanese demographic balance in favor of their religious community.

In Turkey, the situation is even more caricatural, as Al Qaeda Military camps are classified as "refugee camps" and access by the press is prohibited.

There remain other conditions for eligibility : the constitution [5] and the electoral code state that one must be a Syrian citizen over 40 years of age, not have dual foreign citizenship, have a clear criminal record, if you are married it must be to a Syrian and you must have the support of 35 parliamentarians, you must have resided in the country for at least 10 years and be Muslim.

These last two conditions are problematic : the presence in the country for at least 10 years is clearly intended to prevent exiled applications sponsored by foreign states. De facto, it prohibits the nomination of members of the National Coalition - some of which have never lived in Syria ­ but have been installed in major hotels in Istanbul, Paris and Doha for three years.

The religious condition is the last remnant of a religious regime that survived the Baath party, including the reform of 2012. The President of the Republic is the only one that is subject to discrimination in the Qur’an which specifies that States with Muslim majorities cannot be governed by non Muslim leaders [6] . Aside from its absurdity - the population being predominantly Muslim, it is up to the people, not the Constitution to interpret this principle and to respect it if they wish ­ it is a serious breach of the rights of of non-Muslim citizens. At the time of the Constitutional reform of February 2012, while the armed opposition was exclusively Islamic and NATO and the GCC were paying for defections, President al-Assad did not dare risk a possible conflict with the Muslim clergy on this subject. This project remains open-ended.

Anyway, to submit one¹s candidacy is a strong political act, extremely dangerous in a country attacked by NATO and the GCC. The electoral code therefore spelled out the responsibility of the State to ensure the safety of candidates and the number of officers who will be assigned for their protection.

Finally, the new electoral law guaranteed the means of candidates. Each will have a substantial sum for a campaign and will enjoy equal access to national media. The Minister of Information has given specific instructions to that effect. This will be the first time Syrians can follow the campaigns of each candidate in newspapers, on radio and on television.

Definitely, if the new electoral code is implemented, the presidential election will be democratic, however imperfect since some voters will not be able to participate because of the jihadi occupation of certain territories and that Christians will not be allowed to run. However, members of NATO and the GCC will not recognize this as long as Syria resists them.

[6] It should not be understood by the term Muslim as indicating that leaders must adhere to the religion of Mahomet, but as because they share the same faith in the oneness of God . Thus in the Qur’an the Jewish Abraham is, "the first of the Muslims" (Surah 12 , verse 78).