What Russian TV is saying about Thierry Meyssan’s book

If it is the case that the West characterizes Thierry Meyssan, the French political expert, as a half wit, in many other parts of the world he is celebrated as one of the leading minds on international relations of our times. Russia’s leading TV channel has just dedicated a report on his latest book. This was presented during its main news broadcast. Russian journalists who have already referred to Meyssan’s work on the Pentagon’s strategy, find the evidence for his most recent findings in his latest work.

Following the Arab Spring, the world is going to witness the Latin American Spring, that is, a series of revolutions and coups in Latin America. This is a core premise of a new book by the famous analyst and political scientist Thierry Meysan "Crimes of the Deep State". The deep state is a very influential part of the American elite the members of which used the Middle East for a geopolitical experiment. To destabilize the world. To get economic benefits. This, in fact, is the new format of colonial policy. Robbing weak countries, but in a new way. By the way, Donald Trump is not included in this ignominious group.

Formally, the new policy was launched on September 11, 2001, after the horrific terrorist attack in New York - the destruction of the Twin Towers by airplanes. After this act of terrorism, the so-called "Patriot Act" was adopted, which permits pervasive surveillance of any American citizen.

Meyssan talks about the end of democracy in America. But he goes even further, and claims that the "Patriot Act" was conceived long before September 11. Restriction of freedoms was part of the plan. Another point of the plan is full control over the media by the Capital. And we are witnessing how Western media is being degraded before our own eyes. Already, Soviet newspapers look like beacons of democracy against this bleak and dreary backdrop. 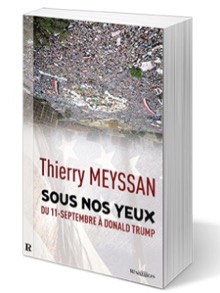 On book shelves of Paris bookstores, a new book by French writer and journalist Thierry Meyssan is absent. It has to be ordered. The author of the book, in his homeland, is being considered to be an unreliable persona since the 16 years ago he allowed himself to publicly question the official version of the terrorist attack in New York on September 11, 2001.

All these years Meyssan was forced to live and work in the Middle East, where he witnessed how step by step the strategy of the new world order, built on the ruins of the twin towers, was implemented.

The Russian edition of Meyssan’s book came out under the heading "Crimes of the Deep State: from September 11 to Donald Trump." Our reader is hardly surprised by the fact that behind the events taking place in the world in the last two decades is a group of people, only a few of whom are official leaders of countries that are somehow involved in these events. The fact is that everything that happens is carried out in fulfillment of someone’s idea, is subject to someone’s logic and iron will, too. And it will not become a revelation for us. 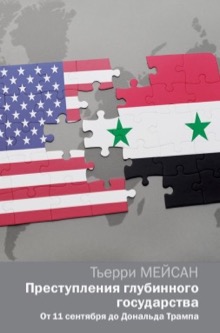 Meyssan’s book is an opportunity to see the real mechanisms that bring modern international relations in motion with all their cynicism, falsity and bloodthirstiness.

"This is the result of my work for the last seven years. It was written in cooperation with various governments. I worked with diplomatic documents, consulted officials, diplomats. This is not a conspiracy theory, but a description of the working methods of some governments during this time. Unfortunately, there is no other explanation for the facts other than this, which I described. I’m not necessarily absolutely right, but I’m close to the truth. Everyone today sees that the world seems to have gone mad, gone wrong, but no one understands how and why, and I explain this, explain the reaction of the players. I am certain of the veracity of these facts, "says the French journalist Thierry Meyssan.

The deep state, like any other, has its own history. In the contemporary American history, the countdown usually begins with the assassination of President Kennedy.

Meyssan, on the other hand, starts counting the new history of the "deep state" from September 11, 2001. In his opinion, on this day, in the United States, a coup d’État took place that brought to power a group of people united by a common idea.

The roots of this idea in the early 90’s can be found in the "Defense Policy Guidance" by Paul Wolfowitz- the concept of global leadership and the suppression of any possible competition.

"Until 2002, they assumed that energy resources were running out. They had to control all sources of resources and, therefore they invaded Iraq. But now they understand that oil and gas will last for the next two or three centuries, maybe even longer. And the policy of the West is changing. At the heart of this are ideas unacceptable to a normal person. The US military is confident of the need for looting and plundering all existing major states and dividing the world into two parts. To achieve this, they began the destruction of the entire Middle East. We saw this happening in Libya, Syria, Iraq, Yemen, Afghanistan, Turkey, Saudi Arabia. And this is not a side effect, this Is the goal. The point is to destroy all major state institutions so that nothing could compete with the United States, " says Thierry Meyssan.

Meyssan draws the reader’s attention to the fact that none of the wars, unleashed with the participation of Washington, has been completed, despite the change of administrations and ruling parties in the United States. And this means that the "deep" United States does not really need to overthrow governments, nor to appropriate resources or control the transit of oil and gas in any particular region. Their goal is the complete destruction of these countries themselves.

"Of course, I do not know exactly who is responsible for this, but I know a few names. For example, Hillary Clinton, General Petraeus, Jeffrey Feltman, the second person of the State Department, but the system itself changes with time. In 2001, it was headed by Vice President Cheney. He does not play a role there anymore. This organization is connected with the governments of Great Britain and Israel. We have documentary evidence, but we still do not know how exactly this is arranged, " continues Thierry Meyssan.

This strategy, which completely refutes the existing concept of modern imperialism, was proposed by Professor Thomas Barnett, a senior researcher at the Department of Strategic Studies at the Center for Naval Studies of the United States. Publicly it was announced in March 2003 just before the attack on Iraq.

According to this strategy, the world should be divided into two parts - a stable zone, which the system favours, and a zone of chaos in which people would not think of any resistance and would be engaged in simply staying alive and transnational companies could freely pump out necessary for them natural and human resources, without being bound by any obligations and not being accountable to anyone. However, even then, the "Pentagon’s New Map" seemed so cruel that it never occurred to anyone that it could serve as a guide for a real-life action.

"In 2004, an insider from British FCO distributed some classified internal documents and, of course, he was immediately imprisoned. So, according to these documents, the United Kingdom was preparing the Arab Spring as early as 2004. Another document is a secret treaty between France and Turkey, explaining the events in Libya and, in part, in Syria. Also there is a UN document with corrections of the German government - the full plan for Syria’s surrender even before the war. One is astounded reading it. It is so cruel - Syria will pay much more in reparations than it was demanded from Japan after the Second World War. At the same time, Japan started the war, and Syria hasn’t, "says Thierry Meyssan.

Almost all of Africa, Central and Latin America, except Brazil and Argentina, fall into the zone of "non-integrable states" doomed to chaos. So naturally does the entire Middle East with Turkey, the Persian Gulf, Iran and Pakistan, all Middle and Southeast Asia and all of The Balkans, except Greece.

All the necessary tools for this purpose have already been created. But there is a problem. The network of international non-governmental structures, the George Soros subversive empire, the conglomerate of world television channels, including CNN, BBC, Sky News, France 24 and of course Al Jazeera, which proved to be so effective in the events in the Middle East, are now mobilized to neutralize Trump.

"Trump is the only public person in the US who said that September 11 is a fraud. Although he is not a professional politician, he understands very well how the US works. He knows what to do to set the system back. He is not an imperialist, he is a Republican, who promised to stop imperialist foreign policy. He is for stopping the activities of international terrorists, for stopping fueling terrorism around the world. In Iraq, Barzani organized a referendum on the separation of the entire territory he had conquered, called Kurdistan. He is now alone, he was forced to resign, and the same thing happened in Catalonia, where Puichemon declared independence and immediately was isolated. And when he decided to seek help from Brussels, NATO- but he was refused. So they keep on yelling that Trump is a weak president with almost all his administration set against him, but it will pass. Everything does. And everything changes", says Meyssan.

Time really changes everything. And what seemed to be a marginal conspiracy theory, may today be a completely sane explanation of what is happening on the planet. Moreover, there are no other explanations but official demagogy, and every day brings something new.

Here is the latest one: Hungarian Prime Minister Viktor Orban called on the world community to pay attention to documents that appeared on the Internet, proving that the Soros Foundation "The Open Society" directly influences the decisions taken by the European Union. 226 members of the European Parliament associated with the billionaire are named. This is more than a third of the whole Europarliament. But even a few days ago, talk about the fact that the billionaire and philanthropist George Soros has been acttively interfering in world politics and has been attempting to control entire countries, would have been considered just a cheap conspiracy theory.

“The US military project for the world”, by Thierry Meyssan, Translation Pete Kimberley, Voltaire Network, 22 August 2017.

“The US Grand Strategy”, by Mikhail Leontyev, Translation Deimantas Steponavicius, 1tv (Russia) , Voltaire Network, 23 September 2017.
On how the Soros Foundation in lobbying the European Parliament, read:

Reliable allies in the European Parliament (2014 - 2019), Kumquat Consult. This report, produced for the Open Society Foundation, presents the 226 of 751 parliamentarians who have agreed to promote some of its positions.