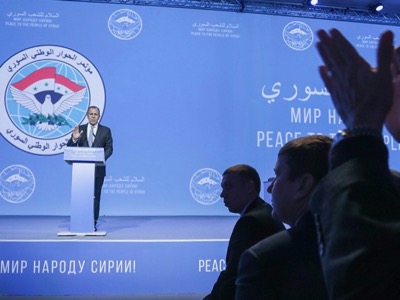 It is my honour to read out a message of greetings to participants in the Syrian National Dialogue Congress from President of Russia Vladimir Putin. Here it is:

“I am happy to welcome the participants, observers and guests of the Syrian National Dialogue Congress to Sochi.

“Your forum is called upon to reunite the people of Syria after a nearly seven-year-long conflict that has claimed hundreds of thousands of lives and forced millions to flee from their homeland. This is a good opportunity to bring to reality the desire of the Syrian people to end this fratricidal war, eradicate terrorism and resume normal life.

“Russia continues its efforts to assist Syrians in the restoration of a lasting peace and stability in Syria and to strengthen its sovereignty, unity and territorial integrity. The Syrian Army, acting with support from the Russian Aerospace Forces, has defeated the ISIS terrorists, who attempted to turn the country into a base area for international terrorism. Thanks to the Astana format launched by Russia, Turkey and Iran, temporary but efficient de-escalation zones have been created to ensure a sustainable ceasefire, to improve the humanitarian situation, to start restoring the ruined social and economic infrastructure and to build up trust among Syrians.

“We can say with confidence that conditions have been created for turning this tragic page in Syria’s history. Considering the nascent positive trends, a truly effective intra-Syrian dialogue must be launched towards achieving a UN-led comprehensive political settlement based on the decisions of the international community, primarily UN Security Council Resolution 2254.

“It is with this aim in mind that Russia has advanced the initiative of this congress, which has been supported by the UN. Working with our partners in the Astana process, influential Arab countries and Syria’s neighbours, we tried to convene a forum that will be as representative as possible based on the belief that the Syrian people alone has the right to determine their future.

“At present, the constructive forces of Syrian society are facing the crucial task of formulating a common view on ways to overcome the crisis and mapping out reforms that will enable all Syrian citizens regardless of their religion, ethnicity or social status to feel safe and at peace in their own country.

I wish you fruitful work and success.

I would like to express my personal sincere gratitude to our colleagues from the Islamic Republic of Iran, Turkey and the UN for their contribution to our collective efforts to prepare this forum. In view of the unprecedented nature of this meeting, which is being attended by representatives of so many ethnic, social and political groups of Syrian society, it is, of course, important to start by building mutual trust and our ability to work together.

I propose that the Special Presidential Envoy for Syria, Ambassador at Large Alexander Lavrentiev, act on behalf of the host country, that is, Russia, and the other guarantor countries – Turkey and Iran – to help us organise the work of this Congress and its panel discussions. If there are no objections, I call for a vote on this proposal.