The Art of War


US nuclear missiles in Italy, as well as their bombs?

As we might have expected, the de facto abandon of the Intermediate-Range Nuclear Forces Treaty (INF Treaty) – concluded between Washington and Moscow at the end of the Cold War – has now rebooted the competition. Except that this time, it’s even more complicated, since the United States violated the Treaty first, while they were already violating the Non-Proliferation Treaty (NPT). Meanwhile, Russia has discreetly forged ahead with its technological progress while pretending to allow the problem to drag on. 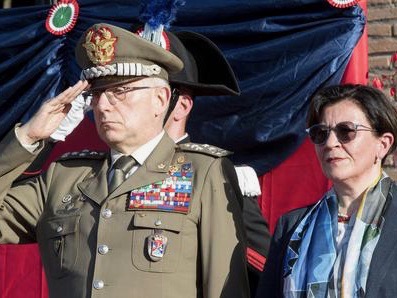 The B61-12, the new US nuclear bomb which replaces the B-61 deployed in Italy and other European countries, will begin production in less than a year. The announcement was made officially by the National Nuclear Security Administration (NNSA). It reveals that the revision of the final project has now been completed with success, and the qualification stage will begin this month at the Pantex Plant in Texas. Production will be authorised to begin in September 2019.

In March 2020, the first unit of production will begin fabricating a series of 500 bombs. As from that time, in other words in about a year and a half, the United States will begin the anti-Russian deployment in Italy, Germany, Belgium, Holland and probably certain other European countries, of the first nuclear bomb in their arsenal with a precision guidance system. The B61-12 is designed with penetrating capacity, built to explode underground in order to destroy bunkers housing command centres.

Since Italy and the other countries, in violation of the Non-Proliferation Treaty, are offering the USA the bases, the pilots and the aircraft for the deployment of the B61-12, Europe will soon be exposed to a greater risk as the front line of the developing nuclear confrontation with Russia.

An even more dangerous situation appears at the same moment - the return of the Euromissiles, meaning the nuclear missiles which are similar to those deployed in Europe in the 1980’s by the USA, with the official aim of defending against Soviet missiles.

This category of ground-based nuclear missiles of intermediate range (between 500 and 5,500 km) were eliminated with the INF Treaty of 1987. But in 2014, the Obama administration accused Russia of having experimented with a cruise missile (# 9M729) whose category was forbidden by the Treaty. Moscow denied that the missile violated the INF Treaty and, in turn, accused Washington of having installed in Poland and Romania launch ramps for interceptor missiles (elements of the « shield »), which could be used to launch cruise missiles bearing nuclear warheads.

The accusation aimed by Washington at Moscow, which is not supported by any evidence, enabled the USA to launch a plan aimed at once again deploying in Europe ground-based intermediate-range nuclear missiles. The Obama administration had already announced in 2015 that « faced with the violation of the INF Treaty by Russia, the United States are considering the deployment of ground-based missiles in Europe ». This plan was confirmed by the Trump administration – in fiscal year 2018, Congress authorised the financing of a « programme of research and development for a cruise missile which could be launched from a mobile road base ».

The plan is supported by the European allies of NATO. The recent North-Atlantic Council, at the level of Europe’s Defence Ministers, which was attended for Italy by Elisabetta Trenta (M5S), declared that the « INF Treaty is in danger because of the actions of Russia », which it accused of deploying « a disturbing missile system which constitutes a serious risk for our security ». Hence the necessity that « NATO must maintain nuclear forces which are stable, trust-worthy and efficient » (which explains why the members of the Alliance rejected en bloc the United Nations Treaty for the prohibition of nuclear weapons).

So the grounds are being laid for a European deployment, on the borders of Russian territory, of ground-based intermediate-range US nuclear missiles. It’s as if Russia were deploying in Mexico nuclear missiles pointed at the United States.