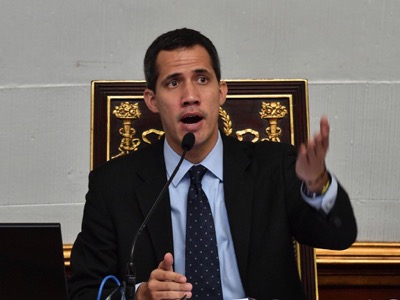 “The people of Venezuela have courageously spoken out against Maduro and his regime and demanded freedom and the rule of law.”
President Donald J. Trump

RECOGNIZING THE LEGITIMATE GOVERNMENT OF VENEZUELA: The United States has officially recognized Juan Guaido as the Interim President of Venezuela.

• President Trump officially recognized the President of the Venezuelan National Assembly, Juan Guaido, as the Interim President of Venezuela on January 23.

o Other governments in the region and across the world have joined the United States in recognizing Guaido as Venezuela’s Interim President.

o Venezuela’s legitimate government, led by Guaido, must be allowed to safeguard its assets for the benefit of the Venezuelan people.

PRESSURING MADURO AND HIS CRONIES: The United States has imposed tough sanctions on Maduro and members of his previous regime.

• The United States will not tolerate those who seek to undermine Venezuela’s democratic institutions and loot Venezuelan resources to enrich themselves at the expense of the people.

• The Trump Administration is blocking assets in the United States owned or controlled by Venezuela’s state-owned oil company.

o This action will further international efforts to disconnect Maduro and his cronies from their revenue sources, while preserving critical assets for the future of Venezuela.

• More than 100 individuals, entities, and aircraft have been designated as blocked property.

• The United States is confident that energy markets will remain well supplied despite reduced imports of Venezuelan oil.

o Over the next year, United States production is forecasted to increase to an all-time high of more than 12 million barrels per day.

STANDING WITH THE VENEZUELAN PEOPLE: President Trump stands with the people of Venezuela as they demand democracy, human rights, and prosperity denied to them by Maduro.

• The United States continues to provide humanitarian assistance to the Venezuelan people.

o Food and medicine have long been – and remain – exempt from our sanctions.

• More than three million people have fled Venezuela since 2015 and the United Nations estimates that number may swell to more than 5.3 million by the end of 2019.

• As of December 2018, there were more than 280 known political prisoners in Venezuela.

• Venezuelans have suffered from violence at the hands of the security services, including extrajudicial killings and arbitrary arrests.