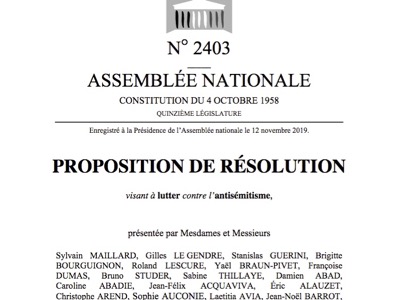 On December 3rd, the National Assembly will debate and vote on a motion for a resolution on combatting anti-Semitism.

This resolution is highly problematic.

We, Jewish academics and intellectuals, from Israel and elsewhere, including many specialists in anti-Semitism and the history of Judaism and the Holocaust, are raising our voices against this motion for a resolution.

The rise of anti-Semitism in the world, including France, is of deep concern to us. We consider anti-Semitism and all other forms of racism and xenophobia to be a real threat that must be tackled with the utmost firmness, and urge the French government and parliament to do so.

While strongly emphasising our concern, we oppose the motion for a resolution on anti-Semitism for two main reasons, and call on the members of the National Assembly not to support it.

Before continuing our argument, we regret that the explanatory statement refers to Israel as "a community of Jewish citizens". About 20% of Israel’s population are Palestinian citizens, most of whom are Muslims or Christians. The chosen designation conceals and denies their existence. We consider this approach to be very problematic, also in view of your country’s commitment to a definition of French citizenship that is not based on ethnicity.

Anti-Zionism is a legitimate viewpoint in Jewish history, and it has a long tradition, including in Israel. Some Jews oppose Zionism for religious reasons, others for political or cultural reasons. Many victims of the Holocaust were anti-Zionists. The draft resolution dishonours them and offends their memory, considering them retroactively as anti-Semitic.

To do so shows great insensitivity and double standards, knowing that Israel is denying Palestine’s right to exist and undermining its very existence.

By confusing these two phenomena, the National Assembly would jeopardize vital efforts to combat true anti-Semitism, which is multidimensional and comes from different sectors of French society.

Our second objection is that the resolution approves the definition of anti-Semitism of the International Holocaust Remembrance Alliance (IHRA). This definition is highly problematic.

The resolution claims that the definition "makes it possible to designate contemporary anti-Semitism as precisely as possible". In reality, however, the definition is unclear and imprecise, and therefore not an effective instrument in the fight against anti-Semitism.

On the other hand, legislation to effectively combat and prosecute anti-Semitism already exists in France.

The explanatory memorandum to the motion for a resolution states that the IHRA definition "does not recognise as anti-Semitic criticism of the policies of the State of Israel". In reality, however, several "contemporary examples of anti-Semitism" have been added to the definition, which intentionally associates criticism and opposition to the policies of the State of Israel with anti-Semitism. These examples are presented and considered as an integral part of the definition.

The same is true when Israel is blamed for its institutionalised racism.

We can certainly disagree with these statements. But these opinions are considered legitimate and protected by freedom of expression in any other political context.

Thus, the resolution creates an unjustifiable double standard in favour of Israel and against the Palestinians.

The IHRA definition is already being used to stigmatize and silence criticism of the State of Israel, including human rights organizations and respected experts. Leading experts in anti-Semitism condemn this situation.

US lawyer Kenneth Stern, one of the original drafters of the IHRA definition, also warned against using the definition to undermine freedom of expression.

The key question is: why is all this happening? We cannot consider this to be independent of the Israeli Government’s main political agenda to entrench its occupation and annexation of Palestine and to silence any criticism of this agenda.

For years, the Israeli government of Prime Minister Benjamin Netanyahu has denounced any opposition to its policy as anti-Semitic. Netanyahu himself strongly defended the assimilation of anti-Zionism to anti-Semitism, as well as the definition of the IHRA.

This illustrates how the fight against anti-Semitism has been instrumentalised to protect the Israeli government.

This motion for a resolution is not a credible and effective way of achieving this. Anti-Semitism must be combated on a universal basis, in the same way as other forms of racism and xenophobia, to combat hatred.

Abandoning this universalist approach will lead to increased polarisation in France, which would also harm the fight against anti-Semitism.

In this context, we note that the motion for a resolution is also in contradiction with the position of the National Consultative Commission on Human Rights (CNCDH). In its 2018 report on the fight against racism, the CNCDH warned that the IHRA definition risks weakening France’s universal approach to the fight against racism and insisted on "vigilance not to confuse racism with legitimate criticism of a State and its policy".

We urge the National Assembly not to support a resolution that wrongly equates anti-Zionism with anti-Semitism.

Do not support a resolution that approves IHRA’s politicised definition of anti-Semitism, especially if it does so without distancing itself from the problematic examples in the definition that concern Israel.