Former President of the National Assembly of Venezuela, Juan Guaidó, persists in acting out his re-election to that post and, consequently, his self-proclamation as Acting President of the Republic.

As for Luís Parra, the new president of the National Assembly, he did not pursue his claim for the interim presidency.

On 7 January 2020, Juan Guaidó, who considers himself elected by his peers during an irregular session held at the El Nacional newspaper, arrived at the Venezuelan parliament to swear in as President of the Bolivarian Republic.

The United States government has renewed its support for Guaidó.

In this photograph - snapped from the podium before the end of the event - journalists can be seen taking photographs in an empty Chamber. 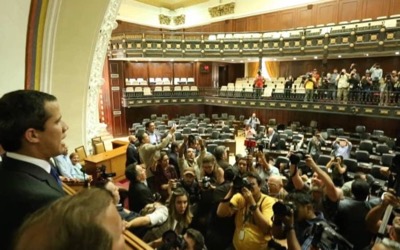