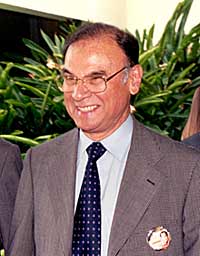 “This inauguration is the result of the political will shown by the governments of both countries”, according to Ambassador Freddy Balzán. The Ambassador was referring to the agreements reached by Argentina and Venezuela last April and July, which covered cooperation in energy and in other areas such as food and industrial products. It also established the creation of Petrosur, the company that will operate as a strategic alliance of the Latin American national oil companies, and which involves an association of Venezuela’s PDVSA with Argentina’s ENARSA.

In this same direction, PDVSA President Rodríguez Araque stated that bilateral agreements “clearly define an objective, which is that of Latin American integration”, pointing out that the establishing of INTERVEN in Argentina was but another step “in the direction of a fraternal search for common interests”, After sharply criticizing the neo-liberal model, “where open competition ends up becoming a monopoly”, Rodríguez Araque explained that “economic integration can be achieved another way, which is through complementation”.

He also dwelt on the present development of his company, mentioning among other facts that it refines a total of 3.3 million barrels of oil per day in Venezuela and abroad, and that it can count on reserves of 78 billion barrels of conventional crude, as well as 235 billion barrels of extra-heavy crudes, adding that “PDVSA is a tool used to power botheconomic and social policies”.

Planning Minister De Vido, for his part, commented on the arrival of the Venezuelan company, saying that what had begun “as simple fuel oil import business, had ended up as a bi-national integration vehicle”. He later added: “We can expect that, in the not far distant future, other countries of the region, such as Paraguay and Uruguay, will join this integration project envisioned by Néstor Kirchner and Hugo Chávez”.

He also stated that INTERVEN “will not only contribute to the Argentine economy as a company, but also as a partner of ENARSA and promoter of the Petrosur project”.

De Vido also announced that next November 12 the Argentine government will undertake a business round table with Bolivian officials to work out the terms of an agreement on natural gas supplies, and that in March 2005 a further stage of the agreements reached by Néstor Kirchner and Hugo Chávez on the Island of Margarita last July are to take place.

Buenos Aires Governor Felipe Solá, for his part, highlighted “the firm decision of the Venezuelan Government to look southwards in terms of integration and fraternal unity”, affirming “that same determination exists in our country”.

He also referred to the cooperation agreement on naval matters signed by Venezuela and Argentina which covers repairs to oil tankers at the Río Santiago shipyard in Ensenada, southern Argentina, and announced that the first Venezuelan ship to be serviced is due to arrive at that installation next November.