Israel blames Russian rocket launchers for its setbacks in Lebanon

Hizbullah has, reportedly, already destroyed at least one armor division out of a total of seven that the IDF relies upon. These losses have jeopardized Israel’s blitzkrieg strategy and have lead the latter to limit its ground campaign to the pace of infantrymen. The Lebanese Resistance uses upscale Russian anti-tank rocket launchers that not only punch holes through Israeli Merkava, but also through US-made tanks. Viktor Litovkin analyses the growing argument between Tel-Aviv and Moscow. 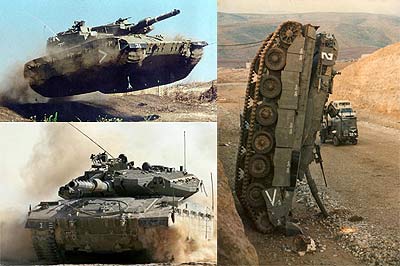 Israeli Public Security Minister Avi Dichter and Defense Minister Amir Peretz said Hezbollah was using modern anti-tank weapons of Russian make, specifically the RPG-29 Vampirs with a tandem warhead. Such statements have perplexed Russian arms experts, but they agreed to talk with me if I did not mention their names.

"As usually happens in war, either side can interpret our words in its favor, and we don’t want that. We are neutral, and do not want to be accused of bias," one of them said.

The main point they made is this: the fact that Hezbollah militants are armed with RPG-29 handheld anti-tank grenade launchers does not mean that they received them from Syria, which acquired them in the course of military-technical cooperation with Moscow. A suspicion is not a fact. Facts must be proved by documented evidence, but there is none.

The fragments of projectiles and the tailpiece, which the Israelis have sent to us, do not provide any evidence of anything. They do indeed bear the letters of the Russian (Cyrillic) alphabet, but this is not enough for a complete examination. We have to look at the serial numbers of the weapons in order to determine where they were made, who sold them, and to whom.

The experts explained that the RPG-29 Vampir with a tandem HEAT (high explosive anti-tank) PG-29V warhead was developed in the late 1980s when tanks acquired reactive armor. The Soviet army received them in 1989. After the disintegration of the Soviet Union and the Warsaw Pact, these grenade launchers and their projectiles could be found in almost all the newly independent ex-communist nations. They were even produced in some of them. Trying to establish whose grenades are hitting Israeli tanks will be pure guesswork.

If a contract on arms supplies is official, or "white", it always mentions the end user. But apart from white contracts there are semi-official, or "grey", exports, and even "black", which are unofficial and illegal.

Anyone from any country could sell RPG-29s to the Middle East, the Palestinians, Hezbollah, Hamas, or any other armed group. Elaborate set-ups could be used to do so. The experts did not name countries or companies, acting according to the innocent-until-proven-guilty principle, but many have already been proven guilty. Trials of illegal arms merchants have long ceased being a sensation. If senior officials have suspicions, or even make public accusations, they should back their statements with documents. Without facts this is idle talk and even political scheming.

The military experts observed that talk of "wrongful use of Russian weapons" starts whenever one of the sides has setbacks at the front lines. This is what the Americans did in Vietnam, and this is what they are doing in Iraq more than twenty years later, when they blame Russia for the fact that the militants are fighting with Russian arms. What other arms could they have if Iraqi leaders were getting them officially from the Soviet Union for almost 30 years? Now Israeli officials have followed suit.

The experts said that in accusing Russia of indirect support for the other side, politicians fail to realize that they admit their helplessness and discredit their own weapons and combat hardware. The Merkava tank has always been considered invincible in Israel. The Israelis were proud of its design and its upgraded reactive armor. They claimed it was the best tank in the world. Tactically, the Israeli army has used it very skillfully in the Gaza Strip and the West Bank. Merkavas entered rural districts only when they were supported by helicopters, and had direct and stable communication with them.

But, apparently, there are not enough helicopters for tank support on Lebanese territory. The crew of any tank can see very little. They do not know what is happening on the sides or in the back. It is an easy target for any militant, who can hide in the bushes or behind a jamb. He does not need to attack a Merkava from the front, where it does indeed have excellent protection. He can hit it from the side, the rear, or the space between the running gear — any tank has many vulnerable spots. Perfect weapons simply do not exist. So why complain about a Russian grenade launcher? The experts thanked the Israeli ministers for the free promotion of Russian weapons, but repeated they had nothing to do with this. They observed that Israeli tanks were hit in Lebanon, not in Israel.

Members of Hezbollah, no matter what emotions they may evoke, are mostly citizens of Lebanon, and have a lawful right to defend their land against the aggressor. At this point the experts said that they were reluctant to go into politics. They switched back to weapons, and added that Israel was not only using its own weapons.

The Merkava is an Israeli tank, but the M-113A1/A2 and M-577A2, on which Israeli soldiers drive into Lebanon, are of American make. The same applies to the following helicopters: the AH-1E/Bell-209, Chechnya-53D Stallion, UH-60 Blackhawk, S-70A, and assault AH-64 Apache. All their artillery — the AMRAAM, AIM-120B, AIM-95, and even the MLRS 227 multiple-launch rocket systems — were also made in the United States, not to mention assault aircraft, bombers, and fighters. The experts asked rhetorically: "Why blame anyone, if you are bombing a foreign country with foreign weapons?"

I did not argue with them. As a journalist, I merely try to familiarize readers with an opinion, which is different from what some Israeli leaders do regarding the "participation" of Russia and its weapons in the bloody conflict in the Middle East.

Retired Colonel after thirty years of service in the Red Army. Former editor of the Izvestia defense column (1999-2002) and Current deputy editor-in-chief of the Indépendant Military Review. He is the author of several books and documentaries.

The missiles that Russia sold to Syria
Unplanned obstacle

Convincing Taxpayers Nice and Easy
An American Lesson In PR