From Mossadegh to Ahmadinejad


The CIA and the Iranian experiment

The news of alleged election fraud has spread through Tehran like wildfire, pitching Ayatollah Rafsanjani’s supporters against those of Ayatollah Khamenei in street confrontations. This chaotic situation is secretly fueled by the CIA which has been spreading confusion by flooding Iranians with contradicting SMS messages. Thierry Meyssan recounts this psychological warfare experiment. 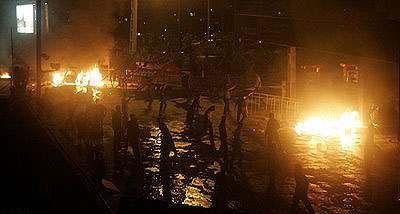 In March 2000, the Secretary of State Madeleine Albright admitted that the Eisenhower administration organized a regime change in 1953 in Iran and that this historical event explained the current hostility of Iranians towards the United States. Last week, during the speech he addressed to Muslims in Cairo, President Obama officially recognized that « in the midst of the cold war the United States played a role in the toppling of a democratically elected Iranian government » [1].

At the time, Iran was controlled by a puppet monarchy headed by the Shah Mohammad Reza Pahlavi. He had been placed on the throne by the British who forced his father, the pro-Nazi Cossack officer Reza Pahlavi to resign. However, the Shah had to deal with a nationalist Prime Minister, Mohammad Mossadegh. Mossadegh, with the help of ayatollah Abou al-Qassem Kachani, nationalized the oil resources [2]. Furious, the British persuaded the United States that the Iranian dissent needed to be stopped before the country became communist. The CIA then put together Operation Ajax to overthrow Mossadegh with the help of the Shah, and to replace him with Nazi general Fazlollah Zahedi who until then was detained by the British. Zahedi is responsible for having instituted the cruelest terror regime of the time, while the Shah would cover his exactions while parading for Western ‘people’ magazines.

Operation Ajax was lead by archeologist Donald Wilber, historian Kermit Roosevelt (grandson of president Theodore Roosevelt) and general Norman Schwartzkopf Sr. (whose son with the same name lead Operation Desert Storm). This operation remains a textbook example of subversion. The CIA came up with a scenario that gave the impression of a popular revolt when in reality it was a covert operation. The highpoint of the show was a demonstration in Tehran with 8 000 actors paid by the Agency to provide credible pictures to Western media [3].

Is History repeating itself? Washington renounced to a military attack on Iran and has dissuaded Israel to take such an initiative. In order to « change the regime », the Obama administration prefers to play the game of covert actions – less dangerous but with a more unpredictable outcome. After the Iranian presidential elections, huge demonstrations in the streets of Tehran are pitching supporters of president Mahmoud Ahmadinejad and supreme leader Ali Khamenei on one side, to supporters of defeated candidate Mir-Hossein Mousavi and former president Akbar Hashemi Rafsanjani on the other. The demonstrations are a sign of a profound division in the Iranian society between a nationalist proletariat and a bourgeoisie upset at being held back from economic globalization [4]. With its covert actions, Washington is trying to weigh on the events to topple the re-elected president.

Once again, Iran is an experimental field for innovative subversive methods. CIA is relying in 2009 on a new weapon: control of cell phones. Since the democratization of mobile phones, Anglo-Saxon secret services have increased their interception capability. While wired phones’ tapping requires the installation of branch circuits – and therefore local agents, tapping of mobile phones can be done remotely using the Echelon network. However, this system cannot intercept Skype mobile phones communications, which explains the success of Skype telephones in conflict areas [5]. The National Security Agency (NSA) therefore lobbied world Internet Service Providers to require their cooperation. Those who accepted have received huge retribution [6].

In countries under their occupation —Iraq, Afghanistan and Pakistan—, the Anglo-Saxons intercept all telephone communication, whether mobile or wired. The goal is not to obtain full transcripts of any given conversation, but to identify « social networks ». In other words, telephones are surveillance bugs which make it possible to know who anyone is in touch with. Firstly, the hope is to identify resistance networks.

Secondly, telephones make it possible to locate identified targets and «neutralize» them. This is why in February 2008, the Afghan rebels ordered various operators to stop their activity daily, from 5PM to 3AM, in order to prevent the Anglo-Saxons to follow their whereabouts. The relay antennas of those that refused to comply where destroyed [7].

On the contrary, with the exception of a telephone exchange which was accidentally hit, Israeli forces made sure not to hit telephone exchanges in Gaza during Operation Cast Lead from December 2008 to January 2009. This is a complete change in strategy. Since the Gulf War, the most prevalent strategy was colonel John A. Warden’s « five circles theory »: the bombing of telephone infrastructures was considered a strategic objective to both confuse populations and to cut communication lines between commanding centers and fighters. Now the opposite applies: telecommunication infrastructures must be protected. During the bombings in Gaza, the operator Jawwal [8] offered additional talk time to its users – officially to help them but de facto serving Israel’s interests. Going one step further, Anglo-Saxons and Israeli secrets services developed psychological warfare methods based on an extensive use of mobile phones. In July 2008, after the exchange of prisoners and remains between Israel and Hezbollah, robots placed tens of thousands of calls to Lebanese mobile phones. A voice speaking in Arabic was warning against participating in any resistance activity and belittled Hezbollah. The Lebanese minister of telecommunications, Jibran Bassil [9], files a complaint to the UN against this blatant violation of the country’s sovereignty [10]. Following the same approach, tens of thousands of Lebanese and Syrians received an automatic phone call in October 2008 to offer them 10 million dollars for any information leading to the location and freeing of Israeli prisoners. People interested in collaborating were invited to call a number in the UK [11].

This method has now been used in Iran to bluff the population, to spread shocking news and to channel the resulting anger.

First, SMS were sent during the night of the counting of the votes, according to which the Guardian Council of the Constitution (equivalent to a constitutional court) had informed Mir-Hossein Mousavi of his victory. After that, the announcing of the official results — the re-election of Mahmoud Ahmadinejad with 64 % of cast votes — seemed like a huge fraud. However, three days earlier, M. Mousavi and his friends were considering a massive victory of M. Ahmadinejad as certain and were trying to explain it by unbalanced campaigns. Indeed the ex president Akbar Hashemi Rafsanjani was detailing his grievances in an open letter. The US polling institutes in Iran were predicting a 20 points lead for M. Ahmadinejad over M. Mousavi  [12]. M. Mousavi victory never seemed possible, even if it is probable that some fraud accentuated the margin between the two candidates.

Secondly, Iranian citizens were selected or volunteered on the Internet to chat on Facebook or to subscribe to Twitter feeds. They received information —true or false— (still via SMS) about the evolution of the political crisis and the ongoing demonstrations. These anonymous news posts were spreading news of gun fights and numerous deaths which to this day have not been confirmed. Because of an unfortunate calendar overlap, Twitter was supposed to suspend its service for a night to allow for some maintenance of its systems. The US State Department intervened to ask them to postpone it [13]. According to the New York Times, these operations contributed to spread defiance in the population [14]. 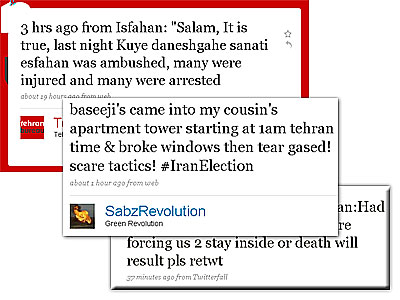 Simultaneously, in a new type of effort, the CIA is mobilizing anti-Iranian militants in the United States and in the United Kingdom to increase the chaos. A Practical Guide to revolution in Iran was distributed to them, which contains a number of recommendations, including:

official Iranian State websites should not be attacked. « Let the US military take care of it » (sic).
When applied, these recommendations make it impossible to authenticate any Twitter messages. It is impossible to know if they are being sent by witnesses of the demonstrations in Tehran or by CIA agents in Langley, and it is impossible to distinguish real from false ones. The goal is to create more and more confusion and to push Iranians to fight amongst themselves.

Army general staffs everywhere in the world are closely following the events in Tehran. They are trying to evaluate the efficiency of this new subversion method in the Iranian experimental field. Evidently, the destabilization process worked. But it is unclear if the CIA will be able to channel demonstrators to do what the Pentagon has renounced to do, and what they do not want to do themselves : to change the regime and put an end to the Islamic revolution.

[9] Jibran Bassil is one of the main leaders of the ‘Courant patriotique libre’, the nationalist party of Michel Aoun.