Study: Militancy on the rise in US 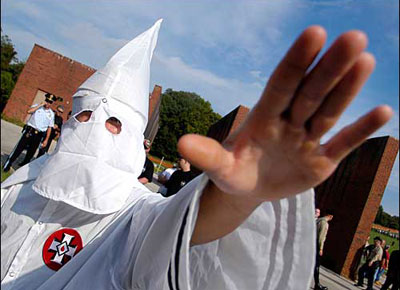 An institutional inquiry into militia growth in the United States points to mounting activities on the part of armed groups amidst economic and state problems.

A new report published by the non-profit US legal firm, Southern Poverty Law Center (SPLC), identifies the ailing economy and a ’moderate’ Democrat president of African descent as the root causes for the increasing dissent which has led to the mushrooming sprout of armed bands and hate crimes across the country.

Researchers within the organization have voiced concern about the ’record high’ campaigns on the sales of guns and ammunitions along with the appearance of new mediums of communication such as the Internet and other means of telecommunication.

The SPLC report adds that militant groups have stepped up their efforts in order to recruit individuals who are on the brink of performing violent acts.

The report draws upon recent projections of the US Homeland Security Department, which signify ominous perils of possible civil gun battles in the event of a clash between anti-government campaigners and federal security forces.

"White supremacists and militias are more violent and thus more likely to conduct mass-casualty attacks on the scale of the 1995 Oklahoma City bombing," department of the Homeland Security said last year.

At least 168 people were killed and around 700 others were injured in an orchestrated bomb attack in Oklahoma City in 1995 after a number of US nationals targeted Murrah federal building in the area.

The Alabama-based rights group has pinpointed the Midwest, Pacific Northwest and the Deep South as the key locations of ’terror’ activists whose efforts might bring about further attacks on state buildings and offices.

The SPLC researchers say they have tracked 50 new armed groups over the past few months alone.

The US President Barack Obama vowed to uproot active hate groups and other armed gangs upon the assumption of power earlier this year.

Over 700 active hate groups exist across the US.