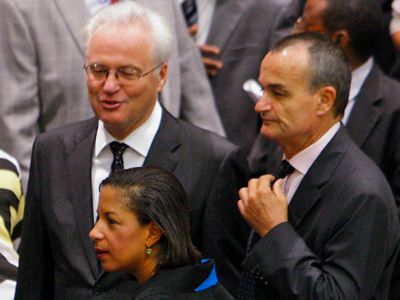 Following is the text of the confidential joint document agreed by France, the United States and Russia on the offer, intended to help fuel a Tehran research reactor (TRR). The letter was handed to the International Atomic Energy Agency on Wednesday, and obtained by Reuters.

Concerns about the Joint Declaration Conveyed by Iran to the IAEA

• The JD asserts a right for Iran to engage in enrichment activities despite the fact that several U.N. Security Council resolutions prohibit Iran from pursuing such activities.

• The JD does not indicate that Iran is willing to meet with the P5+1 countries to address the international community’s concerns about its nuclear program. Although Iran agreed last October to meet again soon with those countries to focus on the nuclear issue — including proposals previously put forward by both sides — Iran has never agreed to hold this meeting. A P5+1 meeting to focus on the nuclear issue is an essential step to address the international community’s concerns regarding Iran’s overall nuclear program, which have been well-documented in numerous UNSC resolutions and IAEA reports.

• Unlike the IAEA’s October proposal, the JD does not set a date certain for removal of the 1,200 kg of 3.5 percent LEU from Iran. The JD states that the LEU would be removed within one month of the conclusion of an implementation agreement. But because there is no timeframe specified for completing that agreement, there is no deadline for removal of the LEU.

• The timeline for the full delivery of the fuel assemblies to Iran is unrealistic. The IAEA’s Project and Supply Agreement called for initial delivery of fuel within about one year to ensure the uninterrupted operation of the TRR, with remaining fuel to be delivered at a later date. The JD calls for all the fuel to be delivered in one year, which we are confident would be impossible to meet.

• The JD indicates that, if Iran decided unilaterally that the provisions of the arrangement were not being respected, Turkey would be obliged, upon the request of Iran, to "return swiftly and unconditionally Iran’s LEU to Iran." Under the previous "escrow" proposal, the return of LEU would be justified if the parties failed to deliver fuel assemblies to Iran as agreed.

• The JD states that Iran’s LEU would be the "property" of Iran while in Turkey. The IAEA proposal stated the IAEA would maintain "custody" of the LEU throughout the process.

• Important technical details of the fuel resupply arrangement are not addressed in the JD. For example, it does not specify what happens to the 1,200 kg of LEU held in escrow in Turkey after the fuel assemblies are delivered to Iran.

• The JD does not account for Iran’s accumulation of LEU since the IAEA first proposed the TRR deal. Removal of 1,200 kg at present would leave Iran substantial stocks, decreasing the confidence-building value of the original proposal. The JD provides no alternative means of ensuring that the confidence-building element of the arrangement would be maintained."