Statement by Jacob Zuma at the 66th UN General Assembly 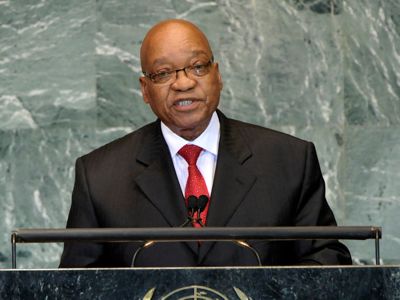 On behalf of the Government and the people of South Africa, 1wish to extend our sincere congratulations to you, Ambassador Nassir Abdulaziz AI-Nasser on your election as President of the General Assembly.

We wish you a successful tenure in the stewardship of this august body and assure you of our delegation’s full support. We congratulate your predecessor, Mr. Joseph Deiss, for the diligent manner in which he guided the work of this Assembly for the 65th session.

1would further Iike to take this opportunity to congratulate Mr. Ban Ki-moon on his reelection as the Secretary-General of the United Nations.

It is also an honour for South Africa to welcome the Republic of South Sudan to the community of nations, as the 193’d member state of the United Nations.

This horrifie incident united the international community and strengthened its resolve and cooperation in fighting against terrorism.

We pay our respects to the victims of the tragedy and their families. We reaffirm our commitment to work with other Member States to eradicate terrorism in ail lts forms and manifestations.

The theme of this session: "The role of Mediation in the settlement of disputes by peaceful means," is timely and weil chosen.

The United Nations Charter mandates the UN to utilize mediation as one of the tools to prevent and resolve conflicts around the globe.

The role of mediation as a tool for the settlement of disputes has renewed relevance today, given the number of conflicts in the world.

We should defend the independence and impartiality of the UN and promote the principles of its Charter during conflicts and crisis. The UN should never take sides in any conflict but should always maintain its impartiality.

The UN must not allow itself to be used by any country regardless of its history or size. Ali citizens of the world should feel confident and secure, in the knowledge that the UN is above ail interests and only serves those of the global citizenry.

We are of the view that regional organizations play a crucial role in the resolution of conflicts and in regional mediation processes.

The UN Charter itself provides for the role of regional organizations in cooperation with the UN.

This role of the regions must always be enforced and enhanced, and not undermined. ln our continent, the AU continues to play a significant role in mediation and the resolution of conflicts, trying at ail times to produce African solutions to African problems, of course with the support of the world.

This year, the world witnessed the so-called Arab Spring in North Africa and the Middle East.

With regard to the situation in Libya, the AU played a crucial role in seeking a peaceful solution to the crisis, in line with its mandate of working for peace and stability in the continent.

However, it is a matter of record now that the AU efforts were never given a chance.

Nonetheless, the AU continues to be seized with the Libyan conflict as it should.

South Africa, through the AU and the United Nations, will work with the National Transitional Council, the representative of the Libyan people, as they proceed to form an inclusive transitional government, which will take the Libyan seat in the African Union.

During this period of working towards normalcy in Libya, we cali for a cessation of hostilities and an end to the NATO aerial bombardment.

We also cali for the lifting of the No Fly Zone, which was necessitated by the need for the protection of civilians.

The proliferation of arms in Libya is major concern. The transitional government will need to be supported in addressing this security issue. It may pose a serious challenge which will affect the entire sub-reqion if it is not attended to.

We also urge the new Libyan authorities to ensure the protection of migrant workers, especially those from sub-Saharan African countries, who number approximately 2.5 million.

Immediate measures should be taken to put an end to the killings, arbitrary arrests and the detention of migrant workers and black Libyans. We will fully support the people of Libya as they go through the transition towards a new, united and democratic Libya which protects human rights, human dignity and freedom.

South Africa continues to support international efforts to assist the people of Palestine and Israel to find lasting peace.

The decades-old struggle by the Palestinian people for a sovereign State of their own has now reached a turning point.

The Palestinian Authority, backed by the League of Arab States, has stated its intention to seek UN membership for the State of Palestine. South Africa fully supports this position.

It is a decisive step towards achieving lasting peace, economie cooperation and prosperity for the millions of people in the Middle East, and urge that it be viewed favourably.

We also support the ongoing struggle for self-determination by the people of the Western Sahara.

We urge the international community to support their quest for freedom, human rights and dignity.

We reiterate our cali for the lifting of the economie and financial embargo against the people of Cuba, to help them gain their economie freedom.

Ali Member States have a dutYto safeguard the future and relevance of the United Nations.

Recent international developments have made more urgent, our efforts to intensify the reform agenda of the United Nations, particularly the Security Council, as weil as the Bretton Woods Institutions.

No reform can be complete without the substantive reform of the Security Council, whose membership must be consistent with the principle of equitable geographical representation.

ln this regard, we reiterate our cali for Africa to be represented in the permanent category of the UN Security Council.

South Africa is preparing to welcome the international community and ail stakeholders to the 17th Conference of the Parties to the United Nations Framework Convention on Climate Change and the seventh meeting of the parties to the Kyoto Protocol, in November and December this year.

The success of conference is highly dependent on the willingness of ail Parties to reach an agreement. It does not depend on South Africa alone.

As leaders we are accountable to the global citizenry, the ordinary people that suffer daily from the impacts of climate change.

They hold high expectations from their leaders to be responsible and to find effective solutions to the threat that climate change presents to their Iivelihood, quality of life, dignity, and in many cases, their very survival. We dare not fail them.

We are witnessing the catastrophic effects of famine in Somalia and neighboring countries. Our response should not be left to the United Nations alone, but requires united action from ail of us.

We have, as South Africa been humbled to contribute in a small way to the alleviation of the human suffering. The people of Somalia still need more support and we urge world attention to be directed more sharply to Somalia a d neighbours in the Horn of Africa.

It is commendable that the Millennium Development Goals and their realization by 2015, continues to feature in the agenda of the UN General Assembly.

It is now four years to go before we reach the target date. It is clear that many of the goals will not be attained on time, in particular in sub-Saharan Africa.

We cali on the international community and the UN to redouble efforts to assist countries that are lagging behind.

ln this session we will be commemorating the 10th Anniversary of the adoption of the Durban Declaration and Programme of Action, the outcome document of the World Conference against Racism, Racial Discrimination, Xenophobia and Related Intolerance that was held in Durban, South Africa in 2001.

Racism and racial discrimination continue to pose a challenge to humanity and negate the principles of the Charter of the UN.

We should continue to work together to eradicate the scourge of racism. Mr President, on the 8th of January 2012, the African National Congress, the oldest Iiberation movement in Africa, will mark one hundred years of existence since its establishment in 1912.

The ANC spearheaded the struggle against racial oppression, colonialism and apartheid in South Africa. It inspired many in the African continent to fight for their freedom and independence from colonialism.

The United Nations declared apartheid a crime against humanity and in that way, endorsed the struggle against racial oppression in our country.

The Centenary of the ANC recognizes the immense contribution of the UN and the international community in working to eradicate racism and racial discrimination in the world.

We will, tomorrow, host a symposium on South Africa’s contribution to the fight against racism and racial discrimination.

Working together let us remain committed to multilateralism and cooperation in this Session of the General Assembly and beyond, and promote the achievement of a more equal and just world.

Remarks by Jacob Zuma to the 64th UN General Assembly