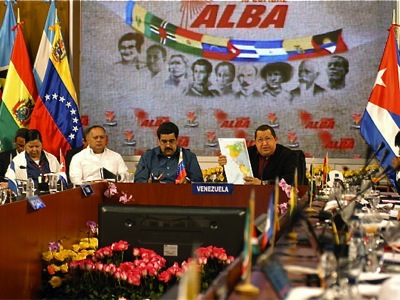 The Heads of State and Government of the Bolivarian Alliance for the Peoples of Our America (ALBA-TCP) ratified their rejection of the systematic intervention and destabilization policy in the sister nation of the Arab Republic of Syria aimed at forcefully imposing a change of regime to the Syrian people.

The ALBA-TCP member countries condemned the acts of armed violence that irregular groups supported by foreign powers have unleashed against the Syrian people, and fervently hope that calm and a peace are restored in the Syrian society.

The ALBA-TCP member countries reasserted their support for the policy of reforms and national dialogue bolstered by President Bashar Al Assad, which are intended to find a peaceful solution to the current crisis, with respect for the Syrian people’s sovereignty and the territorial integrity of that Arab sister nation.

Source : “Resolution of the 11th summit of the ALBA-TCP about the Syrian Arab Republic”, Voltaire Network, 6 February 2012, www.voltairenet.org/article173603.html

Bolivarian Alliance for the Peoples of Our America

Special Declaration by ALBA-TCP Countries on Libya and Syria

Source : “Resolution of the 11th summit of the ALBA-TCP about the Syrian Arab Republic”, Voltaire Network, 6 February 2012, www.voltairenet.org/article173603.html