International Day for the Elimination of Violence against Women


Welcome to the "liberated zone" of Aleppo

Thanks to logistical support from France, the new authorities of the "liberated zone" of Aleppo are currently setting up a religious dictatorship inspired by the Saudi model. The reality is very different from the soothing declarations of Presidents Sarkozy and Hollande concerning the defence of liberty and the promotion of democracy.

Office of the "Committee to Command Good and Prohibit Impious Acts" in Aleppo.

The French government assures us that it is in permanent contact with the representatives of the "liberated zones" in Syria, and that it is supplying them with logistical support. It also declares that it is working to avoid the revolution being hijacked by Islamists.

However, the National Coalition, which had been recognised as the representative for both the exterior and interior opposition, has been recused by the Revolutionary Committee of Aleppo, which has now installed an Islamic government in the "liberated zone" [1]

The French government has not clarified its position. It has given no indication that it has suspended its logistical aid (both humanitarian and "non-lethal" military aid) to the "liberated zone" of Aleppo, even though this is clearly in the hands of the Islamists, who have denounced democracy as a "Western conspiracy". We may remember that France supported the Islamic Emirate of Baba Amr, and that François Hollande received several of its refugee leaders, with honours, in Paris on the 6th July 2012.

It is difficult to gather a clear idea of what is happening in Aleppo, where three areas are now under the control of armed groups. Contrary to what happened in Baba Amr (Homs), whose population fled when an Islamic Emirate was proclaimed, it seems that some of the inhabitants have stayed put and now support the new authorities. The heretics - Sunnis, Sufis and Chiites, including the Druzes, Alaouites and Ismaelites - and the ’infidels’ (Christians) have been expelled and their possessions confiscated.

Government troops don’t dare to attack for fear of causing a bloodbath and more destruction. Little by little, a new life-style is emerging.

But in any event, the "revolutionary" authorities have just created a Committee to Command Good and Prohibit Impious Acts and on the 22nd November, they published their first legislative act, which we here translate in full.

"In the name of God, clement and merciful.
The troubles which are disturbing our Islamic nation should not surprise us. It is facing the dilemnas and trials which surround us on all sides. Each night is darker than the one which came before it. We live in critical times. The moment is difficult. We watch as some of our brothers walk blindly in the shadows. It seems that they are hurrying towards their own misery, falling thoughtlessly to their knees before the West, running towards the vacuum, convinced that the infidels’ way of life is the summit of culture, that their morals are the foundation of development, and their ideas the source of light, without the slightest study or research.
Sharia and the facts show that this point of view is illegitimate and impure. Because of this, fatwas have been delivered by the greatest Sheikhs of our nation – their holinesses Abd al-Aziz ibn Abd Allah ibn Baaz [2], Abdul-Azeez ibn Abdullaah Aal ash-Shaikh [3], Muhammad ibn al Uthaymeen [4], Abdullah Ibn Jibreen [5], Saleh al Fawzan [6], Bakr abu Zayd [7], Abdullah bin Ghailan and many others. For example, how many virtuous women have been dishonoured? And how many young girls, liberated [by Islam] have been offended in their dignity by road accidents? One man bargaining for his own honour, another taking advantage of her weakness, a third manipulating her emotions… especially when he knows that the poor girl is embarrassed by the situation, and does not wish for her husband or her tutor to be informed.
This is why the provisional Military and Civil Councils of Aleppo have explained the situation to the inhabitants of Aleppo, and have decreed that women are now forbidden to drive. Any person who disobeys this order will be punished until they renounce the practice, if necessary, by the use of force. The Committee to Command Good and Prohibit Impious Acts is charged with the application of the present act. 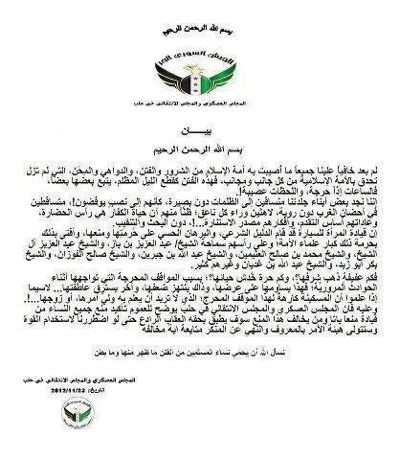 We note that the decision is exclusively motivated by references to the Saudi interpreters of the Quran.

Although in France, the 24th November is the Day for the Elimination of Violence against Women, the French Minister for the Rights of Women, Najat Vallaud-Belkacem, did not deign to comment on this great "revolutionary" advance.

Besides this, the Committee to Command Good and Prohibit Impious Acts has set up a police force tasked with calling the inhabitants of Aleppo to prayer, and punishing those who do not answer.

In the video below, we can see one of these policemen reminding the inhabitants of their duties as good Muslims.

[2] Abd al-Aziz ibn Abd Allah ibn Baaz (1910-1999), ex-Grand Mufti of Saudi Arabia. He is the man who pronounced the fatwa forbidding women to drive in Saudi Arabia. He also authorised the deployment of infidel troops in the Arab Peninsula during Desert Storm. He is also celebrated for having professed that the sun revolves around the earth, and not the opposite. However, he changed his mind when Prince Sultan ben Salman bought himself a place aboard the space shuttle Discovery. While we’re on the subject, I can’t resist the pleasure of reminding you that the Prince Sultan complained that the flight made it impossible to maintain a constant orientation facing Mecca.

[3] Abdul-Azeez ibn Abdullaah Aal ash-Shaikh is the present Grand Mufti of Saudi Arabia. He’s the man who ordered the destruction of the Green Dome - the sepulchre of the prophet Mahommed – as well as all the ancient churches of Arabia, for the motive that these monuments were the object of idolatrous cults.

[4] Muhammad ibn al Uthaymeen (1925-2001) was one of the principal Salafist masters of Saudi Arabia.

[5] Abdullah Ibn Jibreen (1933-2009), a Saudi master. He considered the Chiites to be heretics, and called for their expulsion from the land of Islam.

[6] Saleh al Fawzan is the ex-President of the Supreme Court of Justice of Saudi Arabia.

[7] Bakr abu Zayd is the ex-General Procurator of Saudi Arabia. He died in 2008.