After reading the title, you may think it is describing the phenomenon that Europe has recently been facing: the hundreds of thousands of refugees, both victims of the hardships of civil wars and opportunists, who are invading the Balkans by land and by sea and then making their way further, trying to reach richer countries like Germany, France and Scandinavia by any means possible. 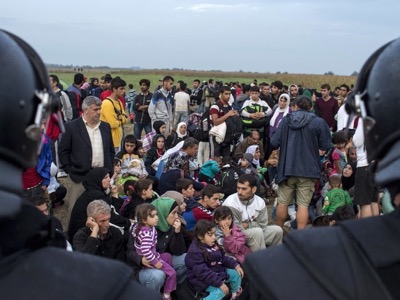 It would seem that this stream of refugees has objective reasons: armed conflicts and wars have been going on in Libya, Syria and Iraq for many years, while the situation is also turbulent in Palestine and Afghanistan. In Tunisia and Egypt, meanwhile, both of which experienced the Arab Spring, the situation also leaves much to be desired. Hardly anybody is taking notice of Bahrain, where opposition protests have been brutally suppressed for years, while in Yemen, air strikes are even being carried out on wedding processions. The location of these two states is not very convenient, however – there is simply nowhere to flee. There is also another important detail: camps are being built for Muslim refugees in Saudi Arabia, but nobody is going there for some reason. As a last resort, they stay in Jordan and Turkey.

Is there also some general reason for their frantic desire to flee so far from their homeland? Wealthy relatives who have already settled in the European Union, perhaps? Or stories about welfare benefits on which they will be able to live comfortably? After all, to make such a journey they have to pay handsomely for the services of smugglers. According to some reports, these smugglers take between $4,000 and $10,000 to transport a single refugee from Syria or Libya to Europe. Even if this person has wealthy relatives abroad, receiving money via bank transfer is impossible in war-torn Syria. Organising transportation on credit clearly involves certain guarantees, especially considering that the boats often sink in the Mediterranean.

Who is providing guarantees that encourage hundreds of thousands of people to rush from other continents to Europe and why?

Researchers have discovered a very interesting fact related to the use of social networking sites [1]. It has come to light that calls on Twitter for refugees to travel to Germany have mostly come from the US. The time spent practising in other countries has not been in vain – from Iran during the 2009 presidential elections to Egypt and Tunisia, where the role played by social networking sites in mobilising the population was considerable.

What we are seeing now is the practical implementation of theoretical calculations of a strategic nature. Such strategies have been under development for a long time. One of them is a study by the Belfer Center for Science and International Affairs at Harvard University that bears the name «Strategic Engineered Migration as a Weapon of War», which the author also uses for the title of this article. The study was first published in 2008 in the Civil Wars journal [2]. Using a combination of statistical data and case study analysis, the author of the work, Kelly Greenhill, provides answers to the following questions: can refugees be a specific type of weapon, can this weapon only be used in wartime or in peacetime as well, and just how successful can its exploitation be? On the whole, Greenhill answers these questions in the affirmative.

In fact, researchers at the Belfer Center, along with researchers from other departments at Harvard University, have been working on designing strategies for conflict management in the context of broader foreign policy issues for many years. The director of the Belfer Center, Graham Allison, was an assistant secretary of defence in the Clinton administration. As well as this, the Center also funds the research of a special task force devoted to Russia.

The US is only pretending to sympathise with Europe, which is being hit hard by the migratory wave. In a recent article by Richard Haass, president of the influential globalist organisation Council on Foreign Relations that deals with European issues, the use of the word «managing” with regard to the migration crisis in the European Union was no accident [3]. Savouring the problems being faced by Europe as a result of the influx of refugees, Haass notes that the US has both an obligation to help the European Union and strategic interests with regard to Germany and Europe as a whole. Despite this «obligation to help”, however, there has been no help at all from the US either in controlling the illegal infiltration of European countries or in terms of the temporary settlement of refugees.

There is also another interesting fact. On 15 September, Barack Obama signed an executive order on the use of behavioural science techniques in public administration. The most recent branch of behaviourism, known as «Nudge”, is nothing more than the latest way to manipulate people. The hand of Cass Sunstein, who previously worked at the Office of Information and Regulatory Affairs in the Obama administration, can clearly be seen here. Along with a British colleague, he co-authored the book Nudge: Improving Decisions about Health, Wealth and Happiness, in which psychological manipulation techniques in the context of everyday life are hidden behind fine words [4]. (Incidentally, Sunstein’s wife is Samantha Power, United States Ambassador to the UN.) There is no doubt that the ‘nudge’ technique will be used far beyond the borders of the US.

The most effective weapon, however, both metaphorically and literally, may be those migrants capable of setting up a small guerrilla group to carry out subversive terrorist acts on the new territory. It is rather interesting that the US is not just playing host to the ones who seem the most ‘promising’ for this, but is also granting them refugee and resident status as well as the official protection of the US government.

As far as one can judge from a recently leaked internal document, a special report to US Congress for the 2014 financial year on the issue of migration prepared by the US Department of Homeland Security states that in 2014, the US Citizenship and Immigration Services applied 1,519 exemptions to individual applicants granted refugee status, resident status, and the official protection of the US government [5]. And the most interesting thing is that in one way or another, all of these people have links with terrorist groups and extensive experience of subversive activities.

The list includes old allies of Washington from among Cuban exiles, Kosovo Liberation Army militants who for some reason cannot live well in their own artificially created state, and many other covert and overt allies of the US. There are members of the Nationalist Republican Alliance from Salvador, most likely those who shot political opponents during the Cold War and are now hiding from justice. There are fighters from the Democratic Movement for the Liberation of Eritrean Kunama – ethno-separatists who are opposed to the Eritrean government. There is the Tigray People’s Liberation Front from Ethiopia and the Oromo Liberation Front from the same country.

Refugee status was given to 49 former Iraqi citizens from the Iraqi Democratic Party, the Kurdish Democratic Party and the Patriotic Union of Kurdistan. The list of «1,519 exemptions” also includes members of other organisations that have devoted many years to armed conflicts.

One can only speculate on the kind of future wars the US has in mind if it is planning to use such specific migrants as a weapon.

[5] Report on the Secretary’s Application of the Discretionary Authority Contained in Section 212(d)(3)(B)(i) of the Immigration and Nationality Act. Annual Report to Congress, Fiscal Year 2014, US Department of Homeland Security. Download.

Member of the International Eurasian Movement