Political repression and militarization of Poland

Poland is living today, and with some delay, a political development comparable to that of Turkey. These two States, members of the Atlantic Alliance, militarized and conduct extensive political repression. Given the involvement of Turkey in the war against Syria and Poland in that against Ukraine, we can logically deduce that these abuses are not national events, but the result of the Nato policy. 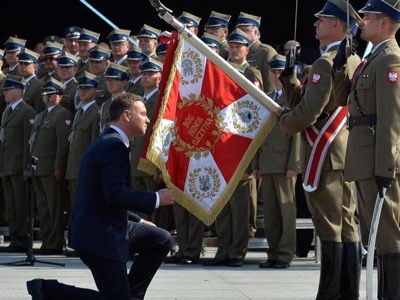 President Andrzej Duda, kneels before a military flag as he takes on the role of commander-in-chief of Polish armed forces.

Although it might seem overstated, the situation described in Niemoller’s poem is beginning to take shape in Poland. A country which was considered for many years as a symbol of the fight against totalitarianism and pioneer of democratic reforms in Central and Eastern Europe is today quickly being transformed into a tyrannical satrapy where civil liberties are curtailed and repression is applied to people with different ideological views than the prevailing political narrative.

On the morning of May 18, 2016, officers of the Polish Internal Security Agency (ABW) searched apartments of members of the national leadership of the Zmiana (Change) Party, demanding that they hand over hard-disks, memory sticks, documents etc. The search took place in three different cities at the same time, and in some cases (as in our Warsaw office) with a serious violation of legal procedures. Besides seizing computers, telephones and hard drives, ABW officers took all our books, leaflets, posters, the sound system we used during a demonstration, banners our party flags and even Polish national flags - to prevent and complicate any political actions and protests in the future. Some members of our party who did not want to participate in the unlawful activities of the Internal Security Agency were intimidated.

This type of action is an obvious form of a political repression against those who hold different visions of Poland’s foreign, domestic and socio-economic policies than those of the Polish neoconservative and pro-NATO authorities.

The leader of Zmiana, Mateusz Piskorski, affiliated organizations and independent groups were acting in conformity with Polish law in spite of harassment from state institutions, such as prolonged registration procedures of the party. The action of the ABW was a significant breach of law and order which is not acceptable in a democratic state that declares respect for the freedom of speech.

Mateusz Piskorski is one of the most important anti-NATO activists in Poland, a political expert and a co-founder of the Polish think-tank, the European Center for Geopolitical Analysis. He was a Member of the Polish Parliament from 2005-2007 and for many years he has spoken out in favor European-continental cooperation and against the NATO and American policy towards Europe and the Middle East.

Mateusz Piskorski was arrested and is being held for 3 months of preliminary custody on charges of "spying for a foreign country," with various media sources hysterically spreading the "unconfirmed reports" that he was employed by the intelligence services of Russia, China "and/or" Iraq. Specific charges are unknown, the whole case is being kept secret, thereby preventing anyone related to Matusz Piskorski from preparing a defense. Instead, the government-controlled media have made a spectacle of hatred and slander, spinning irrational speculation, not only about the detainee but also about so-called “agents of the influence” – a term that de facto covers everyone who proclaims views other than those set down by the Polish authorities.

The wide-scale coordinated action against the Zmiana political party comes on the heels of an increasingly tense political situation in Poland. Several weeks ago, activists from the Communist Party of Poland and the Grunwald Patriotic Workers’ Union (both organizations are fully legal) were sentenced to "restricted liberty," including community service, fines, and travel bans for "promoting totalitarianism." Following these events and just two days before his arrest, Piskorski warned that the Polish government will attempt to "pacify" opposition organizations and individuals in the run-up to the NATO summit to be held in Warsaw on July 8th-9th.

Let us quote this text from Mateusz Piskorski which turned out to be prophetic:

“Predictions concerning the upcoming NATO summit in July in Warsaw are beginning to clearly indicate that today the alliance’s goal is first and foremost preventing the emergence of social movements demanding the liberation of Europe from the tutelage of the United States. As can be seen, The Financial Times’ inadvertent mention of the words of one of the Polish Army’s senior commanders show just what decisions can be expected this summer. These are decisions which completely undermine not only the sovereignty of Warsaw in the field of foreign policy, but also clearly speak to the fact that from this moment on NATO is supposed to be a police force ready to participate in the pacification of eventual social protests or intervene in the affairs of domestic Polish politics.

The actual intentions of the alliance’s latest decisions were revealed honestly and in a frankly military way by Brigadier General Krzysztof Krol, the commander of the Multinational Corps Northeast. The issue under consideration was the concept of the so-called NATO spearhead advocated for years by the Americans and longed for by the Polish politicians of both the former and current government. Let us give the floor to the general: “The VJTF (Very High Readiness Joint Task Force) is to deal with Article 4 situations [of the North-Atlantic Treaty] and that is our intention with it.” Article 4 speaks of cooperation and consultation between member states which cannot be described as in article 5 as experiencing armed aggression against any of them, but rather subjective feelings of para-military threats. What kind of situations are we dealing with here? General Krol leaves no doubt: “The plan was developed to react to hybrid threats in our area of operation. Our plans are scalable to the situation,” he told The Financial Times.

The concept of hybrid war or hybrid actions has blossomed as a definition of the activities of Russia following the Ukrainian revolution of 2014. But what is interesting is that to this day it has not attained any unambiguous academic interpretation and various authors and experts define its scope in different ways. In The Financial Times, however, we read that the NATO spearhead has the right to take action in case of the destabilization of the internal situation in the country triggered by, for example, public protests.

What does this mean in practice? Any internal disturbance could be treated and presented by native as well as American “spearheadologists” as part of the activities vaguely defined as hybrid war. This might lead to a case in which protests against the effects of the TTIP Agreement supported by the Polish state could be treated as “hybrid activities.” Poles’ protests against crimes committed by US Army soldiers stationed in Poland could also turn out to be “hybrid war.”

Antoni Macierewicz’s sick imagination could suggest dozens of different theories. After all, the current Defense Minister is so divorced from common sense that he believes that Radoslaw Sikorski, another pro-American hawk, is actually working for Moscow. Social unrest, protests, strikes, attempts to form information resources independent from the establishment, demanding transparency in the defense and foreign policies of the Polish authorities - all of these could become pretexts for one or another swing into action of advisors from NATO (mainly from the USA), who would provide “fraternal aid” to the Polish units and services subordinated to them.

In this situation, all that is left is to hope that officers and officials will not want to stay in an “oral relationship” (the colorful expression of Sikorski) with their American overlords, will remind themselves of the dignity of the Polish uniform, and send all those representatives of foreign interests “concerned about our security” far back across the Atlantic Ocean.

Meanwhile, we have been left with one thing: to loudly protest and by all law-abiding means block the realization of NATO’s plans which it will announce in July in Warsaw. It is also worth organizing a social movement for Poland’s exit from this pact as a condition of regaining elementary statehood.” 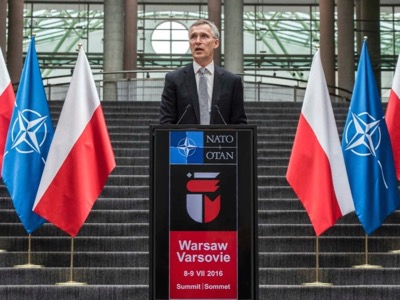 So what is actually going on in Poland, and how could it be connected with the pre-war preparations?

First of all, our biggest concern should be to highlight the fact that in parallel with the political repressions inspired by pro-NATO circles (unprecedented since the fall of the Berlin Wall), there is a huge wave of militarization and Russophobe, pro-war rhetoric.

Polish neo-conservative authorities have not only significantly increased military spending and created new types of troops and paramilitaries, but also begged for the presence in Poland of US troops and military installations. After Antoni Macierewicz (who was previously head of the para-committee ineffectually trying to reject the official version of Smolensk disaster,so that they could blame for the incident on Vladimir Putin) was appointed as a Minister of Defense, not only was decision taken to allow the creation of a US base for ballistic missiles (an element of the so called "anti missile shield"), but also to create 6 US military bases. To calm public opinion in the media they are called "warehouses of military equipment".

The definition of "hybrid war" was extended to the limits, so that any action differing from the line drawn by the official propaganda may be regarded as hostile in not only political but also military terms. Thus the proclamation of ideas contrary to the official propaganda is openly called by government run media as “inspired by foreign intelligence services.”

Another important issue is the fact that Poland was one of the few countries in Europe to officially support the aggressive version of TTiP advocated by the US government. This can be read as a direct involvement of the Polish authorities in sabotaging a competitive project - the New Silk Road - run by China.

As if all this were not enough, Polish President Andrzej Duda a few days ago signed a law which equates the rights of American troops stationed in Poland with the rights of the Polish Army. They can thus move freely around the country without having to consult the government about their current activities. It is worth mentioning that such privileges were not available even to Soviet troops formerly stationed in Poland, who were forced to remain in their bases at all times.

Overall the situation in Poland is tense and in many ways resembles the changes that have occurred in Turkey during the rule of Erdogan. This combination of authoritarianism, militarism and political repression has to be worrisome, because it is a typical mix of measures taken by authorities that are preparing for war. Taking into account the geopolitical conditions of Poland under every possible scenario such a war has to end tragically.