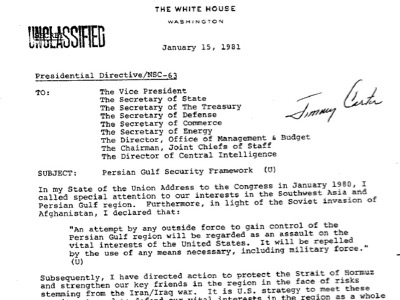 In my State of the Union Address to the Congress in January 1980, I called special attention to our interests in the Southwest Asia and Persian Gulf region. Furthermore, in light of the Soviet invasion of Afghanistan, I declared that:

“An attempt by any outside force to gain control of the Persian Gulf region will be regarded as an assault on the vital interests of the United States. It will be repelled by the use of any means necessary, including military force.” (U)

Subsequently, I have directed action to protect the Strait of Hormuz and strengthen our key friends in the region in the face of risks stemming from the Iran/Iraq war. It is U.S. strategy to meet these commitments and to defend our vital interests in the region as a whole by:

building up our own capabilities to project force into the region while maintaining a credible presence there;

developing a broad range of military and related response options in and outside the region against the Soviet Union, including U.S. force projection into the region, to compensate for the current Soviet regional advantage in conventional forces;

making the Soviet Union aware that it will also face a wide range of economic and diplomatic sanctions on a worldwide basis if it intervenes in the region;

assisting countries in the region: to deter and diminish internal and external threats to stability; and to contribute to deterring and resisting Soviet penetration—political, economic, or military;

diminishing radical influences in the region and enhancing US security by working for progress toward a comprehensive Arab-Israeli peace settlement;

improving access to facilities in the region while remaining sensitive to the special historical experience of the region and not placing in jeopardy our relationships or the internal stability of the countries concerned by insisting on formal basing arrangements;

taking a regional approach to securing our economic and political interests rather than basing their defense wholly on drawing a line to protect specific countries in the region. (S)

There has been considerable progress in improving our security posture in the region and in shaping an effective security framework. To ensure that this trend continues, I direct that the Persian Gulf Security Framework be pursued as follows: (C)

I. The Military Component

A. U.S. Force Capabilities, including forces, lift, facilities access, overbuilding and prepositioning of supplies, exercises, and presence in the region. (S)

C. Getting our Allies to Carry More of the Burden of coalition deterrence/defense in Europe and Northeast Asia, as part of a rational division of labor, to offset greater allocation of U.S. resources to the security of the Persian Gulf. (S)

The Department of State has principal responsibility for this component, which will be carried out in terms of:

A. The Middle East Peace Process in which progress must be achieved as rapidly as feasible. (S)

B. Turkey and Pakistan with which improved security relations are the objective. (S)

C. The Arabian Peninsula in which we will assist the countries concerned to enhance their internal stability and counter Soviet influence. (S)

D. The Horn of Africa, where we seek improved ties with Somalia and Djibouti and, when possible, with Ethiopia. (S)

E. The Allies, in Europe and Asia, from whom we seek diplomatic, military, economic, and political assistance in meeting our mutual security objectives in the Persian Gulf region. An early focus of effort with these Allies and with regional powers will be establishing relationships to help assure quick and positive processing of overflight, refueling and stating clearances required for the U.S. to project and sustain forces in Southwest Asia. (S)

The Department of the Treasury, State, and Energy will share responsibility in this area. Economic subcomponents are:

A. Oil Policy, to ensure availability of oil at reasonable prices and to reduce Western dependence on Gulf oil. (S)

B. Western Economic Assistance, in which our goal will be to help address economic problems in the region through multilateral and unilateral efforts. (S)

C. Saudi and Other Gulf States Cooperation in Financing of Regional Security Needs in which we seek a more comprehensive, region-wide use of Saudi and other peninsular capabilities to meet regional security needs. (S)

D. Economic Stability which is crucial to both the internal and external security and to the political stability of states in the region. It should be an integral component of the security review process and taken into account in any U.S. decisions concerning military and/or economic assistance. (S)

The Director of Central Intelligence has the principal responsibility for developing an effective regionally integrated intelligence program which is fully supportive of the tasks and objectives in the military, diplomatic, and economic components. (S)

Each agency will be responsible for and will identify the programs in its area which are required for implementing this directive. In addition, each agency will propose appropriate priority for these programs. (C)

The Office of Management and Budget will monitor agency programs in support of this directive, will insure that such programs are identifiable, and will insure that they are receiving an appropriately high priority in all agencies. (C)

Interagency coordination for the security framework shall continue to be accomplished by the Special Coordination Committee. (C)

Zbigniew Brzezinski was the National Security Adviser of President Carter and executive director of the Trilateral Commission. He is a member of the Center for Strategic and International Studies. Among his best known works is The Grand Chessboard.

Toward a Global Realignment

Russia must work with, not against, America in Syria

“The real choice in Iraq”