Journal of the change of world order #11


The cost of downgrading

Washington is attempting to hold to its positions without having to start a Third World War, but it looks like an impossible task. Moscow is offering the United States a safe exit in Syria and Yemen. But if they should choose this option, they would be obliged to abandon some of their allies. 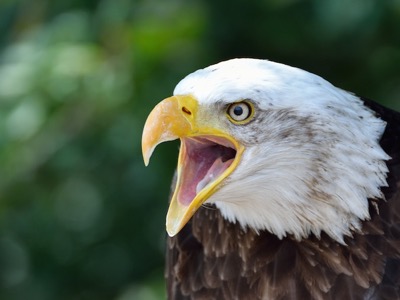 The bald eagle, symbol of the United States.

Since the collapse of the cessation of hostilities agreement during Aïd, a rift has opened between the carefree atmosphere of Western societies and the gravity of Russian and Chinese societies.

In Moscow, the television broadcasts information on anti-atomic shelters and «assault course» team games, while in Washington, everyone laughs at the paranoid Russians who believe that there may be a Third World War.

And yet the two major powers are sending one another signals that would scare anyone. After the US threatened to bomb Syria, Moscow has broken its agreement on the limitation of plutonium stocks, and ajusted its launch system for nuclear weapons by firing three intercontinental missiles. The spokesperson for the Russian army has warned his counterparts, and announced that his armement was capable of destroying all US aircraft, whether they be cruise missiles or stealth fighters. The chief of staff for the US land army proudly replied that in case of a frontal war, the aviation and marines of both armies would quickly be neutralised, and that Washington would win the war on the ground. These bellicose declarations did not particularly impress the Russians, but worried members of Congress to the point that 22 of them wrote to President Obama to ask him to promise not to be the first to start a nuclear war. Moscow gave instructions to its diplomats on post in the NATO countries to repatriate their families and prepare to leave in their turn.

In former times, the Romans assured that «If you want peace, prepare for war». (Si vis pacem, para bellum). The idea was that during a period of international dispute, victory would be won, without war, by the side that seemed capable of winning by the use of military might.

The fact is that the Russian population is preparing for war (for example, this week, 40 million Russians participated in excercises for the evacuation of buildings and fire-fighting), while the Western populations continued to shuffle unconcernedly through their shopping malls.

Of course, we can hope that reason will prevail and that we will avoid a Third World War. In any event, this sabre-rattling attests to the fact that the gamble that has been playing out for the last five years in Syria was not what we thought it was. While at the beginning, the State Department was working to implement its plan for the «Arab Spring» - in other words the overthrow of the region’s secular régimes in order to replace them with the Muslim Brotherhood - Russia and China quickly concluded that the world could no longer be governed by the United States - and that they should no longer be in a position to decide the life or death of the People.

By cutting the historic Silk Road in Syria, and then the new Silk Road in Ukraine, Washington inhibited the development of both China and Russia, forcing them to work together. The unexpected resistance of the Syrian people forced the United States to risk their world domination. The world, which had become unipolar in 1991 with «Desert Storm», is now on the point of returning to its bipolar state, and will perhaps even become multipolar later on.

In 1990-91, the change of world order had been imposed without war (the invasion of Iraq was not the cause, but the consequence), but at the cost of the interior collapse of the Soviet Union. The quality of life for the ex-Soviets diminished drastically – their society was profoundly disorganised, their national wealth was pillaged on the pretext of being privatised, and their life expectancy was reduced by more than 20 years. After having at first believed that this defeat was the fault of Sovietism, we know today that the fall of the USSR was also – perhaps especially – the fruit of economic sabotage by the CIA.

It is therefore not impossible to to attain a new balance of world power without a generalised confrontation. And in order to avoid a World War, the discussion between John Kerry and Sergey Lavrov has progressed from the battle of Aleppo to a general cease-fire for all of Syria and also Yemen. And in fact, we have seen the announcement of an 8-hour truce in Aleppo and a 72-hour truce in Yemen. The problem is that the United States can not retreat to equality with Russia from its uncontested first place – which they took by force and then used so poorly – without paying the price, either alone or with their allies.

Strangely, the five Arab states, Turkey and Iran, who had been invited to Lausanne by Kerry and Lavrov, left apparently satisfied by the meeting. Yet it was their future which was in question. None of them seem to think that heads had to fall, like those of the Warsaw Pact. In the present situation, it is possible to abstain from wiping out part of Humanity, but the importance of the US withdrawal will be measured by the number and importance of the allies they will have to sacrifice.