Establishment of the Provisional Government of Ezidikhan 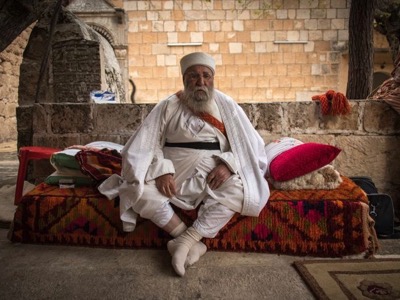 The Land of Ezidikhan is the homeland of the Yezidi people. Here our spiritual, religious and political identity was shaped. The catastrophe that recently befell the Yezidi people – the massacre and abduction of thousands of Yezidis – calls for resolute action for our security and prosperity. Accordingly we take this action to proclaim the inherent power of self-governance in Ezidikhan the Yezidi Nation.

Yezidi survivors of the Daesh holocaust across the Eastern Mediterranean region, as well as Yezidis from other parts of the world, will never cease to assert their right to a life of dignity, freedom and honest toil in their national homeland. This right is the natural right of the Yezidi people to be masters of their own fate, like all other nations.

On behalf of the Yezidi people, we the Supreme Spiritual Leaders do herby affirm in this proclamation the desires of the Yezidis and confederated peoples to freely choose our social, economic, political and economic future without external interference consistent with the internationally recognized principle of self-determination. We further affirm the free right of Yezidis and confederate peoples to govern themselves internally and in relations with other peoples in accord with customary and popularly approved laws and international norms. We believe that these desires correspond with the peoples’ desire for freedom, equality, liberty, security, prosperity and peaceful relations with all peoples. Accordingly, we hereby proclaim and fully affirm the self-governing and autonomous nation of Ezidikhan.

In furtherance of this affirmed reality we do solemnly declare by this proclamation the formal establishment of the Ezidikhan Provisional Government empowered to serve and represent the peoples of the autonomous nation until such time as the peoples of Ezidikhan conduct a nation-wide plebiscite to authorize the formation of a permanent Ezidikhan Regional Government established in accordance with the aforementioned principles and the principles of democratic confederation.

Free and open elections under the principle of one person one vote for all adult Yezidis, with women, men and third sex being eligible to vote and seek office through popular elections as equals; and

Laws and a system of justice based on equality, freedom of assembly, freedom of information and universal human rights.

b) We declare that effective from the instance of 25 July 2017 at 12:00pm until the establishment of the elected, permanent governing authorities in accordance with the Constitution of Ezidikhan which will be adopted by the Governing Council not later than 25 July 2020, the Supreme Leadership Council shall act as a Provisional Governing Council of Ezidikhan, and its executive organ, the Executive Administration, shall be the Provisional Government of Ezidikhan.

The structure of the Ezidikhan Provisional Government shall include, but not be limited to the founding Supreme Leadership Council that shall have juridical power, the Supreme Spiritual Council, a parliament that shall be known as the Governing Council representing each popular Yezidi community, an Executive Administration that shall exercise ministerial powers to implement and enforce customary and popular laws. The Mirs and Baba caste shall hold rights and responsibilities to be decided by popular vote.

The Autonomous Nation of Ezidikhan will:

Actively promote Yezidi immigration and the return of the Yezidi Diaspora;

Foster the economic, social and political prosperity and stability of the country for the benefit of all its inhabitants;

Implement a charter and Constitution protecting individual and community freedom, justice and peace as envisaged in the traditions of Ezidikhan;

Advance and establish customary and judicial laws to ensure equality of social, economic and political rights to all its inhabitants irrespective of religion, creed, ethnic identity or sex or political affiliations;

Affirm that Treaties concluded by the Executive Administration and approved by the Governing Council shall be the law of the land;

Safeguard any nation that wishes to come under the protection of Ezidikhan in a manner consistent with an agreed bi-lateral treaty;

Safeguard the Holy Places and sacred objects of all religions; and

Be faithful to the principles of the Charter of the United Nations and international law.

We extend our hand to all bordering nations and states and their peoples in an offer of peace and good neighborliness, and appeal to them to establish bonds of cooperation and mutual help with the sovereign Yezidi Nation. The Autonomous Nation of Ezidikhan is prepared to do its share in a common effort to achieve freedom and stability for the advancement of the entire Middle East.

We appeal to the Yezidi people throughout the world to rally round the Yezidis of Ezidikhan in the tasks of immigration and economic and prosperity by and between nations and peoples throughout the Eastern Mediterranean region.

We appeal to the Yezidi people throughout the world to join the Yezidis of Ezidikhan in the tasks of restoring our nation and to stand by all Yezidis in the great struggle for the realization of a renewed future rooted in the age-old dream of Ezidikhan.

Placing our trust in the Almighty, we affix our signatures to this proclamation at this session of the provisional National Council, on the soil of the Homeland, in the Sacred Village of Lalish, on this third day of Gelawej of the year 6767 by the Yezidi calendar (the twenty fifth of July of the year 2017 by the Gregorian calendar).

Speech of Pope Francis in the World Meeting of Popular Movements