The US Bipartisan rearmament against Russia

The United States reliving the same situation it found itself in 1995: the White House is trying to reduce military expenditure while Congress is trying to increase it. Once, Bill Clinton was a man of peace and the warmongers were the Republicans and some Democrats. Today, the tables have turned. Donald Trump is now the man of peace and those stirring up war are the Democrats with some Republicans. 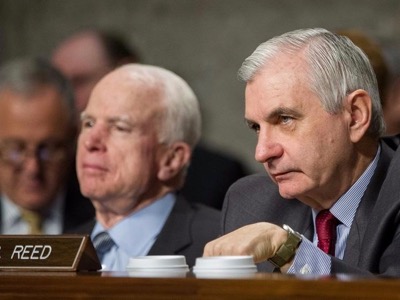 Every day the Democrats attack the Republican Trump for his war-mongering statements. Yet they have got together with the Republicans in the Senate and voted to increase the Pentagon’s budget to 700 billion dollars in 2018. This is 60 billion more than what Trump had actually requested. If you add the 186 billion per year for veterans and other heads, the US’s total military expenditure jumps to around 1,000 billion. This is a quarter of the federal budget.

The unanimous vote of the Senate Armed Services Committee (“the Committee”) formed of 14 Republican Senators and 13 Democrats is decisive. The Committee emphasises that “the United States must strengthen its deterrence against Russian aggression. Russia continues to occupy Crimea, destabilize Ukraine, threaten our NATO allies, violate the 1987 Intermediate-Range Nuclear Forces (INF) Treaty, and bolster the Assad regime in Syria.”

Furthermore, the Committee accuses Russia of leading “an unparalleled attack on our core interests and values”, in particular through “an active, purposeful campaign to undermine the integrity of American democracy.”

A true and proper declaration of war, by which the bipartisan alliance motivates empowering the entire war machine. These are some of the heads of expenditure in fiscal year 2018 (which started on 1 October 2017):
• 10.6 billion dollars to purchase 94 F-35 bomber fighters; 24 more F-35s than the Trump Administration requested;
• 17 billion for an “anti-missile shield” and military activities in space; 1.5 billion more than the figure requested by the Administration;
• 25 billion to build another 13 war ships - 5 billion more than what the Administration requested.

The Budget for 2018 is 700 billion. 640 billion is principally to buy new arms and to maintain military personnel (now 141 billion per annum following an increase in their pay). The remaining 60 billion then goes towards military operations in Syria, Iraq, Afghanistan and elsewhere. Furthermore, 1.8 billion is allocated to training and fitting out armed formations under US command in Syria and Iraq, and 4.9 billion for the “Afghanistan Security Forces Fund”. For the “Initiative for European Reassurance”, that the Obama Administration launched in 2014 following “resurging Russian aggression in Ukraine”, 4.6 billion is allocated in 2018: this serves to grow the presence of US armoured forces and the “strategic advanced positioning” of US arms in Europe. Furthermore, 500 million dollars has been earmarked to provide “lethal assistance” (i.e. arms) to Ukraine.

The increase in the Pentagon’s budget tracks that of other members of the US-led Nato. One of these Nato members is Italy whose military expenditure will have to increase from 70 million euro per day (the current expenditure) to 100 million euro per day. At the same time, the Pentagon’s budget presents what is being prepared for Italy. Among the heads of minor expenses, but not for this reason less important, is 27 million dollars for the Aviano base; more evidence that it continues its empowering in light of the installation of the new B61-12 nuclear bombs, and 65 million for a research and development programme for “a new missile with land base of intermediate range to begin to reduce the capacity threshold triggered by Russian violation of the INF treaty”. In other words, the United States’ agenda includes lining up in Europe nuclear missiles like the Pershing 2 and the Cruise missiles of the eighties. At that time, the latter also stationed in Comiso, Italy.

So this is what the US Senate is announcing, speaking through the unanimous bipartisan vote of its Armed Services Committee.