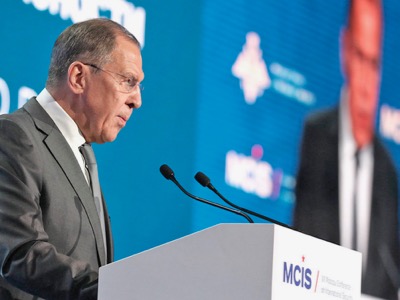 We are so happy to have this opportunity to once again address the Moscow Conference on International Security organised by the Russian Defence Ministry. We would like to welcome all of you taking part in this conference, including the high-ranking representatives from many countries, the heads of international organisations, members of the legislative authorities and civil society, as well as respected scientists and experts.

Over the past years, this conference has become an attractive venue for the professional exchange of opinions on key military and political topics. This open and constructive dialogue offers an opportunity to find mutually acceptable formulas based on a balance of interests of all the parties involved.

My Russian colleagues spoke about this yesterday. They provided a detailed presentation of our positions on the key questions concerning the global and regional agenda. For my part, I would like to share with you our views on the current problems in international affairs, because the global situation continued to deteriorate since our meeting last year, despite our efforts to prevent this.

The main reason for this, and this has become obvious to very many people, is the continued unilateral actions of the US-led Western countries. Many of these actions are openly destructive and can dangerously unbalance the global governance mechanisms.

Washington, London and other Western capitals have not drawn proper conclusions from the tragedies of Yugoslavia, Iraq, Libya, Syria and Ukraine. The latest US National Security Strategy and National Defence Strategy openly look at the world through the prism of military-political rivalry and the friend-foe or with-us-or-against-us logic.

We see increasing disregard for international law and multilateral organisations such as the UN. The US ability to honour its commitments is raising questions, especially in light of the attempts to dismantle major international agreements such as the Joint Comprehensive Plan of Action on Iran’s nuclear program, the UN decisions on the Middle East settlement, the Paris declaration on climate change, as well as basic WTO principles. Taken together, this amounts to attempts to revise the system of international affairs.

Attempts have also been made to revise the Minsk Agreements on a settlement of the internal Ukrainian crisis the implementation of which Kiev is sabotaging. The Kiev government’s patrons in the US and Europe prefer to turn a blind eye to these developments while encouraging Kiev’s party of war, which wants to resolve the problem of Donbass militarily.

Questionable zero sum games, which are actually negative sum games, are being enacted around the world. They continue to flirt with the terrorists and to divide them into bad and not very bad ones, which Russian speakers pointed out at this conference yesterday, providing examples of the situation in Syria and other Middle Eastern countries. The impression is that the Americans are trying to maintain a situation of controlled chaos in this huge geopolitical region, hoping to use it to justify the open-ended US military presence in the region within the framework of their unilateral agenda.

Washington’s policy in the sphere of strategic stability is focused on undermining parity to ensure the US military superiority. Continued efforts are taken to deploy the US BMD system around the world. NATO capability and military activity near the Russian border are growing. We are particularly concerned over the US policy of lowering the nuclear threshold. It has been proposed to deal with the problems in cyberspace in keeping with Article 5 of the North Atlantic Treaty that was signed in Washington. At the same time, our calls for launching a professional discussion on confidence-building measures and on combating threats in cyberspace have not evoked a positive response in Washington or Brussels.

Crude political provocations are staged to fuel confrontation and demonise Russia. The so-called Skripal case has been used as a contrived or orchestrated pretext to expel large groups of Russian diplomats not just from the US and Britain but also from many other states, which were pressured to do so. It has been a long time since we last saw such open mockery of international law, diplomatic ethics and elementary decency. I would like to say that, although we will continue to provide appropriate responses to these unfriendly actions, what we do want is to establish the truth. We demand that a substantive and responsible investigation be held in keeping with the provisions of the Chemical Weapons Convention (CWC). The legitimate questions we have asked on the basis of CWC will have to be answered, as the special session of the OPCW’s Executive Council on April 4, which was initiated by Russia, has shown.

It is unacceptable when unsubstantiated accusations are presented without the provision of hard facts or the results of an honest investigation, as it happened with regard to the Salisbury case and in many other cases, from the US presidential election to the chemical weapons attacks in Syria and the referendum in Catalonia. It is only in the famous book by Lewis Carroll that the Queen could demand, “Sentence first – verdict afterwards.” But Lewis Carroll’s book only looks like a fairy-tale for children while in fact it is a political satire. The discussion held in The Hague yesterday has shown that adult and self-respecting people do not believe in fairy-tales. We again urge our colleagues to deal with any problems within the framework of international law, honestly, and with hard facts. We are ready for this collective work, as President Vladimir Putin has reaffirmed at a news conference in Ankara.

Growing confrontational trends and mutual mistrust are compounding strategic uncertainty, provoking an arms race and, most alarming, contributing to the militarisation of public mentality. Ultimately, they are eroding the post-WWII security architecture that is based on the primacy of the UN Charter.

This is greatly limiting our possibilities for cooperation, which we badly need if we want to effectively react to the common challenges and threats facing humankind, such as international terrorism, organised crime, drug trafficking, WMD proliferation, as well as global climate change.

I hardly need to tell this representative audience about how much the global landscape has changed over the past 25 years or that it continues to change. New centres of economic and financial power and the related political influence are growing ever stronger and pursuing a foreign policy in their own national interests. Nobody can deny them this legitimate right. The developing countries have raised their voice to demand a fair implementation of their desires and aspirations.

It is in our common interests to add a constructive element to the objective but so far chaotic polycentric world order, so that it will facilitate the development of mutually beneficial cooperation and fruitful partnership among the key states. To attain this goal, we must abandon phobias and stereotypes, set aside our differences together with imperial and neo-colonial aspirations that are based on short-term considerations. We must learn to respect each other’s interests and find the strength to work together towards a safe and prosperous future of the humankind. In other words, we must make international relations more democratic. So far, our Western colleagues, who claim to be promoting democracy in all other countries, have avoided signing any multilateral documents that would stipulate stronger democracy in the global system of interstate relations.

In this context, Russia as an independent centre of political power will continue to promote a positive international agenda in the interests of global stability. We are not forcing anything on anyone, we are not claiming national exceptionalism, or, worse still, the right to act as we please. Our relations with our partners are based on international law, the central role of the UN, as well as on respect for the interests, traditions and distinctive character of all nations.

We have no need for confrontation or the arms race. However, Russia will protect its own interests, sovereignty and independence consistently and efficiently, using the instruments at its disposal. President Vladimir Putin spoke about this many times, including in the March 1 Address to the Federal Assembly. The West must at long last accept the fact, that developing a one-sided relationship with us does not pay, that they will not gain unilateral advantages at our expense, and that security in the Euro-Atlantic and Asia Pacific regions and across the rest of the world must be equal and indivisible.

We have been consistently advocating a broad dialogue on the priority questions, including the maintenance of all elements of strategic stability with due regard for the factors affecting it in the current conditions. The presidents of Russia and the US spoke about this during a telephone conversation on March 20. We hope that our leaders’ awareness of the importance of this topic will not be dampened by bureaucratic red tape or fall victim to domestic political intrigues.

Russia stands for working consistently to strengthen arms control and WMD non-proliferation regimes based on the principles of openness and predictability. Russia has completed the destruction of its chemical weapons, implemented its obligations under the New START treaty and is encouraging the US to work together to settle the problem of conversion of part of the US strategic delivery vehicles, as this is stipulated in the treaty. We have submitted to the Geneva Conference on Disarmament our proposals for drafting a convention for the suppression of chemical and biological terrorism, as well as a Russian-Chinese initiative on preventing the placement of weapons in outer space.

Russia will continue to contribute to a political and diplomatic settlement of many conflicts, in particular, in the Middle East and North Africa, as well as the situation with the Korean Peninsula. We will continue to promote the sustainable development of partnership within the Commonwealth of Independent States (CIS) through deeper Eurasian integration and we will help settle problems arising between our neighbours.

As President Putin said in his Address to the Federal Assembly, “let us sit down at the negotiating table and devise together a new and relevant system of international security and sustainable development for human civilisation.” The Shanghai Cooperation Organisation (SCO), the Collective Security Organisation (CSTO) and BRICS are contributing to our common movement towards this goal. The G20, where both the G7 and BRICS countries are represented, has solid potential in this sphere as well. Russia is ready for honest, open and equal cooperation based on and mutual respect with everyone who is sincerely interested in a common peaceful future and prosperity for the humankind.

Sergey Lavrov at the Valdai Club