Valentin Vasilescu, an expert on military affairs, comments on the role of the Israeli and US reconnaissance planes in the incident at Kertch. These facts have been confirmed by the Russian FSB (which the Russian Federation’s Coast-Guards depend on) and which has disclosed videos recorded during the interrogations of the captured Ukrainian marines and a document seized on board one of their ships. 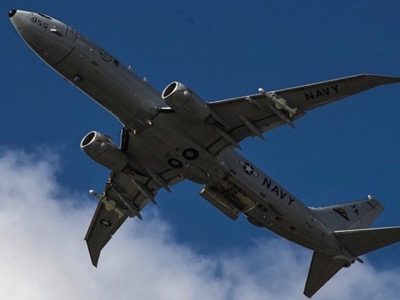 A US spy plane photographed during a reconnaissance near the Strait of Kertch The international media has not presented us with an accurate picture of what went down in the Strait of Kertch. The media has been trying to make us think that it was an act by Russia to limit international maritime traffic. In my opinion, this incident can have serious military consequences for Russia and could lead to the loss of Crimea.

The ground troops do not always have enough information on the enemy and therefore turn to a process known as “reconnaissance” to gather more information. For example, a reconnaissance group, which moves about in very mobile vehicles, engages in combat against the enemy for a few minutes. Then, if it is not captured, the group withdraws ever so quickly.

At the time of the incident that occurred on 25 November 2018 in the Strait of Kertch, two small Ukrainian armed battleships (Berdyansk and Nikopol), class Gyurza-M, executed a reconnaissance mission. Their aim was not to cross the Kertch Strait but to kick off a reaction of the Russian combat set up, tasked with defending a bridge, running above the strait. The two ships were ideally suited for this type of mission. This is because they are the fastest and far easier to manœuvre than the very well armed ships belonging to the Coast Guard and Navy. 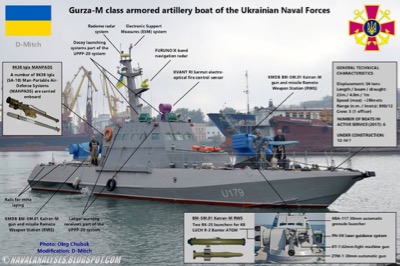 This is the visible part of the incident. There was another aspect, which in contrast, was invisible, and yet far more important than the media made it out to be.

In fact, the information the fruit of “the reconnaissance operation” was not collected by the reconnaissance group that is in contact with the enemy, which in this case is, the small ships (Berdyansk and Nikopol) belonging to the Ukrainian military navy. The information was gathered by another reconnaissance structure which acts in secret. This secretive structure, is specialised in putting in place for surveillance the enemy reaction (that is, the defence set up of the Russian bridge and the Strait of Kertch) thanks to points of land observations, air resources, naval resources, systems for intercepting radio frequency emissions, radar/infrared detection systems, etc. The Ukrainian army has not deployed as complex a reconnaissance set up near the Strait of Kertch, because it does not have the resources to do so. But as we have already demonstrated in a previous article published a little while before the incident, the United States and Israel have become very active in the region.

5 November 2018: a Su-27 Russian plane intercepted a US plane ELINT EP-3E, series 157316, indicator AS17. This Russian plane had taken off from the base of Souda on the island of Crete, flying close to Crimea’s territorial waters. On 19 November, an Israeli reconnaissance plane Gulfstream G-550 Nachshon Aitam (indicator of flight 537) flew over the Black Sea around the Strait of Kertch.

The incident that took place in the Strait of Kertch was closely observed for an entire day by US reconnaissance planes, SIGINT. One of them, type RC-135V, series 64-14841, indicator JONAS 21, based in the Souda Bay, on the island of Crete, flew over the coast looking onto the Black Sea, near Crimea. A second US aircraft, a drone of high altitude, type RQ-4B, series 11-2047, indicator FORTE10, flew to the east of Ukraine near the Azov Sea. This drone, the RQ-4B. is controlled from the US naval base at Sigonella, which is located on the island of Sicily.

On 27 November another reconnaissance plane P-8A, series 168859, executed a reconnaissance flight in the Strait of Kerch and Crimea from the base at Sigonella. 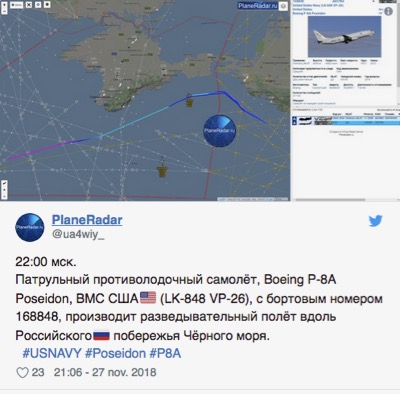 Thanks to these devices, which are fitted in the reconnaissance planes, the incident sparked off by the Ukrainian planes in the Strait of Kertch has enabled the US to have a detailed grasp of the following: – Composition and location of the Russian land and maritime set up destined to protect the strait. – Management structure of the situation and the radio frequencies used – Stages of the procedure for intervention – Responsibilities of the different Russian air, land and naval sub-units, under the Cooperation Plan. – Sectors that are badly defended or vulnerable.

Thus, whilst the small Ukrainian boats and their crews have been arrested by the Russian forces, they have done what they were supposed to do. A mission that could only have come from the United States.

On the same subject :

“Confirmation of our version of the incident at Kertch”, Translation Anoosha Boralessa, Voltaire Network, 30 November 2018.

Source : “Who profits from the incident in the Strait of Kertch?”, by Valentin Vasilescu, Translation Anoosha Boralessa, Voltaire Network, 3 December 2018, www.voltairenet.org/article204195.html

Source : “Who profits from the incident in the Strait of Kertch?”, by Valentin Vasilescu, Translation Anoosha Boralessa, Voltaire Network, 3 December 2018, www.voltairenet.org/article204195.html