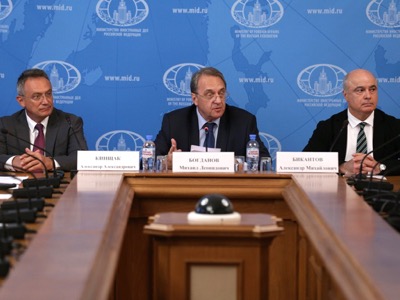 Ensuring security in a strategically important Gulf area is one of the major regional challenges of our time. Military and political shocks, outbursts of terrorist activities of the recent years in this region of the world abounding with hydrocarbon resources, are fraught with disastrous consequences for the system of international relations, global economic and, first and foremost, energy security.

Over decades, tension in the Gulf area has persisted. This negatively impacts security, political and economic stability in the region and in the world. New hotbeds of tension are being added to the existing ones. A major centre of the transnational terrorist network has sprung up near the Gulf area.

Under the current circumstances, active and efficient steps at the international and regional levels are needed to normalize and further improve the situation in the Gulf area, overcome the protracted crisis phase and turn this subregion towards peace, good-neighborliness, and sustainable development.

Russia believes that the idea of establishing a security system in the Gulf area might be essential for consolidating political and diplomatic efforts in this region. It implies a long-term programme of action aimed at normalizing the situation, improving stability and security, resolving conflicts, indentifying key benchmarks and parameters for a future post-crisis architecture, as well as ways to fulfill the related tasks. Our initiative is a follow-up to Russia’s proposals worked out in late 1990s and improved in 2004 and 2007.

Russia’s concept of ensuring security in the Gulf area is based on the following principles:

– Consolidating, in a single counter-terrorism coalition, all stakeholders interested in eliminating the hotbed of extremism and terrorism in the Middle East and ensuring sustainable political settlement in Syria, Yemen, other countries of the region, is a priority. Counter-terrorism activities should be carried out under the UN aegis on the solid basis of international law. This should provide a foundation for the settlement of conflict situations and other disputes. It is exactly this way that the main objectives of eliminating chemical weapons in Syria were achieved.

– There is a need for mobilizing public opinion across Islamic and other countries with a view to jointly countering the threat of terrorism, including through integrated efforts in media space.

– All parties should adhere to international law, to the UN Charter and UN Security Council resolutions in the first place. We all aim for a democratic and prosperous Middle East that would encourage inter-faith peace and coexistence.

– Peace-making operations can only be conducted on the basis of relevant resolutions of the UN Security Council or upon request of the legitimate authorities of the attacked state. Double standards are unacceptable here.

– The security system in the Gulf area should be universal and comprehensive; it should be based on respect for the interests of all regional and other parties involved, in all spheres of security, including its military, economic and energy dimensions. It should take full account of the necessity to provide humanitarian assistance to countries and peoples of the region that are in need, with a view to addressing conflict situations and stabilizing societies.

– Multilateralism is considered to be a mechanism of participation of stakeholders in the joint assessment of the situation, decision-making process and implementation of decisions. Exclusion of any stakeholder for any reason is inadmissible.

– Progress toward the establishment of a security system should be achieved on a step-by-step basis starting with most relevant and urgent problems. This concerns, first and foremost, combat against international terrorism, the settlement of the Iraqi, Yemeni and Syrian crises, and the implementation of all agreements reached on the Iranian nuclear programme.

– This step-by-step approach is also applicable to the adoption by the Gulf states and international community of confidence-building measures and provision of mutual security guarantees in the region.

– Taking into account the close interrelation of regional problems, the establishment of a security system in the Gulf area is considered as part of the solution aimed at ensuring security in the Middle East as a whole. In this context, the principles of respect for sovereignty and territorial integrity, settlement of issues of domestic politics through national dialogue, within the constitutional framework and without external interference, are crucial.

Practical work to launch the security system deployment in the Gulf area can be initiated through bilateral and multilateral consultations among stakeholders, including regional and extra-regional states, the UN Security Council, the League of Arab States, the Organization of the Islamic Conference, and the Cooperation Council for the Arab States of the Gulf. These contacts should lead to the establishment of an action group to prepare an international conference on security and cooperation in the Gulf area. The group is tasked with agreeing on the geographical coverage of the future security system, its range of participants, agenda, representation level, forum venue, as well as with preparing draft decisions, including identification of security, confidence-building, and control measures.

In this context, Russia submits the following considerations concerning the set of security, confidence-building, and control measures as ideas for further discussion and development.

With regard to the situation in the Gulf area, states within the region and extra-regional stakeholders shall:

– reaffirm the whole set of their international legal commitments: in particular, the non-use or threat of force in dispute settlement, respect for sovereignty and territorial integrity of states of the subregion, commitment to the settlement of territorial and border disputes solely through negotiations or by other peaceful means, fulfillment in good faith of their international commitments;

– assume mutual obligations of military transparency (dialogue on military doctrines, defense ministers’ subregional meetings, establishment of hotlines, exchange of preliminary notifications of military exercises and military flights, exchange of observers, renouncement of permanent deployment of troops of extra-regional states in the territories of states of the Gulf, exchange of information concerning arms procurement and armed forces);

– sign agreements on arms control which could include, for example, establishment of demilitarized zones, prohibition of destabilizing accumulation of conventional weapons, including missile defense weapons, balanced reduction of armed forces by all parties;

– given the objectives of strengthening the NPT-based non-proliferation regime in the Middle East, take steps to transform the region into a zone free of weapons of mass destruction;

As more progress in building the security system is achieved, the discussion on downsizing the international military presence in the region and developing common confidence-building measures for regional and other states should be initiated.

The central long-term objective is the creation of a security and cooperation organization in the Persian Gulf (PGSCO) that would include, in addition to the Gulf countries, Russia, China, the USA, the EU, India and other stakeholders as observers or associated members.

Efforts to resolve chronic conflicts, first of all the Israeli-Palestinian conflict, which remains one of the major destabilizing factors in the whole Middle East region enabling extremists to recruit new fighters, should be pursued. In future, in the context of the Arab-Israeli settlement, the PGSCO could become an element of the regional security system for the Middle East and North Africa.

Russia is ready to collaborate with all stakeholders in order to implement these and other constructive proposals with a view to ensuring durable security in the Gulf.

Extremely alarming trends are taking shape in the Persian Gulf, a strategically important region for the entire world. These include the sharp aggravation of disputes between individual countries, their unwillingness to accommodate each other’s interests and concerns and, as a result, a significant increase in conflict potential. It must be acknowledged that there is real threat of further escalation that may lead to large-scale hostilities.

We believe such an outcome to be unacceptable. And so, we see the need for collective efforts to find consensus-based compromise solutions designed to reduce tensions and resolve all existing acute crises by political and diplomatic means based on international law.

Russia maintains traditionally friendly relations with all the Gulf countries without exception, and advances interaction with them on the basis of equality and mutual respect. We are convinced that forming an inclusive architecture of peace and security would guarantee a dignified and secure future for all the region’s countries and peoples which need a positive agenda now more than ever.

Back in the late 1990s, under completely different geopolitical realities, Russia began to develop a Collective Security Concept for the Gulf. The ideas presented in the document have been updated several times and took on a whole new dimension in the current circumstances. The concept envisions phased progress towards resolving conflicts based on the equitable efforts of all regional and other stakeholders, developing confidence-building and oversight measures and, ultimately, forming an integrated collective security and cooperation mechanism in this subregion, while also creating appropriate organisational bodies. Such a system can serve as the foundation for building a common post-crisis architecture in the Middle East.

Russia’s proposals are in no way final and represent a kind of invitation to start a constructive dialogue on ways to achieve long-term stabilisation in the Gulf region. We are ready to work closely with all stakeholders both in official settings and in sociopolitical and expert circles.