Since the transfer of sovereignty from the British Empire to the People’s Republic of China, Hong Kong is along with Macao, one of the two Chinese special administrative regions. Under the 1997’s agreements, Beijing established the western democracy in Hong Kong, which had never seen it before. For the first time, the Parliament was elected by the people.

However, while the return of Hong Kong to China marked an improvement in the living conditions of the population, it remained culturally more British than Chinese. This is no surprise to travelers.

The present massive demonstrations must first be understood as the recognition of the cultural impossibility of Chinese unification. They are disturbed by the United Kingdom and the United States, involving a “diplomat” who met and coached the leaders of the protests. We saw the most prominent element of the protests, the Hong Kong Independence Movement, waving the old colonial flag in the middle of a press conference. The same phenomenon was observed in Libya and in Syria where the National Transitional Council adopted the flag of the King Idriss and the Free Syrian Army of the French mandate. 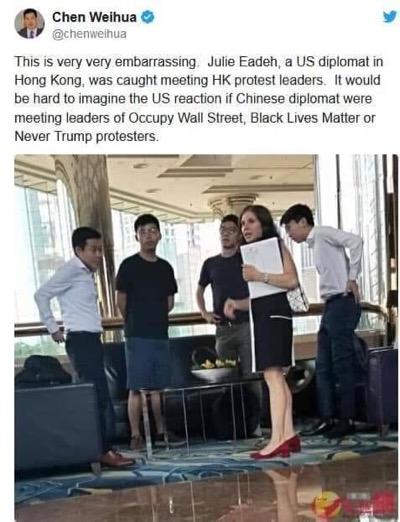