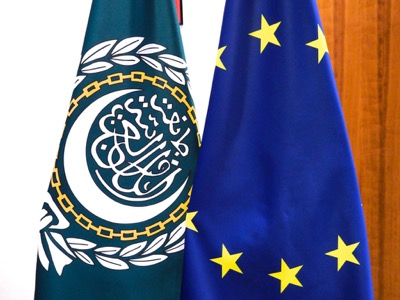 The Chair and the Members of the EU Political and Security Committee and the Permanent Representatives to the League of Arab States held their eight meeting on the 23 January 2020 in Brussels.

The Ambassadors held constructive discussions on topics of mutual interest with a particular focus on the Question of Palestine and building a just and comprehensive peace in the Middle East, on developments of the situations in Syria, Iraq, Yemen, Libya, Lebanon, and Iran, as well as on counter-terrorism issues and its funding, migration issues, refugees and displaced persons. Acknowledging the importance of joining efforts to address common and current political, economic, social, and security challenges which threaten the stability, prosperity and well-being of their common region and the world at large. They reaffirmed the strengthening of the European-Arab partnership as an appropriate regional response and their commitment to effective multilateralism and to an international system based on respect for international law. In this light, they commended the holding of the fifth Joint Ministerial Meeting on 4 February 2019 in Brussels, and the results of the first Arab-European Summit that took place on 24 and 25 February 2019 in Sharm El-Sheikh.

The Ambassadors affirmed the continuation of strengthening cooperation in the framework of the Strategic Dialogue between the General Secretariat of the League of Arab States and the European External Action Service since it’s launching in November 2015, particularly in the fields of conflict prevention, early warning and crisis management, migration, nonproliferation of weapons of mass destruction and arms control.

Preceding the EU-LAS Political Dialogue, on 22 January, the Ambassadors also held the first Joint Retreat which provided an excellent opportunity for an informal exchange of views on the timely issue of climate change and security. The working group sessions on enhancing cooperation between the League of Arab States and the European Union were also convened on the margins of the meeting.

Conscious of the opportunities and the challenges facing Euro-Arab relations, the Chair and the Members of the Political and Security Committee and the Permanent Representatives to the League of Arab States expressed their determination to keep strengthening their cooperation and coordination, and to work together for a safer and better future for all.