The Albert Einstein Institution: non-violence according to the CIA

Non violence as a political action technique can be used for anything. During the 1980s, NATO drew its attention on its possible use to organize the Resistance in Europe after the invasion of the Red Army. It’s been 15 years since CIA began using it to overthrow inflexible governments without provoking international outrage, and its ideological façade is philosopher Gene Sharp’s Albert Einstein Institution. Voltaire Network reveals its amazing activity, from Lithuania to Serbia, Venezuela and Ukraine. 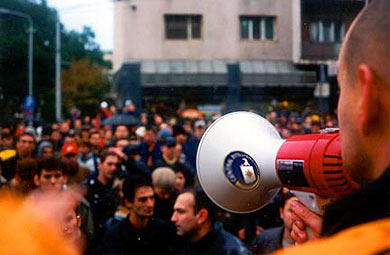 Unknown to the public, Gene Sharp formulated a theory on non violence as a political weapon. Also he first helped NATO and then CIA train the leaders of the soft coups of the last 15 years. Since the 50s, Gene Sharp studied Henry D. Thoreau and Mohandas K. Gandhi’s theory of civil disobedience. For these authors, obedience and disobedience were religious and moral matters, not political ones. However, to preach had political consequences; what could be considered an aim could be perceived as a mean. Civil disobedience can be considered then as a political, even military, action technique.

In 1983, Sharp designed the Non Violent Sanctions Program in the Center for International Affairs of Harvard University where he did some social sciences studies on the possible use of civil disobedience by Western Europe population in case of a military invasion carried out by the troops of the Warsaw Pact. At the same time, he founded in Boston the Albert Einstein Institution with the double purpose of financing his own researches and applying his own models to specific situations. In 1985, he published a book titled "Making Europe Unconquerable " [1] whose second edition included a preface by George Kennan, the Father of the Cold War. In 1987, the association was funded by the U.S. Institute for Peace and hosted seminars to instruct its allies on defense based on civil disobedience. General Fricaud-Chagnaud, on his part, introduced his "civil deterrence" concept at the Foundation of National Defense Studies. [2]

General Edward B Atkeson, seconded by the US Army to the Director of the CIA, [3] integrates the institute into the apparatus of the US stay-behind network interfering in the affairs of allied states. Focusing on the morality of the means of action avoids debate on the legitimacy of the action. Non-violence, accepted as good in itself and an integral part of democracy, facilitates whitewashing of covert actions which are intrinsically non-democratic.

In 1989, when the Albert Institution became well known, Gene Sharp began to advice anticommunist movements. He participated in the establishment of Burma’s Democratic Alliance - a coalition of notable anticommunists that quickly joined the military government - and Taiwan’s Progressive Democratic Party - which favored the independence of the island from communist China, something U.S. officially opposed. He also unified the Tibetan opposition under Dalai Lama and tried to form a dissident group within PLO so that Palestinian nationalists would stop terrorism [4] (he made the necessary arrangements with Colonel Reuven Gal, [5] director of the Psychological Action division of the Israeli armed forces, to train them secretly in the American Embassy in Tel Aviv).

When CIA realized how useful could the Albert Einstein Institution be, it brought Colonel Robert Helvey into play. An expert in clandestine actions and former dean of the Embassies’s Military Attachés Training School, "Bob" took Gene Sharp to Burma to educate the opposition on the non violent strategy for criticizing the cruelest military junta of the world without questioning the system. By doing this, Helvey could identify the "good" and the "bad" opponents in a critical moment for Washington: the true opposition, led by Mrs. Suu Kyi, was labeled as a threat to the pro-American regimen.

«Bob’s» job was easily done. Since he was military attaché in Rangoon from 1983 to 1985 and helped to structure the dictatorship, he knew everybody. By playing a double game, Colonel Helvey simultaneously directed a classical action of military support to Karen resistance: by providing weapons and controlling a limited guerrilla, Washington wished, indeed, to maintain the military junta under pressure.

Since that moment, Sharp has always been present everywhere American interests are put at risk. In June 1989, he and his assistant, Bruce Jenkins, went to Beijing, two weeks before Tiananmen events. They were both expelled by Chinese authorities. In February 1990, the Albert Einstein Institution hosted a Conference on Non Violent Sanctions that brought together 185 experts of 16 countries under Colonels Robert Helvey and Reuven Gal. This marked the beginning of an international anticommunist crusade to involve peoples in non violent action.

Professor Thomas Schelling, [6] well known economist and CIA consultant, joined the Administrative Council of the Institution whose official budget was still stable though it was also funded by the International Republican Institute (IRI), one of the four branches of the National Endowment for Democracy (NED/CIA). [7]

At the same time, Baltic countries proclaimed their independence but, after a test of endurance with Mijail Gorbatchov, they postponed their decision for 2 or 3 years to negotiate their terms. In October 1990, Gene Sharp and his team traveled to Sweden and trained several Lithuanian politicians in the organization of a popular resistance against the Red Army. Months later, in May 1991, when the crisis broke out and Gorbatchov deployed his special forces; Gene Sharp was the adviser of Sajudis separatist party (Perestroika Initiative Group) and remained close to Vytautas Landsbergis. In June 1992, independent Lithuania Minister of Defense, Audrius Butkevicius, hosted a symposium to thank Albert Einstein Institution’s key role during the independence process of the Baltic countries.

When the U.S began its rearmament in 1998, [8] the Albert Einstein Institution became part of an expansionist strategy. It provided ideology and technique to Otpor («Resistance»), a group of Slobodan Milosevic’s young opponents. Simultaneously, it intervened in Kosovo province to train Ibrahim Rugova’s LDK, but it turned useless for Washington during the Kosovo war. Then, Otpor quickly became a choice to overthrow Milosevic who was very popular for resisting NATO. Colonel Helvey trained Otpor’s leaders through seminars hosted at Hilton Hotel in Budapest. Money was not a problem to overthrow Europe’s last communist government. The person in charge of commanding the operation was agent Paul B. McCarthy, discreetly settled at Moskva hotel in Belgrade until Milosevic’s resignation in October 2000.

In September 2002, Gene Sharp went to The Hague to train the members of the Iraqi National Council who were preparing themselves to return to Iraq, along with the American army.

In September 2003, it was also the Albert Einstein Institution who advised the opposition to question the electoral results and go on demonstrations to force Eduard Shevardnadze’s resignation [9] during the «revolution» of the roses in Georgia.

When the CIA-organized-coup against Venezuela failed in April 2002, the State Department counted again on the Albert Einstein Institution which advised the owners of enterprises during the organization of the revocatory referendum against President Hugo Chávez. Gene Sharp and his team led the leaders of Súmate during the demonstrations of August 2004. As done before, the only thing they had to do was questioning the electoral results and demanding the resignation of the president. They managed to get the bourgeoisie out in the street but Chavez’s popular government was to strong. All in all, international observers had no other choice but to recognize Hugo Chávez’s victory.

Gene Sharp failed in Belarus and Zimbabwe for he could not recruit and train in the proper time the necessary amount of demonstrators. During the orange «revolution» in November 2004, [10] we met again with Colonel Robert Helvey in Kiev. Finally, we must point out that the Albert Einstein Institution has begun to train Iranian agitators

But, why Albert Einstein? It is an unsuspicious name. Gene Sharp’s first book on Gandhi’s methods began with a preface signed by Albert Einstein, though the book was written in 1960, five years after the genius’s death. Therefore, Albert Einstein did not write anything for Sharp’s work. All that Sharp did was reproducing an article on non violence written by the scientist.

[2] General Georges Fricaud Chagnaud had been military attaché at the Embassy of France in Washington, and some time later he was appointed Chief of NATO’s French military mission.

[3] General Edward B. Atkeson is currently a CSIS expert and manager of the Association of Former Intelligence Officers (AFIO).

[4] Mubarak Awad, one of the agents formed by Sharp, is currently (January 2005) in charge of the American aid sent to Indonesia after the tsunami.

[5] Nowadays, Colonel Reuven Gal is deputy head of the National Security Council of Israel in charge of molding Palestine society.

[6] In March 2004, Thomas Schelling was one of the drafters of the Copenhagen Consensus. Sponsored by The Economist, this document questioned the UN Millenium Program and the Kyoto Protocol. Mr. Schelling formulated a theoretical model which suggested that economic growth is the best way to combat global warming for, in the future, it should guarantee the development of the necessary techniques to solve the problem.

[8] In 1998 and despite the lack of enemy, the Congres forced President Clinton to implement a rearmament policy.

[10] See Emilia Nazarenko: «Moscow and Washington confronting each other in Ukraine», Voltaire (Text in French), November 1st, 2004. This article was published by Red Voltaire before the first part of the presidential elections and described the organization of the pretended spontaneous movement of the following weeks.

Otpor! leader was working for Stratfor