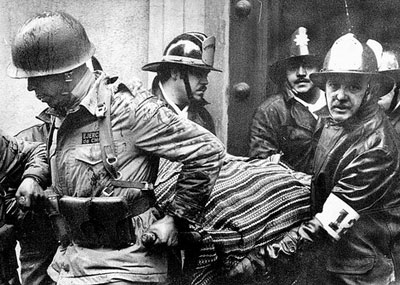 Soldiers and firefighters remove the body of Salvador Allende from the destroyed presidential palace in 1973. (Associated Press / September 11, 1973)

New documents reveal former presidents Richard Nixon of the US and Emilio Medici of Brazil discussed a cooperative effort to topple leftists in Latin America during the cold war.

The formerly secret memos, published by the National Security Archive in Washington on Sunday, showed a desire by the US and Brazil to overthrow leftist governments, including Chile’s Salvador Allende and Cuba’s Fidel Castro.

At a meeting in the Oval Office on Dec. 9, 1971, Nixon said he was willing to offer Brazil the assistance, monetary or otherwise, it might need to rid South America of leftist governments, the White House memorandum of the meeting shows.

The history of the Nixon administration shows that American officials wanted to stop Allende from taking power in 1970, after the US government had publicly stressed the importance of democratic elections there.

Finally, the CIA-supported coup in Chile, led by Gen. Augusto Pinochet, overthrew the government of Allende on Sept. 11, 1973.

Medici’s presidency in Brazil was that of a strong military government marked by strict press censorship, torture and destruction of a guerrilla movement.

In the Oval Office meeting, Nixon said that "this should be held in the greatest confidence. But we must try and prevent new Allendes and Castros and try where possible to reverse these trends."

Medici said he was happy to see that the Brazilian and American positions and views were so close.

Nixon asked if Medici thought the Chilean armed forces were capable of overthrowing Allende, prompting a response from Medici that he felt they were capable.

Nixon also said that "if the Brazilians felt that there was something we could do to be helpful in this area, he would like President Medici to let him know," the document stated.

On Castro, Medici said the large number of Cubans living in the US claimed they could overthrow Castro’s regime, raising the question, "should we help them or not."

Nixon responded that "we should, as long as we did not push them into doing something that we could not support, and as long as our hand in the matter did not show."

Amazon, the Arsonists Shout “Fire”
“The Art of War”

Chilean Miners : What was the TV Show hiding?