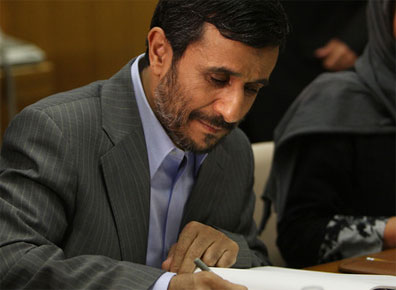 I have the pleasure to offer to Your Excellency my best wishes on the occasion of Nowruz and the beginning of the New Solar Year, 1389. I also wish to seize the moment to praise the efforts initiated by Your Excellency and members of the United Nations General Assembly for the international registration of Nowruz, a cultural event that glorifies humanitarian shared values and principles. I hope this initiative will lay a solid foundation for the spread of Nowruz culture that stands for peace, amity, dynamism, constructive cooperation and sustainable security across the world.

As you are aware, terrorism has emerged today as the most formidable challenges besetting the world community, and many policy­-makings and military actions have been launched on the pretext of fighting terrorism.

You are certainly familiar with the name of Abdulmalik Riggi, a terrorist and gang leader who had used Afghanistan and Pakistan as safe havens over the past years to infiltrate into Iran’s southeast borders for conducting armed robberies and terrorist acts. More than 140 innocent Iranians including women, men and children were killed with the most horrendous methods, and more than 260 were wounded.

Although the international organizations that claim to be advocating human rights, have been silent all this time vis-a-vis these crimes, most deplorable is the measures undertaken by NATO intelligence and security forces in Afghanistan as well as the attitudes of some American and European media in trying to support these crimes and cleanse the blood-stained hands of this criminal and his mercenaries. There is concrete evidence on the involvement of intelligence and security services of at least three countries supporting his terrorist operations.

Some western media that use a small mistake of a police officer- in countries that defy hegemony and imperialistic policies- to raise loud and deafening cries as pretending to be in deep grief for human rights abuse as part of efforts aimed at portraying the barbaric killing of defenseless people as a holy campaign, have either been silent towards all these crimes and brutalities, or have made interviews and featured numerous articles or reports to introduce this murderer as a freedom fighter or a democracy activist.

It is all the more regrettable that terrorism has turned into a tool to subdue nations, and those who allege to be combating terrorism now find themselves at the forefront of supporting’ terrorism.

I have attached to this letter a video featuring, a very small part of the crimes committed by this terrorist, and the way he enjoyed media supports. It also contains part of the confessions he made on the backings provided by NATO members for his activities. As the Secretary General of the United Nations you are expected to take the following measures based on your legal and humanitarian responsibilities, and inform the people of Iran and all nations of its results:

1- Blunt condemnation of crimes and restoration of the rights of the oppressed people of Iran as the main victim of terrorism.

2- Condemnation of the supports given by NATO members for terrorism in the region, official impeachment of all those who officially supported this criminal, and restoration of the rights of victims, and of the government and people of Iran.

3- The arrest by the Iranian Intelligence service of this terrorist who was widely supported by NATO members has made clear the right approach that must be taken to combat terrorism.

Following September 11 attacks, and on the pretext of fighting against a number of terrorist operatives, more than a million people in our region have been victimized and a few more millions been displaced, two members of the United Nations have been occupied by NATO and the American military forces, and a third country is susceptible to military aggressions. The current method of combating terrorism, even if the claims of its proponents are accepted as true, has obviously failed.

"If terrorism nearly exists, isn’t it possible to apply a rational method that has been efficiently used by the Iranian intelligence and security apparatus in dealing with Abdulmalik Riggi. We have emphasized time and again that settlement of problems in our region does not need wide­-scale military expeditions or actions."

Excellency, you are at least expected to appoint an independent fact-finding team which is trusted by the countries of the region, to launch a comprehensive investigation into the main culprits behind the September 11 attacks as principal excuse for attacking the Middle East, the intentions of NATO military presence in Afghanistan and Iraq, the methods used, and the outcome of their presence and engagement, with results to be presented to the General Assembly.

As you know, since the presence of American and NATO forces, not only a few million people were killed, wounded, and displaced, cultivation of illicit crop has also multiplied and the people of our region continue to live under the shadow of threat.

Who or what other organization has the responsibility to support the rights, security and independence of nations in the region. If the United-Nations has no responsibility, it has to announce to the suffering nations that where or what other organization they should raise their complaint or grievances to. If this is the case what is the philosophy behind the establishment of the United Nations?

The expectation is that Your Excellency actively put this issue on your agenda and adopt necessary decisions to put an end to massacres, increasing narcotic production, and occupation.

May God the Almighty bless the entire world with peace and justice.

President of the Islamic Republic of Iran

Statement by Mahmoud Ahmadinejad at the 66th UN General Assembly

Remarks by Mahmoud Ahmadinejad to the 65th UN General Assembly