"In the Interests of Israel": Why Russia will not sell the S-300 Air Defense System to Iran

The sanctions against Iran were the final blow to the Medvedev-Putin partnership, already on the wane for some time. The Russian President has opted for the U.S.-Israeli camp. The outright war between the two excutive heads has crystallized around the possible delivery of the surface-to-air S-300 missiles to Tehran. According to General Leonid Ivashov, former Joint Chief of Staff of the Russian Armed Forces, the Kremlin has turned its back on his country’s strategic interests, throwing himself into the arms of the enemy. 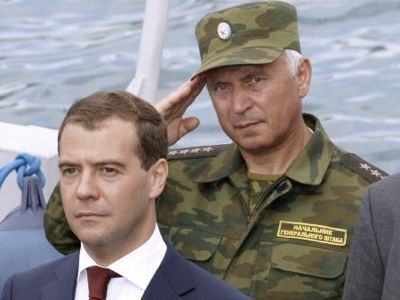 According to Leonid Ivashov, his successor as Joint Chief of Staff of the Russian Armed Forces, Nicolai Makarov, was wrong to bend to President Medvedev’s decision against delivering the S-300 to Iran.

Russian army chief of staff Gen. N. Makarov broke the news on September 22 that Russia will not sell the S-300 air defense systems to Iran. Regardless of official explanations, it does not take an expert to realize that as a purely defensive system designed to shield a country from aircraft and cruise missile attacks the S-300 complexes cannot pose a threat to any country unless it attacks the one owning them.

As for the standoff between Iran and Israel, Tehran is constantly confronted with threats of massive air strikes, and taking steps to prevent the aggression is a must for any country seeking to sustain peace, especially for a permanent UN Security Council member sharing the responsibility for global security. Aggression is least likely in the situation of military parity or if the potential victim is able to inflict unacceptable damage on the aggressor. Iran’s possession of the S-300 complexes could expose Israel’s air forces to the risk of unacceptable damage in case the letter choses to attack the former. Denying Iran the right to efficient means of self-defense is tantamount to encouraging aggression against it. Isn’t Russia thus helping to unleash a disastrous war in the proximity of its own borders, a war against a country which, by the way, hosts a large colony of Russian specialists? On top of that, the refusal to supply the S-300 complexes to Iran clearly hurts Russia’s political and economic interests.

What could be the motivation behind Russia’s recent decision? Obviously, it stems from several regards. Ostensibly unaware of the existence of Israel’ nuclear arsenal, Moscow has for years been playing the game of taming Iran’s alleged nuclear ambitions and voted for sanctions against the country in the UN Security Council. Actually, Tehran proposed a number of times to turn the Middle East into a nuclear-free zone. The plan was welcomed by the majority of the Arab world but seems to be a taboo for Russia’s foreign ministry. Now, why is that?

Igor Yurgens, chief of the Institute of Contemporary Development, a well-connected Russian thinktank, said at the Nixon Center Russia-US roundatable on July 28, 2010 that not everybody in Russia regards the collapse of the USSR as a geopolitical catastrophe (as Russia’s former president and current prime minister V. Putin described the historical development). Yurgens went on to assert that the goal of those who don’t is to integrate Russia into the Euro-Atlantic security architecture and to eventually bring the country to NATO. He praised Russian defense minister A. Serdyukov’s military reform and told that in the nearest future Russia would ­ oddly enough - be importing at least 30% of the weapons and equipment for its army from Israel and NATO countries. Another roundtable speaker from Russia - Gen. V. Dvorkin who, incidentally, paid a visit to Israel a short time ago - urged US senators to OK launching an attack against Iran as soon as possible and even presented a computer model of the conflict to US partners.

Defense ministers of Russia and Israel A. Serdyukov and Ehud Barak signed a first-ever agreement on the military cooperation between the two countries on September 6, 2010. The sides went so far as to include intelligence data swaps in the package, leaving it open to interpretation whether from now on Russia is going to spy on Arab countries, Turkey, and Iran and pass sensitive information to Israel. Whereas in the past the Russian administration sought consensus with Tel Aviv to sell weapons to Middle Eastern countries, currently the impression is that it needs Israel’s explicit sanction for such deals. A similarly absurd arrangement was in effect in the days of the Gore-Chernomyrdin commission when Moscow did not even dare to supply ordinary mechanical equipment to Iran unless Washington greenlighted the deal.

It is an open secret that Israel assisted in organizing and launching the August, 2008 unprovoked Georgian aggression against South Ossetia and the deadly raid against the Russian peacekeepers deployed in the republic. Israeli advisers are in part responsible for the bloodshed, but one gets an impression that these days for Moscow no sacrifices are too great a price for an entry ticket to the Judo-Atlantic civilization.

Decisions like the one announced by Gen. N. Makarov undermine Russia’s prestige and erode its security, making the world less safe for every one of us. At the moment the Islamic world has reasons to believe that Moscow has switched to the camp of its foes. Given the facts that Russia is locked in a protracted conflict in the Muslim part of the Caucasus and that over a million Muslims reside in Moscow, antagonizing Muslims worldwide is the last thing the country needs.

On the whole, Serdyukov’s military reform ­ the structural overhaul, the introduction of the brigade system, the acquisitions of Israeli and NATO weapons, joint Russia-West exercises in the US and in Europe, and the tide of military college closures ­ lead watchers to conclude that the broader plan behind it is to build what still remains of Russia’s army and navy into the US and NATO expedition corps.

Shall we really be taking the riskiest roles in the military escapades of the Anglo-Saxons and of the Israeli Zionist leadership in the name of the shadowy financial oligarchy’s global dominance? Let others judge what authors of the plan deserve.

Source : “"In the Interests of Israel": Why Russia will not sell the S-300 Air Defense System to Iran”, by General Leonid Ivashov, Voltaire Network, 28 September 2010, www.voltairenet.org/article167090.html

General Leonid Ivashov is the vice-president of the Academy on geopolitical affairs. He was the chief of the department for General affairs in the Soviet Union’s ministry of Defense, secretary of the Council of defense ministers of the Community of independant states (CIS), chief of the Military cooperation department at the Russian federation’s Ministry of defense and Joint chief of staff of the Russian armies. He is member of the Axis for Peace conference.

BRICS and the Mission of Reconfiguring the World

Iran: The threat of a nuclear war

Iran Must Get Ready to Repel a Nuclear Attack
Countdown

General Ivashov: “International terrorism does not exist”
Axis for Peace

Source : “"In the Interests of Israel": Why Russia will not sell the S-300 Air Defense System to Iran”, by General Leonid Ivashov, Voltaire Network, 28 September 2010, www.voltairenet.org/article167090.html