General Leonid Ivashov was the Chief of Staff of the Russian armed forces when the September 11, 2001, attacks took place. This military man, who lived the events from the inside, offers an analysis which is very different to that of his American colleagues. As he did during the Axis for Peace 2005 conference, he now explains that international terrorism does not exist and that the September 11 attacks were the result of a set-up. What we are seeing is a manipulation by the big powers; this terrorism would not exist without them. He affirms that, instead of faking a “world war on terror”, the best way to reduce that kind of attacks is through respect for international law and peaceful cooperation among countries and their citizens. 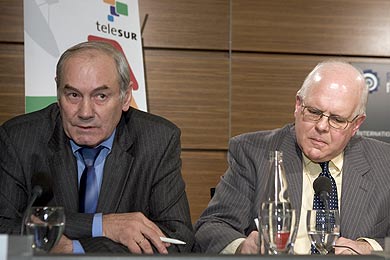 General Leonid Ivashov (left) at the Axis for Peace Conference 2005 in Brussels, with Webster Tarpley

It is globalization what creates the conditions for the emergence of these extremely dangerous phenomena. It is in this context that the new world geo-strategic map is being designed, that the resources of the planet are being re-distributed, that borders are disappearing, that international law is being torn into pieces, that cultural identities are being erased, that spiritual life becomes impoverished...

The analysis of the essence of the globalization process, the military and political doctrines of the United States and other countries, shows that terrorism contributes to a world dominance and the submissiveness of states to a global oligarchy. This means that terrorism is not something independent of world politics but simply an instrument, a means to install a unipolar world with a sole world headquarters, a pretext to erase national borders and to establish the rule of a new world elite. It is precisely this elite that constitutes the key element of world terrorism, its ideologist and its “godfather”. The main target of the world elite is the historical, cultural, traditional and natural reality; the existing system of relations among states; the world national and state order of human civilization and national identity.

Today’s international terrorism is a phenomenon that combines the use of terror by state and non-state political structures as a means to attain their political objectives through people’s intimidation, psychological and social destabilization, the elimination of resistance inside power organizations and the creation of appropriate conditions for the manipulation of the countries’ policies and the behavior of people.

Terrorism is the weapon used in a new type of war. At the same time, international terrorism, in complicity with the media, becomes the manager of global processes. It is precisely the symbiosis between media and terror, which allows modifying international politics and the exiting reality.

In this context, if we analyze what happened on September 11, 2001, in the United States, we can arrive at the following conclusions: 1. The organizers of those attacks were the political and business circles interested in destabilizing the world order and who had the means necessary to finance the operation. The political conception of this action matured there where tensions emerged in the administration of financial and other types of resources. We have to look for the reasons of the attacks in the coincidence of interests of the big capital at global and transnational levels, in the circles that were not satisfied with the rhythm of the globalization process or its direction.
Unlike traditional wars, whose conception is determined by generals and politicians, the oligarchs and politicians submitted to the former were the ones who did it this time.

3. Osama bin Laden and “Al Qaeda” cannot be the organizers nor the performers of the September 11 attacks. They do not have the necessary organization, resources or leaders. Thus, a team of professionals had to be created and the Arab kamikazes are just extras to mask the operation.
The September 11 operation modified the course of events in the world in the direction chosen by transnational mafias and international oligarchs; that is, those who hope to control the planet’s natural resources, the world information network and the financial flows. This operation also favored the US economic and political elite that also seeks world dominance. 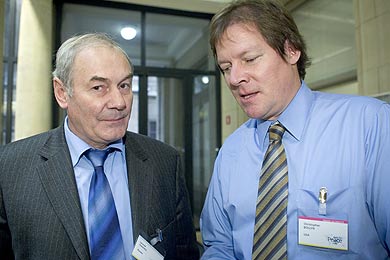 The use of the term “international terrorism” has the following goals:

Hiding the real objectives of the forces deployed all over the world in the struggle for dominance and control;

Turning the people’s demands to a struggle of undefined goals against an invisible enemy;

Depriving peoples of their legitimate right to fight against aggressions and to reject the work of foreign intelligence services;

Establishing the principle of renunciation to national interests, transforming objectives in the military field by giving priority to the war on terror, violating the logic of military alliances to the detriment of a joint defense and to favor the anti-terrorist coalition;

Solving economic problems through a tough military rule using the war on terror as a pretext. In order to fight in an efficient way against international terrorism it is necessary to take the following steps:

To confirm before the UN General Assembly the principles of the UN Charter and international law as principles that all states are obliged to respect;

To create a geo-strategic organization (perhaps inspired in the Cooperation Organization of Shanghai comprised of Russia, China, Kazakhstan, Uzbekistan, Kyrgyzstan and Tajikistan) with a set of values different to that of the Atlantists; to design a strategy of development of states, a system of international security, another financial and economic model (which would mean that the world would again rest on two pillars);

To associate (under the United Nations) the scientific elites in the design and promotion of the philosophical concepts of the Human Being of the 21st Century.

To organize the interaction of all religious denominations in the world, on behalf of the stability of humanity’s development, security and mutual support.

General Leonid Ivashov is the vice-president of the Academy on geopolitical affairs. He was the chief of the department for General affairs in the Soviet Union’s ministry of Defense, secretary of the Council of defense ministers of the Community of independant states (CIS), chief of the Military cooperation department at the Russian federation’s Ministry of defense and Joint chief of staff of the Russian armies. He is member of the Axis for Peace conference.

BRICS and the Mission of Reconfiguring the World

"In the Interests of Israel": Why Russia will not sell the S-300 Air Defense System to Iran

Iran: The threat of a nuclear war

Iran Must Get Ready to Repel a Nuclear Attack
Countdown