If, from a democratic viewpoint, the U.S. Congress is the most corrupt institution in the world, it is irreproachable on the criminal level. In a perfectly lawful way, interest groups have spent 32 523 dollars for every day Congress was in session and on each legislator to buy his vote. An activity that elsewhere would be considered criminal is simply treated as a business in a country that scorns the notion of general interest and where legislative representation caters to the interests of private groups. 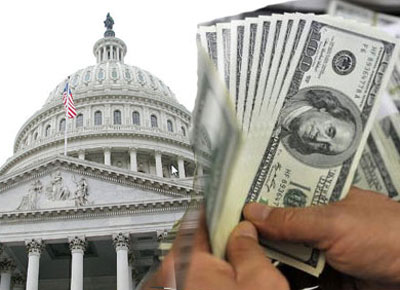 The Center calculates that interest groups spent $17.4 million on lobbying for every day Congress was in session in 2008, or $32,523 per legislator per day. Center director Sheila Krumholz says, “The federal government is handing out billions of dollars by the day, and that translates into job security for lobbyists who can help companies and industries get a piece of the payout.”

Health interests spent more on Federal lobbying than any other economic sector. Their $478.5 million guaranteed the crown for the third year, with the finance, insurance, real estate sector a runner up, spending $453.5 million. The pharmaceutical/health products industry contributed $230.9 million, raising their last eleven-year total to over $1.6 billion. The second-biggest spender among industries in 2008 was electric utilities, which spent $156.7 million on lobbying, followed by insurance, which spent $153.2 million, and oil and gas, which paid lobbyists $133.2 million. Pro-Israel groups, food processing companies, and the oil and gas industry increased their lobbying expenditures the most (as a percentage) between 2007 and 2008.

Finance, insurance and real estate companies have been competing to get a piece of the $700 billion bailout package Congress approved late last year. The companies that reduced lobbying the most are those that declared bankruptcy or were taken over by the federal government and stopped their lobbying operations all together. “Even though some financial, insurance and real estate interests pulled back last year, they still managed to spend more than $450 million as a sector to lobby policymakers. That can buy a lot of influence, and it’s a fraction of what the financial sector is reaping in return through the government’s bailout program,” Krumholz said.

Business and real estate associations and coalitions were among the organizations that ramped up their lobbying expenditures the most last year. The National Association of Realtors increased spending by 25 percent, from $13.9 million to $17.3 million. The American Bankers Association spent $9.1 million in 2008, a 47 percent increase from 2007. Other industry groups that spent more in 2008 include the Private Equity Council, the Mortgage Bankers Association of America and the Financial Services Roundtable.

The US Chamber of Commerce remained the number one spender on lobbying in 2008, spending nearly $92 million—more than $350,000 every weekday, and a 73 percent increase over 2007—to advocate for its members’ interests. Pro-business associations as a whole increased their lobbying 47 percent between 2007 and 2008.

With record spending on lobbying, some industries face serious cut backs and have put the brakes on spending, but have not discontinued the practice. Automotive companies decreased the amount they paid lobbyists by 7.6 percent, from $70.9 million to $65.5 million. This is a big change from prior years; auto manufacturers and dealers increased lobbying spending by 21 percent between 2006 and 2007. Between 2007 and 2008 the Alliance of Automobile Manufacturers, which testified before Congress with Detroit’s Big Three last year, decreased its reported lobbying by 43 percent, from $12.8 million to $7.3 million. Of the Big Three, only one company, Ford, increased its efforts, though not by much: it went from $7.1 million to $7.7 million, an 8 percent increase.

Among Washington lobbing firms, Patton Boggs reported the highest revenues from registered lobbying for the fifth year in a row: 41.9 million dollars, an increase over 2006 of more than 20 percent. The firm’s most lucrative clients included private equity firm Cerberus Capital Management, confection and pet food maker Mars, communication provider Verizon, pharmaceutical manufacturers Bristol-Myers Squibb and Roche, and the American Association for Justice (formerly the Association of Trial Lawyers of America).

It seems like this should be a classified ad: “Laid off and looking for work? The lobbying industry wants you!” Since we posted this story on OpenSecrets.org in January, the lobbying industry has only continued to grow, even as industries across the board have continued to shrink, forcing hundreds of thousands of Americans out of work. This growth could be attributed in part to the economy itself—many executives are looking for some help from the government to keep their businesses afloat. Others are simply taking advantage of the opportunities that a spate of government handouts has presented. But as long as there’s a federal government calling the shots, lobbyists will be paid more and more each year to hold their clients’ fire to lawmakers’ feet.

Year after year we see increases in lobbying expenditures—in fact, 100 percent over the last decade—and the flurry of activity during the first three months of 2009 indicates that the trend won’t come to an end any time soon. Based on records from the Senate Office of Public Records, the nonpartisan Center for Responsive Politics found that from January through March, lobbying increased slightly compared to the same period of time last year, by at least $2.4 million. Unions, organizations and companies spent at least $799.7 million so far this year on sending influence peddlers to Capitol Hill, compared to $797.2 million during the same time in 2008. That might seem like a small increase compared to the billions spent each year on this activity, but in a time of economic turmoil, that’s a hefty revenue stream for a single industry.

That said, the industries that have made the most headlines for the help they’ve asked for or received from the federal government actually decreased the amount they spent on lobbying in the first three months of 2009 compared to 2008. Recipients of cash from the federal government’s Troubled Asset Relief Program (TARP) handed out less money to lobbyists than they had in any quarter of 2008, in part, perhaps, because they faced new rules restricting their lobbying contact with officials in connection with the bailout program. CRP found that TARP recipients have spent $13.9 million on lobbying so far this year, compared to $20.2 million in January through March of last year and $17.8 million in the last three months of 2008. With the government doling out billions of dollars, these sums pale in comparison to the benefit the companies are reaping. [3]

[2] Note by the Editor: a euphemism for pressure groups that exert influence on Federal and State governments, i.e. Congress, the White House and the courts.

[3] To read more about how lobbying and influence peddling are shaping legislation, keep up with CRP’s blog at http://www.opensecrets.org/news/.

US Congress Sells Out to Wall Street