The story on the surface makes for a script for a new Oliver Stone Hollywood thriller. However, a closer look at the details of what has so far been carefully leaked by the most ultra-establishment of international media such as the New York Times reveals a clear agenda. That agenda coincidentally serves to buttress that of US geopolitics around the world from Iran to North Korea. The Wikileaks is a big and dangerous US intelligence Con Job which will likely be used to police the Internet. 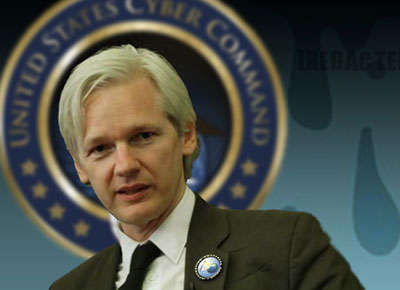 It is almost too perfectly scripted to be true. A discontented 22-year old US Army soldier on duty in Baghdad, Bradley Manning, a low-grade US Army intelligence analyst, described as a loner, a gay in the military, a disgruntled “computer geek,” sifts through classified information at Forward Operating Base Hammer. He decides to secretly download US State Department email communications from the entire world over a period of eight months for hours a day, onto his blank CDs while pretending to be listening to Lady Gaga. In addition to diplomatic cables, Manning is believed to have provided WikiLeaks with helicopter gun camera video of an errant US attack in Baghdad on unarmed journalists, and with war logs from Iraq and Afghanistan.

Manning then is supposed to have tracked down a notorious former US computer hacker to get his 250,000 pages of classified US State Department cables out in the Internet for the whole world to see. He allegedly told the US hacker that the documents he had contained "incredible, awful things that belonged in the public domain and not on some server stored in a dark room in Washington, DC." The hacker turned him in to US authorities so the story goes. Manning is now incommunicado since months in US military confinement so we cannot ask him, conveniently. The Pentagon routinely hires the best hackers to design their security systems.

Then the plot thickens. The 250,000 pages end up at the desk of Julian Assange, the 39-year-old Australian founder of a supposedly anti-establishment website with the cute name Wikileaks. Assange decides to selectively choose several of the world’s most ultra-establishment news media to exclusively handle the leaking job for him as he seems to be on the run from Interpol, not for leaking classified information, but for allegedly having consensual sex with two Swedish women who later decided it was rape.

He selects as exclusive newspapers to decide what is to be leaked the New York Times which did such service in promoting faked propaganda against Saddam that led to the Iraqi war, the London Guardian and Der Spiegel. Assange claims he had no time to sift through so many pages so handed them to the trusted editors of the establishment media for them to decide what should be released. Very “anti-establishment” that.

The New York Times even assigned one of its top people, David E. Sanger, to control the release of the Wikileaks material. Sanger is no establishment outsider. He sits as a member of the elite Council on Foreign Relations as well as the Aspen Institute Strategy Group together with the likes of Condi Rice, former Defense Secretary William Perry, former CIA head John Deutch, former State Department Deputy Secretary and now World Bank head Robert Zoellick among others.

Indeed a strange choice of media for a person who claims to be anti-establishment. But then Assange also says he believes the US Government version of 9/11 and calls the Bilderberg Group a normal meeting of people, a very establishment view.

Not so secret cables…

The latest sensational Wikileaks documents allegedly from the US State Department embassies around the world to Washington are definitely not as Hillary Clinton claimed "an attack on America’s foreign policy interests that have endangered innocent people." And they do not amount to what the Italian foreign minister, called the "September 11 of world diplomacy." The British government calls them a threat to national security and an aide to Canada’s Prime Minister calls on the CIA to assassinate Assange, as does kooky would-be US Presidential hopeful Sarah Palin.

Most important, the 250,000 cables are not "top secret" as we might have thought. Between two and three million US Government employees are cleared to see this level of "secret" document, [1] and some 500,000 people around the world have access to the Secret Internet Protocol Router Network (SIPRnet) where the cables were stored. SIPRnet is not recommended for distribution of top-secret information. Only 6% or 15,000 pages of the documents have been classified as even secret, a level below top-secret. Another 40% were the lowest level, "confidential", while the rest were unclassified. In brief, it was not all that secret. [2]

Most of the revelations so far have been unspectacular. In Germany the revelations led to the removal of a prominent young FDP politician close to Guido Westerwelle who apparently liked to talk too much to his counterpart at the US Embassy. The revelations about Russian politics, that a US Embassy official refers to Putin and Medvedev as “Batman and Robin,” tells more about the cultural level of current US State Department personnel than it does about internal Russian politics.

But for anyone who has studied the craft of intelligence and of disinformation, a clear pattern emerges in the Wikileaks drama. The focus is put on select US geopolitical targets, appearing as Hillary Clinton put it “to justify US sanctions against Iran.” They claim North Korea with China’s granting of free passage to Korean ships despite US State Department pleas, send dangerous missiles to Iran. Saudi Arabia’s ailing King Abdullah reportedly called Iran’s President a Hitler.

Excuse to police the Internet?

What is emerging from all the sound and Wikileaks fury in Washington is that the entire scandal is serving to advance a long-standing Obama and Bush agenda of policing the until-now free Internet. Already the US Government has shut the Wikileaks server in the United States though no identifiable US law has been broken.

What is emerging from all the sound and Wikileaks fury in Washington is that the entire scandal is serving to advance a long-standing Obama and Bush agenda of policing the until-now free Internet. Already the US Government has shut the Wikileaks server in the United States though no identifiable US law has been broken.

The process of policing the Web was well underway before the current leaks scandal. In 2009 Democratic Senator Jay Rockefeller and Republican Olympia Snowe introduced the Cybersecurity Act of 2009 (S.773). IIt would give the President unlimited power to disconnect private-sector computers from the internet. The bill "would allow the president to ’declare a cyber-security emergency’ relating to ’non-governmental’ computer networks and do what’s necessary to respond to the threat." We can expect that now this controversial piece of legislation will get top priority when a new Republican House and the Senate convene in January.

The US Department of Homeland Security, an agency created in the political hysteria following 9/11 2001 that has been compared to the Gestapo, has already begun policing the Internet. They are quietly seizing and shutting down internet websites (web domains) without due process or a proper trial. DHS simply seizes web domains that it wants to and posts an ominous "Department of Justice" logo on the web site. See an example at http://torrent-finder.com. Over 75 websites were seized and shut in a recent week. Right now, their focus is websites that they claim "violate copyrights," yet the torrent-finder.com website that was seized by DHS contained no copyrighted content whatsoever. It was merely a search engine website that linked to destinations where people could access copyrighted content. Step by careful step freedom of speech can be taken away. Then what?