If it were not for the fact that the lives of some 45 million people are at stake, Ukrainian national politics could be laughed off as a very sick joke. Any pretenses that the October national elections would bring a semblance of genuine democracy of the sort thousands of ordinary Ukrainians demonstrated for on Maidan Square just one year ago vanished with the announcement by Victoria Nuland’s darling Prime Minister, “Yat” Yatsenyuk, of his new cabinet. 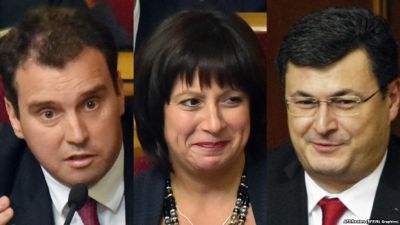 The US-picked Ukraine President, billionaire oligarch Petro Poroshenko called “snap” elections at the end of August for October 26. He did so to make sure genuine opposition to his regime of murderers, gangsters and in some cases outright Nazis would be able to push an unprepared genuine opposition out of the Verkhovna Rada or Parliament. Because the parliament had significant opposition parties to the US-engineered February 22 coup d’Etat, they had blocked many key pieces of legislation that the Western vultures were demanding, from changing key land ownership laws to privatization of precious state assets. By law, the old parliament would have sat until its five year term ended in October, 2017. That was clearly too long for State Department neo-con Ukraine puppet-mistress Victoria Nuland and her backers in Washington.

Now, with a new parliament that is controlled by the Petro Poroshenko bloc as largest party and the boyish-looking former Prime Minister Arseniy Yatsenyuk, who is also new Prime Minister as head of the second largest party, the way was clear to get on with the rape of Ukraine. What shocked some is the blatant foreign takeover that followed, like a Wall Street vulture fund raid on a distressed debtor country of the Third World.

Yatsenyuk, former finance minister in a previous criminal regime, and a suspected senior member of the US-intelligence-friendly “Church of Scientology,” has named three complete foreigners as cabinet ministers in key economic posts. And in an extraordinary act, the three have been made instant Ukrainian citizens by Poroshenko in a ridiculous ceremony. Ukraine is looking more and more like the US-occupied Philippines after the Spanish-American War of 1898 when General Arthur MacArthur, father of the mentally-dis-ordered Douglas, was Washington’s dictator on the spot.

The new Ukrainian Finance Minister, the one who will control the money and decides where it goes, is one Natalia A. Jaresko. She speaks fluent Ukrainian. Only problem—she is an American citizen, a US State Department veteran who is also a US investment banker. Now, the Ukrainian Constitution, prudently enough, stipulates that government ministers be Ukrainian. How then does our sweet Natalia come in?

The President of Ukraine, another Victoria Nuland favorite, the “Chocolate King” corrupt oligarch billionaire, Petro Poroshenko, made her a Ukrainian citizen in a bizarre ceremony the same day just hours before the parliament declared her Finance Minister.

In justifying his astonishing move, Poroshenko declared, “There are absolutely extraordinary challenges facing Ukraine…All this requires innovative solutions in the government…These decisions mean searching for candidates for the new government not only in Ukraine but also abroad.”

Forget your earlier silly schoolbook notions about how a democracy and a nation function. This is the age of no nation state, of private capital taking over the world for sake of profit. Looting über alles is the motto. The nation of Ukraine is being put on the auction bloc to be privatized anyway, so it makes sense that the auctioneers at the US State Department head-hunt the ones to do the inside job of preparing that auction wherever they find the willing executioners. And because what the privatizers have planned, it is easier to believe a non-Ukrainian would let the country be raped easier than a native Ukrainian, even corrupt natives.

In her acceptance speech Jaresko declared, “The new team aims to change the country, to improve its transparency and to eliminate corruption. The members of the team are ready to deal with the challenges Ukraine faces today. This is a government of professionals and technocrats, and we intend to work. I’ve been living in Ukraine for 22 years and until this day I was the head of a large company that controlled three investment funds.,” she told Ukrainian television news service TSN.

What Jaresko did not say was that she had been sent to Ukraine 22 years before as a member of the US State Department.

Jaresko’s qualifications for the job fit the requirements of a vulture fund rapist banker. She was founder and CEO of Horizon Capital Associates, LLC. Her Horizon Capital is “a private equity and venture capital firm specializing in early stage, buyouts, growth capital, and expansion opportunities. It prefers to invest in financial services, fast moving consumer goods, retail, and industrial goods sectors. It typically invests in mid-cap companies based in Ukraine, Belarus, and Moldova,” according to Business Week. They were founded in 1995 and have offices in Kiev. Jaresko is also at the same time CEO of a private equity fund WNISEF.

WNISEF or Western NIS Enterprise Fund is a $150 million private equity fund, active in Ukraine and Moldova investing in small and medium-sized companies. Since its inception, “WNISEF has invested approximately $168 million in 118 companies in the region in a range of industries with a concentration on fast moving consumer goods, construction materials, packaging, retail, and financial services. WNISEF is managed by Horizon Capital Associates, LLC. WNISEF was established by the US Congress and funded by the US government via US Agency for International Development (USAID).”

Before she founded Horizon and WNISEF, the Harvard-trained Jaresko worked for the US State Department in the IMF-steered looting of the country that began just after the US-inspired collapse of the Soviet Union in 1991. From 1992-1995 she was Chief of the Economic Section of the US Embassy in Kiev. When US-backed Viktor Yushchenko was installed via Washington’s “Orange Revolution” as President in 2004, Jaresko served on his Foreign Investors Advisory Council.

US State Department deputy spokeswoman, former CIA spokeswoman Marie Harf has already denied Washington had any hand in her appointment. Of course she would never lie.

Another foreign banker as Economy Minister

Apparently not satisfied that only one investment banker as Finance Minister would suffice, Nuland’s Washington friends have installed Aivaras Abromavicius, a Lithuanian investment banker, to be Economy Minister. According to the official US Government propaganda site, Radio Free Europe—the old CIA Cold War propaganda news service still exists, with its old name as kind of a sick joke—Abromavicius, born in Vilnius, Lithuania, has worked in Kyiv since 2008 as partner and fund manager at the East Capital asset management group. East Capital reportedly has invested almost $100 million in 2012 in Ukrainian projects. It would be interesting to know whose money. Abromavicius describes himself as a Ukrainian patriot (sic!), and has pledged “radical measures.”

East Capital is a Sweden-based “frontier markets” fund active in 25 emerging market countries. The founder of Abromavicius’ East Capital is Peter Elam Håkansson according to their website. Before that Håkansson held leading positions with the Swedish Wallenberg family’s Enskilda Securities.

And a Georgian Health Minister

Rounding out the bizarre new Cabinet of Yatsenyuk is Alexander Kvitashvili, a Georgian. Kvitashvili was health minister in Georgia between 2008 and 2010, under then-President Mikheil Saakashvili, like Yushchenko, another US-installed corrupt puppet President from the US-financed Rose Revolution of 2003. Kvitashvili studied and worked in the United States before becoming Georgia’s health minister.

According to Radio Free Europe, “Yatsenyuk has tasked Kvitashvili with introducing sweeping reforms to tackle rampant corruption among health authorities.” However, the designated corruption-fighter has one handicap: he does not speak the Ukrainian language. That doesn’t matter apparently, as he has stated that he has a “deep respect for Ukraine and its people.” More than that, a corruption-fighting health minister in Ukraine these days apparently doesn’t need.

Rape of an entire country, just as rape of a small child, is murder. It is a form of murder of the soul and ultimately of the child. Forty five million Ukrainians do not deserve such treatment any more than an innocent four-year-old child does.