By organizing in Iraq and Syria the first war leading to a decline in oil prices, the Obama administration’s intention was probably to cripple its adversaries’ economies: Russia, Iran and Venezuela. But this policy can have severe unintended consequences in other areas: acceleration of China’s development, threats to the dollar’s value and a challenge to the economic model predicated on an illusory shale oil bonanza. For William Engdhal, this last manipulation is perhaps the straw that will break the camel’s back. 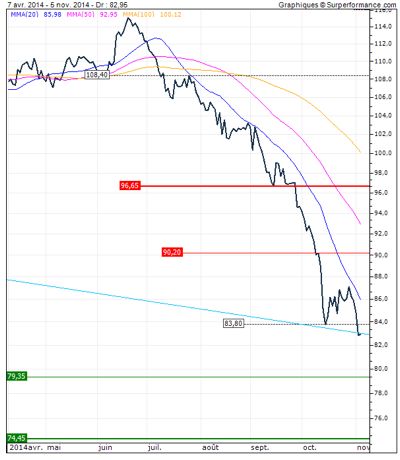 The collapse in US oil prices since September may very soon collapse the US shale oil bubble and tear away the illusion that the United States will surpass Saudi Arabia and Russia as the world’s largest oil producer. That illusion, fostered by faked resource estimates issued by the US Department of Energy, has been a lynchpin of Obama geopolitical strategy.

Now the financial Ponzi scheme behind the increase of US domestic oil output the past several years is about to evaporate in a cloud of fictitious smoke. The basic economics of shale oil production are being ravaged by the 23% oil price drop since John Kerry and Saudi King Abdullah had their secret meeting near the Red Sea in early September to agree on the Saudi oil price war against Russia.

Wall Street bank analysts at Goldman Sachs just issued a 2015 forecast that US oil prices, measured by a benchmark called WTI (West Texas Intermediate) will fall to $70 a barrel. In September 2013, WTI was more than $106 a barrel. That translates into a sharp 34% price collapse in just a few months. Why is that critical to the US shale production? Because, unlike conventional crude oil deposits, shale oil or tight oil as industry calls it, depleted dramatically faster.

A comprehensive new analysis just issued by David Hughes, a Canadian oil geo-scientist with thirty years’ experience with the Geological Survey of Canada, using data from existing US shale oil production that has now become public for the first time (the shale oil story is very recent), shows dramatic rates of oil volume decline from US shale oil wells:

“The three year average well decline rates for the seven shale oil basins measured for the report range from an astounding 60-percent to 91-percent. That means over those three years, the amount of oil coming out of the wells decreases by that percentage. This translates to 43-percent to 64-percent of their estimated ultimate recovery dug out during the first three years of the well’s existence. Four of the seven shale gas basins are already in terminal decline in terms of their well productivity: the Haynesville Shale, Fayetteville Shale, Woodford Shale and Barnett Shale.”

A decrease in oil daily of between 60% and 91% for these best possible shale oil regions means the oil companies must drill deeper to even stay still with oil production, let alone increase total oil volume. That means the drillers must spend more money to drill deeper, a lot more. According to Hughes, the Obama administration Department of Energy has uncritically taken rosy forecast numbers given them by the companies that boost the US shale oil myth. His calculations show future US shale oil output only 10% that estimated for 2040 by the Energy Department.

Hughes describes the current deadly dilemma of the shale oil companies as a “drilling treadmill.” They must drill more and more wells just to keep production levels flat. The oil companies have already gone after the most promising shale oil areas, so-called “sweet spots,” to maximize their production. Now as production begins to decline terminally, they must start drilling in spaces with less rich oil and gas returns. He adds, “if the future of U.S. oil and natural gas production depends on resources in the country’s deep shale deposits…we are in for a big disappointment.”

What Hughes describes was the state of shale oil before the start of the Kerry-Abdullah Saudi oil price war. Now US WTI oil prices have dropped a catastrophic 25% in six weeks, and still falling. Other large oil producers like Russia and Iran are in turn flooding the world market with their oil to increase revenue for their state budgets, adding to a global oil supply glut. That in turn pressures prices more.

The shale oil and gas bonanza of the past five years in the USA has been built on a foundation of zero Federal Reserve interest rates and huge speculative investment by hungry Wall Street firms and funds. Because of the ultra-rapid oil well depletion, when market oil prices collapse, the entire economics of lending to the shale oil drillers collapses as well. Money suddenly vanishes and debt-strapped oil companies begin real problems.

According to Philip Verleger, former head of President Carter’s Office of Energy Policy and now an energy consultant, in North Dakota’s Bakken shale, one of the most important new shale oil regions, oil at $70 a barrel could cut production 28 percent to 800,000 barrels a day by February from 1.1 million barrels a day in July. “The cash flow will go down as the prices go down, the amount of money advanced to these people to continue the drilling will dry up entirely, so you’ll see a marked slowdown in drilling,” said Verleger.

The end of the shale oil bubble would deal a devastating blow to the US oil geopolitics. Today an estimated 55% of US oil production and all the production increase of the past several years comes from fracking for shale oil. With financing cut off because of economic risk amid falling oil prices, shale oil drillers will be forced to halt new drilling that is needed merely to maintain a steady oil output.

The aggressive US foreign policy in the Middle East—its war against Syria’s al-Assad regime, its hardball oil sanctions against Iran, its sanctions against Russian oil projects, its cynical toleration of ISIS in Iraqi oil regions, its refusal to intervene to stabilize the Libyan oil economy but instead to tolerate dis-order are all premised on a cocky view in Washington that the USA is once again the King of Oil in the world and can afford to play high-risk oil geopolitics. The official government agency responsible for advising the CIA, Department of Defense, State Department and White House on energy, the US Department of Energy, has issued projections of US shale oil growth based on myths and lies. That has led the Obama White House to launch oil wars based on those same myths and lies about the rosy prospects of shale oil.

This oily arrogance was epitomized in a speech by then Obama National Security Adviser Tom Donilon. In an April 2013 speech at Columbia University, Donilon, then Obama’s national security adviser, publicly expressed this: “America’s new energy posture allows us to engage from a position of greater strength. Increasing US energy supplies acts as a cushion that helps reduce our vulnerability to global supply disruptions and price shocks. It also affords us a stronger hand in pursuing and implementing our international security goals.”

The next three or so months in the US shale oil domain will be strategic.